Buying provisions before setting off for the Wakatobi group of islands was a shopping trip with a difference.
First diesel – no going to a garage and using a petrol pump, we bought ours behind a shop from a barrel and  the guy siphoned out the diesel by first sucking on the pipe. 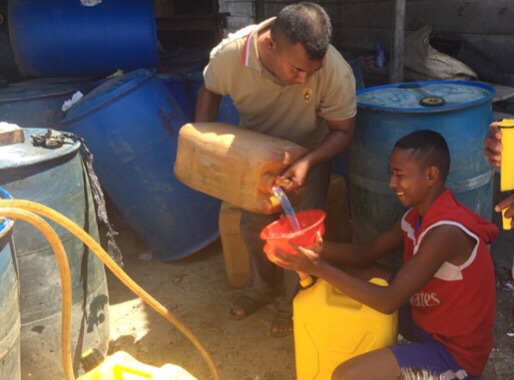 Fruit and vegetables next – all the little stores sold almost identical items, all presented the same way. We decided to spread our custom around and bought tomatoes and cucumber at one, bananas and oranges at another and pumpkin and eggplant at another.

Then fishing tackle – the lady in the shop was so excited that we were there that she was literally jumping up and down. All she wanted to do was take photos.

When Jonathan wanted to buy a few items she almost did a jig and was calling out to all the shop keepers in the street! Must have been a long time between customers!

We had two extra crew aboard or this leg of the trip – Tim and Pim, from Lymington on the South coast of England.


The yacht they were travelling on had offered a berth to a an English girl who had fallen out with the Skipper of the boat she had been crewing on. As it would have been a squash for five on their boat we offered them a spot for the two-night sail to Hoga Island in the Wakatobi group,
It was lovely having them aboard and besides being great company were very experienced sailors and were able to take shifts on each of the nights which was great for us.
At sunset on the first night of this trip, I was standing on the seat gazing forwards over the sea bathed in gold when suddenly I saw a massive pod of dolphins spread across the sea – maybe 40 or 50 of them. Every now and then about five or six of them would hurl themselves exuberantly clean out of the water, high into the air. Some of them turned and passed the boat but a huge group of them came to the boat and played in the bow wave for quite a long time. Wonderful! 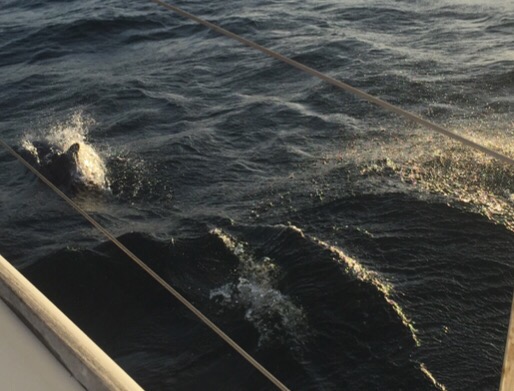 Had a great sail and unexpectedly had really fair winds so we arrived early at Hoga Island. As the anchorage is surrounded by a massive coral reef we had to come in through the channel during daylight. In fact we realised afterwards that we had totally mistimed our approach.

When there is coral you should come in when the sun is high in the sky so you can identify the coral areas by the colour of the water.
Fortunately the skipper of one of the boats in the anchorage was able to talk us in but we did sustain a slight ding to the rudder when Jonathan reversed the boat onto the reef we had just avoided because the depth sounder suddenly said we had very little water under the keel. Only a small ding and a slightly bigger dent in Jonathan’s ego!
The difficult entry was absolutely worthwhile as the Hoga Island anchorage is heavenly!