We were amongst the last of 48 boats to arrive at Maumere, on the island of Flores, a place the whole rally fleet had to visit to renew our visas, so the anchorage outside the SeaWorld Dive Resort was pretty full.

We ended up anchoring in about 25 metres of water – a long, long way down! Despite being in such deep water, the dinghy ride to the beach was easy and not too long.


SeaWorld Dive Resort was really fantastic (no rides no dolphin acts!) – a very laid back quiet place with long tables on the sand under palm trees and a good supply of cold beer.


The resort was founded by an Italian family and purchased by Father Heinrich Bollen, a Catholic priest, in 1981. All profits from the resort go to YASPEM, a foundation for social development started by Father Bollen.

The foundation runs orphanages and children’s homes in Maumere and helps support students of any religion or denomination (not just Catholic) with their educational costs.

As well as enjoying lots of meals and drinks in the beach bar, we had a fantastic two-day, one night trip to the renowned three coloured lakes at Mt Kelimutu in the centre of Flores.


The trip had many highlights – The first was visiting the Port of Maumere and seeing the craft that ply their trade around the many nearby islands.


We then walked through the stilt village near the port. The people were so welcoming and friendly and proudly showed their new mosque being built at the end of a precarious walkway made from bamboo poles strapped together. 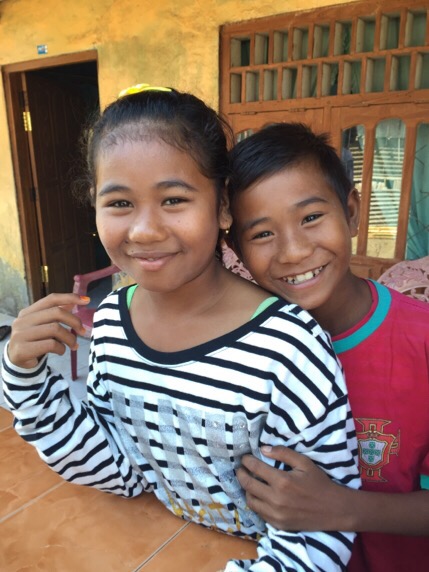 Being Moslem, the villagers here are in a minority as Flores is 90 per cent Christian in contrast to the rest of Indonesia which is roughly 80 per cent Moslem. However, there was no angst or unrest here, and according to our driver Dus, the Muslims live side by side with their Christian neighbours very peaceably.

This was further confirmed when we visited an 18 metre high statue of Mary, Mother of Jesus, perched high on a mountain top. Dus told us that twice a year big celebrations happen at the site of the statue, when there are special processions followed by mass. He then told us that when this happens the local Muslim people come and help clean and prepare the grounds for the visitors and organise the car parking for all the attendees! 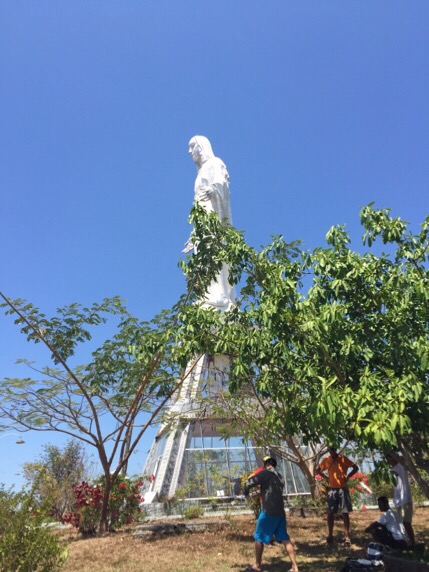 Apparently the Christian population assist in a similar way when the Muslims have a big event.


Another absolute highlight was stopping at gorgeous Paga Beach for the best lunch we have had so far in Indonesia. The beach was reached via a long and rough track through coffee and coconut plantations and as we reached the end of the track leaving the mass of greenery behind, we were treated to the spectacular view of not only a lovely beach but also a splendid and placid bay around a small headland. 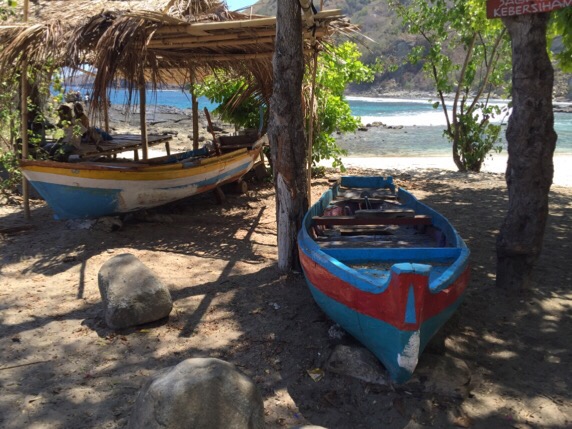 Much to everyone’s delight there were two men building a boat – using a traditional adze and seemingly measuring by eye. 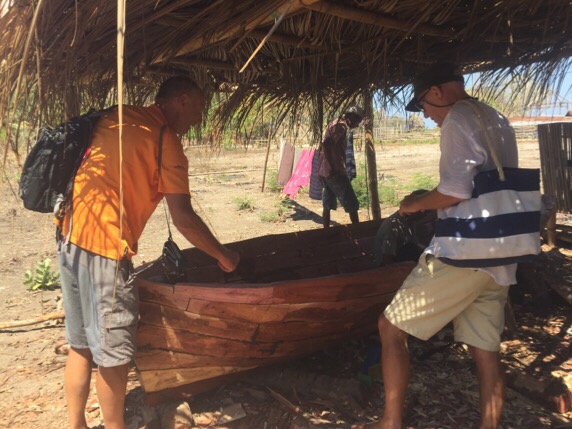 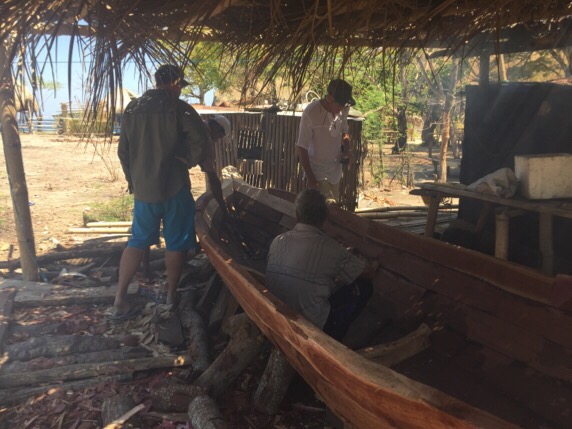 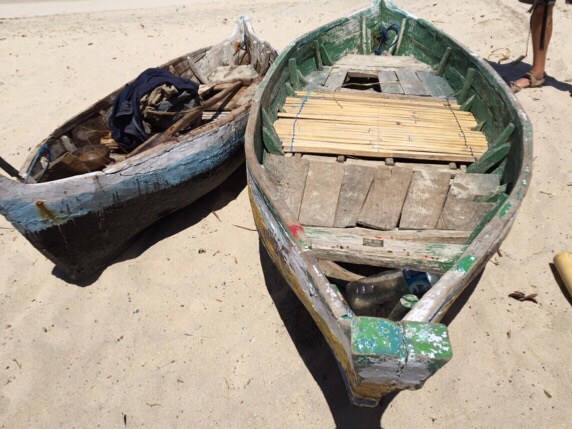 While we watched the men at work, wandered the bay and enjoyed a cold beer, Agustinus, proprietor of the fabulous Restaurant Laryss, a tumbledown, beachfront fish joint, slaughtered and plucked a chicken in preparation for jointing and cooking, and cooked two types of fish (we had seen them earlier lying in one of the little fishing boats, freshly caught) over an open coconut husk fire.

Our driver Duss helped cook the chicken and fish (with ginger, lime and turmeric) and he also made the stir fried vegetables and noodles. The meal, served with red rice which has an excellent flavour, was just superb.

On the long haul up the mountain we happened to be diverted down a side road as there had been a bit of a landslide on the road ahead. This turned out to be an excellent opportunity to visit a village off the tourist track.


It was amazing to see the traditionally built houses and spend a short while with some of the residents. 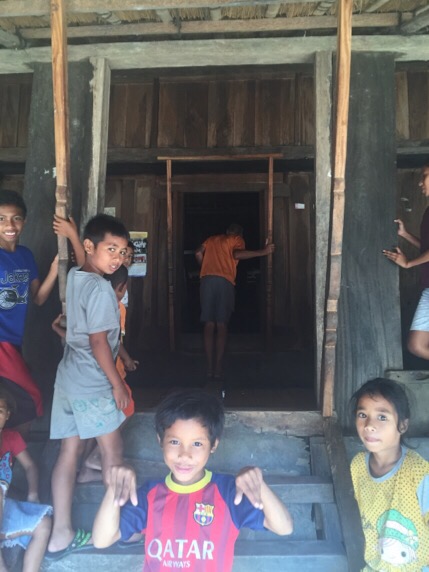 Although mostly Catholic, we learnt quickly that the majority of the population in this area also continue practising traditional ancestor worship.

Outside many of the houses along the roadside there were elaborate tombs which adults sat on and chatted, children played on, and which seemed to be used as part of daily life. Rather nice to think that the ancestors are included in daily conversations, decision making and general family life!

When we arrived at the village of Moni where we were spending the night, we went first to see some beautiful waterfalls very close to where we were staying.

After a long shower we went for a meal at a new restaurant owned by a friend of our driver. The food wasn’t great but there was an excellent band who played some great music (including a lot of Bob Marley).

The next day we were up at 4am to drive up the long and winding track to Mt Kelimutu and then trek for about half an hour up steps and steep paths to where we could view the three summit crater lakes at sunrise. 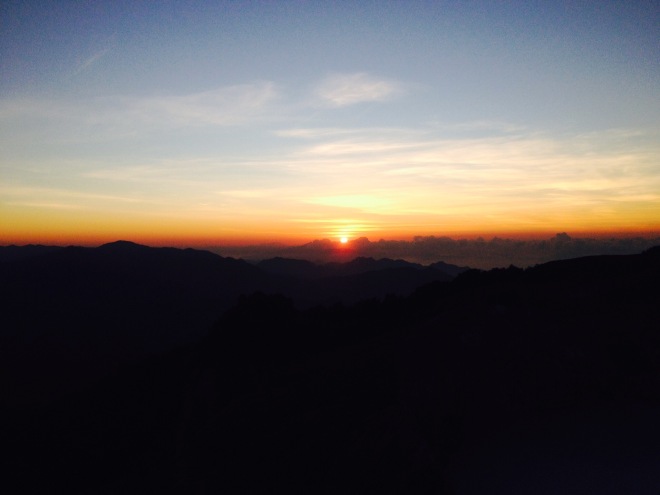 The three lakes are all a different colour and change throughout the day and at different times of the year and are a really remarkable sight.
Tiwu Ata Bupu (Lake of Old People) is usually blue and is the westernmost of the three lakes. It’s where the local people believe that spirits of old people go when they die.


The other two lakes, Tiwu Ko’o Fai Nuwa Muri (Lake of Young Men and Maidens) and Tiwu Ata Polo (Bewitched or Enchanted Lake where evil spirits are sent) are are separated by a shared crater wall and are typically green or red. 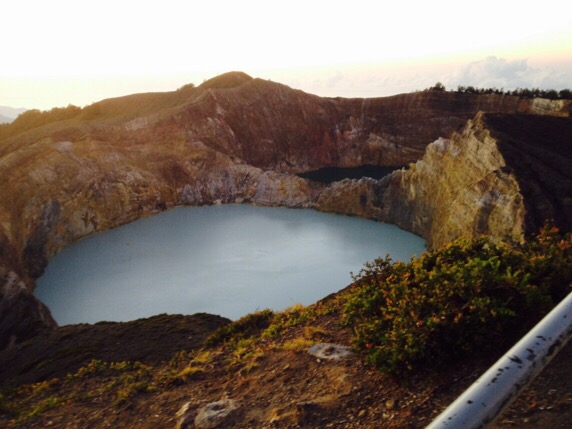 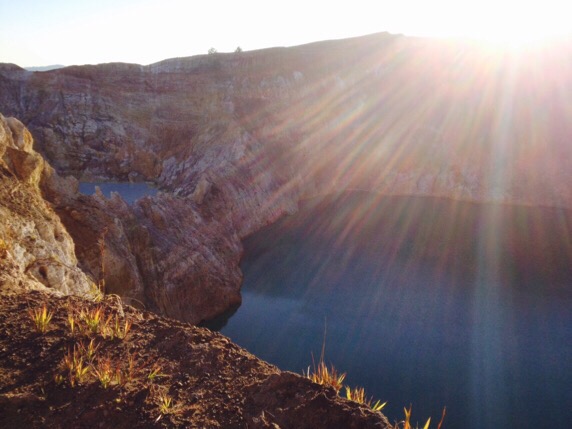 We stayed at the summit for about an hour after sunrise and then went to a lower lookout where it was a bit warmer, for a while.
As we walked down the mountain to the car we heard some wonderful bird song. Our driver told us that one bird – the Gerugiwa (Monarcha sp), often called bird of the soul, produced between 10 and 15 different melodies. It was really very beautiful.

After breakfast (delicious banana pancakes) we were taken to Saga traditional village. Although the houses set round the tombs of ancestors are built in traditional style many of them are newly built or refurbished following a fire started by an elderly woman who didn’t douse her cooking fire properly. 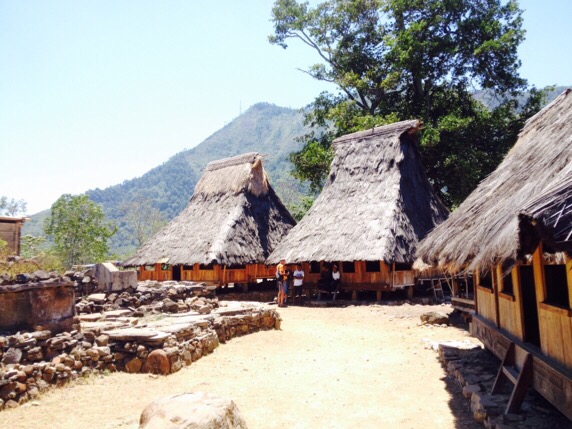 As it so happened, a ceremony (with animal “sacrifices”) had only just occurred and the owners of the houses were gradually moving back in. 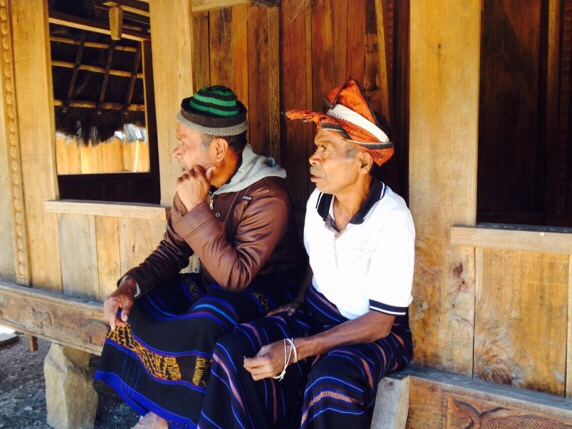 Over the next month other ceremonies would take place and families would slowly return.


One elderly lady beckoned us in to take a look inside her house and it was interesting to see the traditional open hearth fireplaces in the living area – three of them, one for each generation.

We chatted to the headman and his two daughters – one of them studying to be a teacher -and sang happy birthday to his wife who was turning 65 that day ! 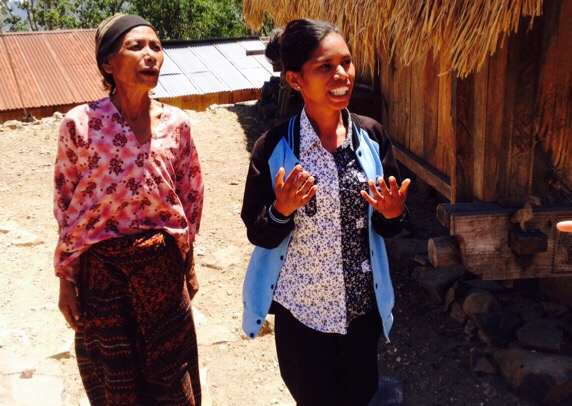 They made us coffee and gave us some cake that his daughter had made – strangely delicious.  Altogether a very interesting experience.

Our trip down the mountain was pretty spectacular, we enjoyed walking around the perimeter of a massive terraced paddy field where as well as rice, there were loads of different vegetables growing (no photos my phone ran out of charge!)

There were some hot springs in the middle of the plantation where a woman was washing clothes in beautiful hot water.

Another lovely late lunch at Koka Beach and we were back on the boat in the early evening for a long sleep!

7 thoughts on “Not merely Maumere”