You get to make some unusual discoveries when cruising. One of our recent and most interesting ones was at an isolated beach on an uninhabited island that we had visited previously, Koh Rok Noi (called Koh Rok Nok in the SE Asia Cruising Guide).

We had heard that there was an animist fisherman’s shrine on the beach but on two occasions we had searched for it and had no luck. We began to think that the shrine was just an urban myth.


I had just returned home to Bali Hai after six weeks in England for family reasons and we were heading back to Langkawi, Malaysia to renew our visas so we would have plenty of time left to run in Thailand while the visitors we were expecting were with us.
We also needed to stock up on our duty free wine and spirits – buying these in Langkawi saves a lot of money and there are many outlets (including a very good warehouse) where you can purchase really decent wine.
After we left Ao Chalong we had overnighted at Koh Phi Phi (oh so crowded with tourist boats) and then Koh Lanta (where we stayed for two nights because the weather was pretty bad).
Due to the weather conditions we didn’t go ashore at either place so it was a relief to be able to launch the dinghy when we arrived at Koh Rok Nai. 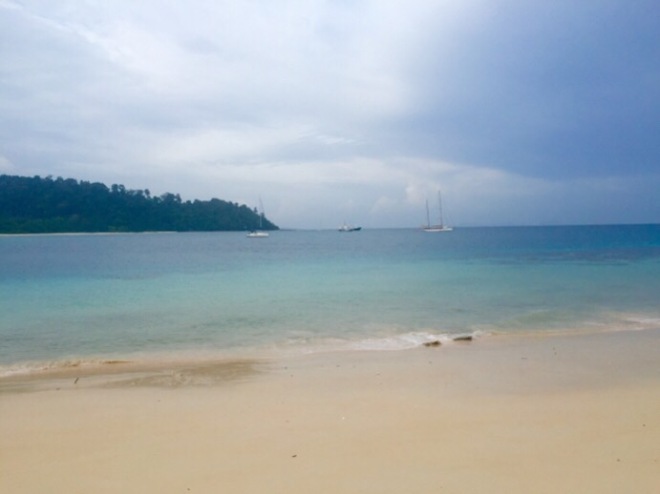 We relished the white sand beach, (Sarn Chao Bay which we have just learnt means Spirit House Bay), the gin clear water and being able to stretch our legs at last but most of all we were happy to have another crack at finding the shrine which apparently, was quite ancient and originally dedicated to the animist female fertility spirit Chao Mae Thaptim. It was supposedly built to protect fishermen from harm when out at sea.


The tide had gone out further than it had on our other visits so we were able to explore more of the beach. However, we still couldn’t see any sign of a shrine. Suddenly up amongst some trees we spotted a pole with small flags on it and at the foot of the pole, a couple of red blobs.
What a let down – is that all it is?
Then we went round to the other side of the rock and realised the red blobs were on the end of carvings that looked rather – well – phallic. Curiously there were a couple of new and unopened water bottles lying about – evidently offerings we thought.
We decided that we would investigate further so we climbed up a small cliff behind the promontory where the pole was situated to see if there was anything else to discover.
At first all we could see were trees and creepers but then – tucked amongst the bushes at the bottom of a fig tree – we spotted the most wonderful spirit house (a miniature copy of a house that most homes and businesses in Thailand have to give spirits their own place to stay, thereby keeping them away from the human’s home/work).
Inside the house were little carved “people” who looked like they were busy going about their lives.
The house was surrounded by more phalluses – above, below and in front of the spirit house. It really was quite extraordinary and a little confronting!


Then to add to my cultural confusion, right next to the spirit house, there was a tailor’s dummy with a really beautiful green dress held in place by a gorgeous silver belt. Echoes of the dress we found hanging in a deserted fisherman’s hut in Phang Na Bay. How bizarre. 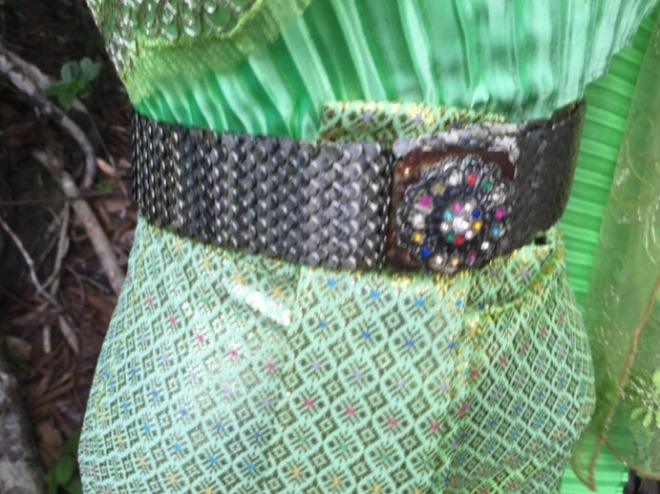 Feeling bemused but very thrilled to have discovered this well-hidden treasure we made our way back down the cliff.
As we climbed down the cliff we realised that the innocuous piece of driftwood that we had walked past was in fact an enormous phallus – the biggest of all that we had seen that day – probably too heavy to haul all the way up the cliff to the spirit house. 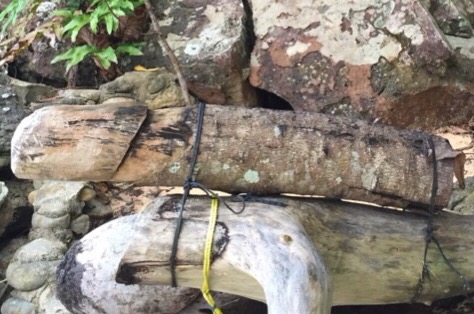 As we enjoyed our sun downers at sunset we drank to the fascinating culture of Thailand, and agreed that we couldn’t wait to discover some more hidden gems and find out a lot more about Thai beliefs  and superstitions.

6 thoughts on “The green dress and the enormous phallus”