We had anchored for the night outside Port Takola Marina in Krabi, on the Thai mainland, as we had arrived late in the afternoon on a falling tide. After a quiet night in the river near the marina entrance we took Bali Hai to Krabi Town to meet up with yachtie friends for lunch. Although the river gets very shallow, there is a well defined and well charted channel that took us to a great anchorage at the mouth of a tributary just opposite the town itself.

A short dinghy ride to a secure and well maintained floating jetty (close to the “floating” (on mud) restaurant) and we were just a few minutes away from May and Mark’s – a little cafe recommended by our mates from Charon who always pick out the best in eateries. There we met up with the Quintessas and their Tassie (Tasmanian) crew, Smart Choice’s skipper and his crew from Yantara and the Charons. Thirteen was quite a large number to accommodate in a small place but after one kind couple swapped tables and a bit of shuffling we made it.

Lunch was long and ranged over many topics. One of the remarkable facts about this gathering was that by coincidence the skipper of Charon had known the Tassie crew on Quintessa for more than 20 years – since their two sons were in primary school. It really is such a small world.

Fruit and veg shopping at the local market

After a quick shop at the fruit and vegetable market next door to the cafe we walked back to the dinghy dock. We really liked the atmosphere of Krabi and promised ourselves to come back and explore the place properly one day. It felt much more laid back than Phuket, less frenetic and less geared to full-on tourism.

We leisurely made our way back to Port Takola Marina, calling on the way to alert them to our arrival and to find out which side to put out our lines and fenders. As we approached the entrance a little dinghy popped out to lead us in.

Tying up was very easy thanks to Marina manager Sebastian – a “tres charmant” Frenchman – and his dock assistants. There were quite a number of boats arriving and only one (albeit very well built and appointed) dock available at the marina so far, but Sebastian had done a great job in planning and allocating suitable spots for all the boats of different shapes and sizes.

On the advice of Sebastian, we went to dinner that evening to a restaurant on the river – just a short walk away- called Ban Ko Lek. The restaurant was very full but we didn’t have to wait for too long to be served and the food was delicious. The only downside was the walk home – the walk itself was quite lovely, strolling through fields and listening to frogs calling but as we passed a group of houses a pack of dogs started barking and rushing at us which was quite frightening. We growled back at them which whipped them into a frenzy and some of them started howling and there was lots of growling around us in the pitch dark. Fortunately they didn’t follow us and the rest of the walk was uneventful. 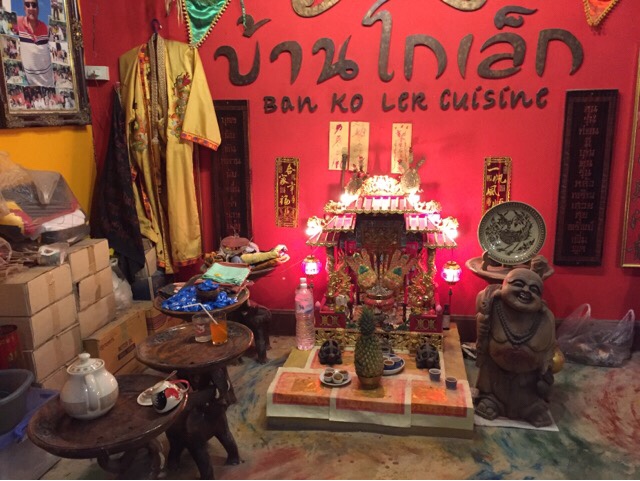 The shrine at the Ban Ko Lek restaurant

The following day was to be the Sail to Thailand welcome to Krabi party but this wasn’t just any ordinary party – we had been invited to the wedding celebration of Matthew Na Nagara, who with his father, is developing Port Takola Marina, and his beautiful bride Liu Sinut.

The official (and traditional) ceremony had already taken place but this was to be the big celebration party and boy it sure was big! 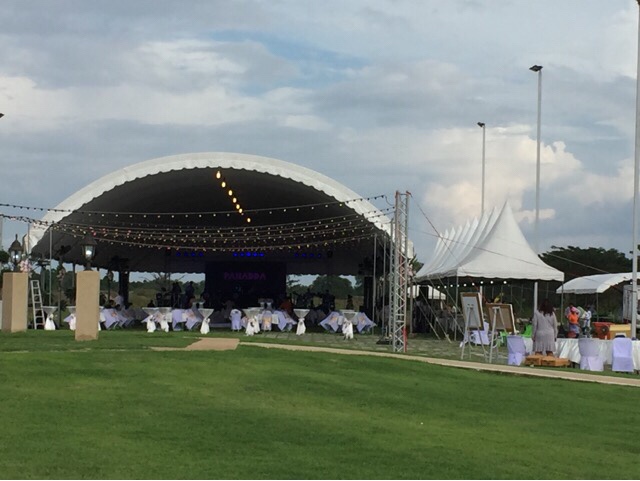 Before the festivities began two elephants were brought to a spot near to the massive open sided marquee (looked more like a permanent structure than anything). Elephants have a strange effect on people and even the toughest old salts enjoyed getting up close and stroking their curious crinkly hide.

We had a brilliant evening of celebration – professionally compered by Matthew’s brother Mark, a radio broadcaster, and former Miss Thailand and actor, Boom Panadda Wongphudee.

Posing with the bride and groom

We were entertained by The Royal Thai Naval Orchestra, Nadda Viyakarn, one of Thailand’s most famous singers, and later a another really great rock band with an amazing sax player . The food was fantastic- especially the banana roti for dessert, and of course the yachties were very happy to have beer and wine provided too.

Nadda Viyakarn, and the Royal Thailand Naval Orchestra entertained us in style 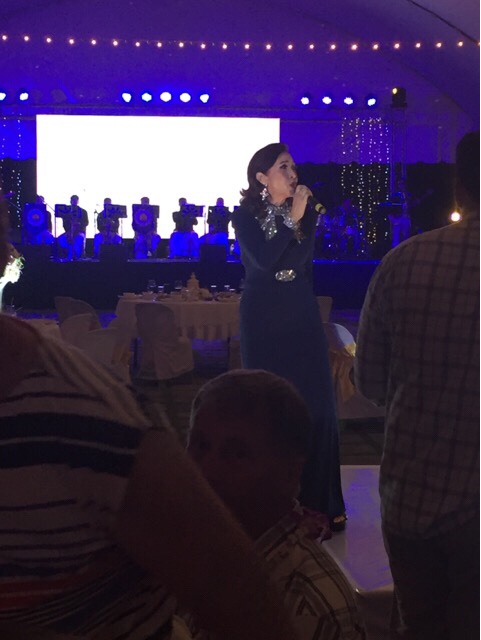 It was a very special night and for the stayers particular fun – dancing round the bride and groom to rock and pop music from throughout the decades.

Dancing round the bride and groom

Then they joined the circle

What a party! What a night! Thanks Matthew and Liu and Port Takola Marina for inviting us to such a magnificent night and for such a generous welcome. 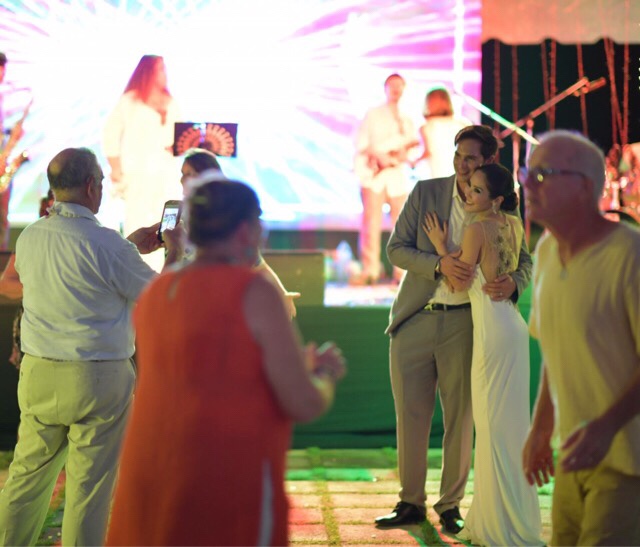 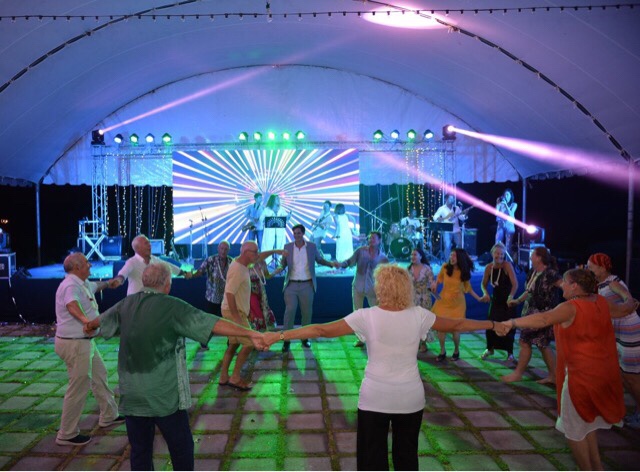 There was traditional entertainment too which was much enjoyed 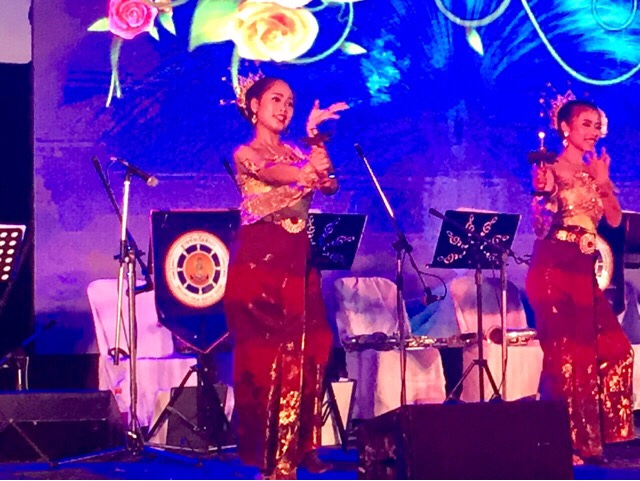 2 thoughts on “What a party What a night!”