It was peak holiday time when we took off in our camper van for the first time since collecting it from Veron in France and driving it to Pijnacker in the Netherlands.

We had decided to head North towards Scandinavia as we thought that countries like France, Spain and Italy would be heaving with people and perhaps Norway, Sweden and Denmark might be a little less crowded. We were also very interested in visiting these countries for all sorts of reasons including the rich Viking history, the wonderful scenery and interesting culture.

Although we did see scores of camper vans throughout Scandinavia except for the most remote places, we didn’t ever feel there were too many people on the road or have problems finding somewhere to stay for the night.

While staying with our daughter and partner in Pijnacker we had the luxury of purchasing, at our leisure, everything we needed – bedding, linen, towels, crockery, cutlery, utensils, pots and pans, food, drink, toiletries, cleaning implements and materials, storage boxes of every size and a couple of sturdy Dutch electric bikes. Now we were ready to set off.

As we had lived on a yacht in SE Asia for the past three years, we were used to being self sufficient and it felt good to be travelling once again with everything we needed, for every eventuality, (well almost) on board.

Our first stop was in a small town called Ostbevern in the German state of North Rhine-Westphalia. We had found the little overnight stop for motor homes on the ACSI (Auto Camper Service International) app that we had downloaded onto our iPad before setting off.

The pleasant little site in Ostbevern is administered by the staff in the local swimming pool/leisure centre and when we went in to register and get the key to turn on the electricity and to use the showers, the two girls on duty looked aghast when we asked if they spoke English. Despite their protestations one of the girls explained in perfectly good but simple sentences what we had to do when, where we would find water and clean the chemical toilet cassette and that we could use the pool for free. When she finished she shot her arms up in a “I made it “ gesture and we gave her a round of applause. She was so pleased. (Note to self: Face your fears!)

We had the site all to ourselves so spent a very pleasant and peaceful night- great value at 10 Euros a night.

The following morning we consulted the many brochures we were given by the girls at the leisure centre and used one of the maps that outlined some great cycle rides. 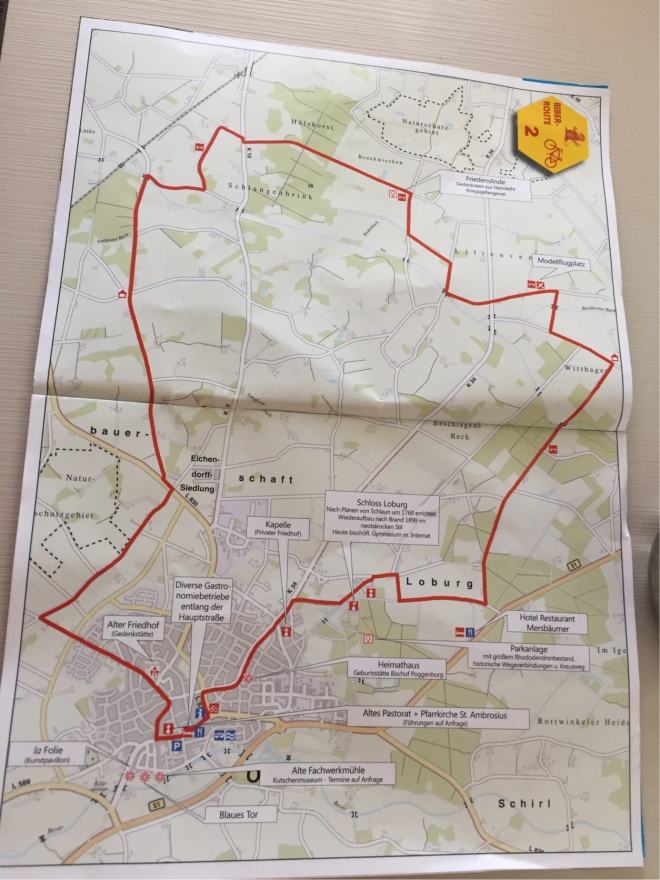 I was still feeling a little shaky on the electric bike as one of my hips needs replacing and is quite painful – especially getting started on the bike. Having said that, once I got going it was a brilliant way to travel and we had a great ride down leafy lanes and through fields of corn.

Even though I was quite nervous at first, it was fantastic to have an electric bike each and meant that we could see far more than if we were just walking everywhere. (Yes, it’s that “face your fears” thing again.) 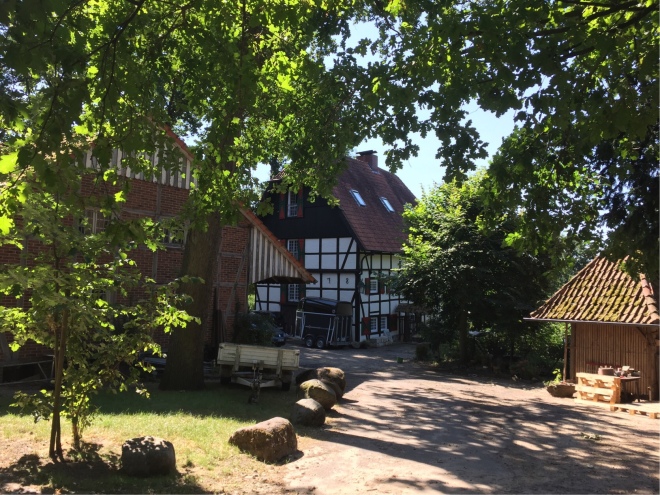 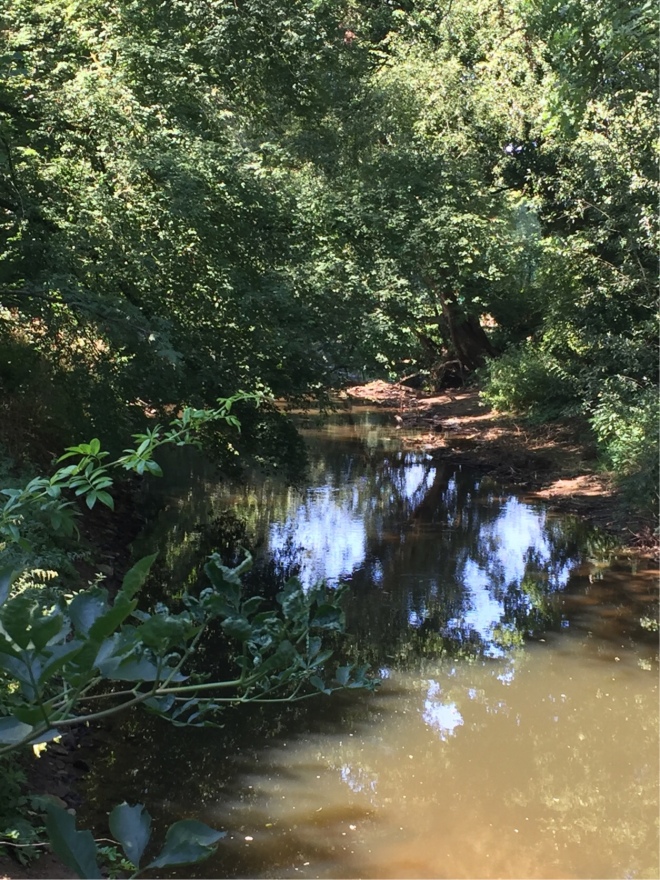 After lunch and filling up with fresh water we set off again and headed for a campsite in Winsen Luhe, the capital of the district of Harburg in Lower Saxony, Germany, 25 km Southeast of Hamburg.

On our way we went past the fabulous looking Iburg Castle (a former Benedictine Abbey which from around 1100 until 1673 was the seat of the Prince-Bishopric of Osnabrück).

The stop at Winsen Luhe was actually a car park in the centre of town which wasn’t exactly picturesque but was very close to a supermarket which was useful. As it was completely free and we had a very peaceful night it didn’t matter at all. 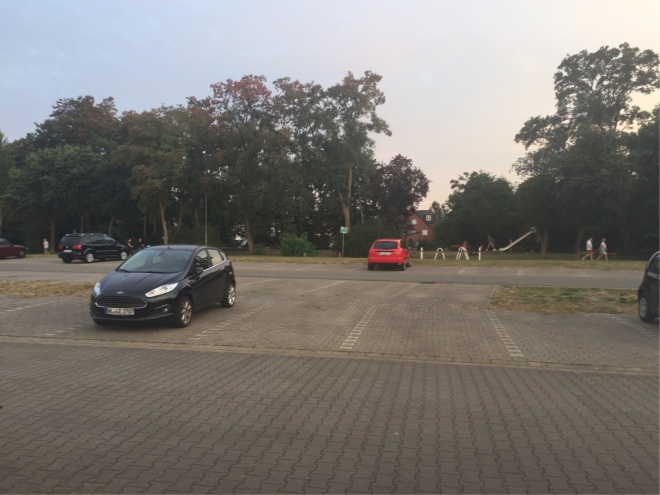 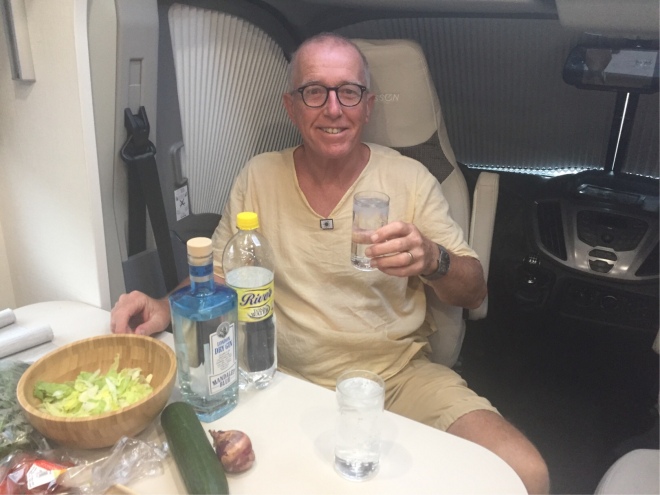 By day three we were beginning to get into a groove. The driving was much easier compared to when we picked up the van in France, mainly because we took the pretty country roads instead of the wild and fast autobahns. 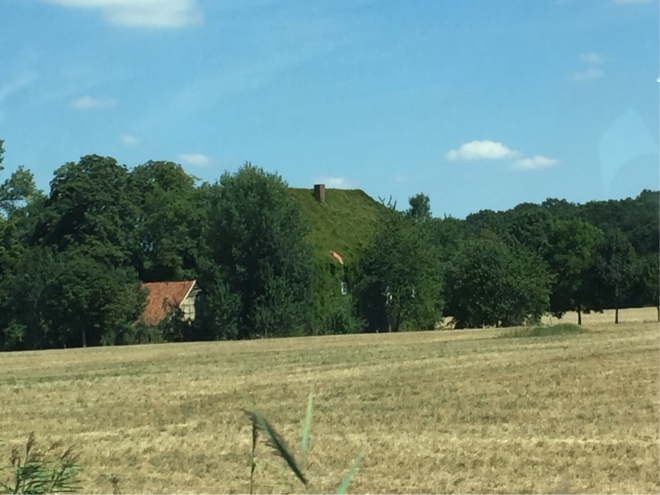 It was so interesting to see the change in architecture from the Netherlands to Germany and as we rolled leisurely past gorgeous dairy farms and fields of barley we agreed that even if it took longer, it was a much better way to travel as it was not only far less stressful but also we got to see much more of each country we were travelling in. (Another lesson learned: “Slow is good”.) 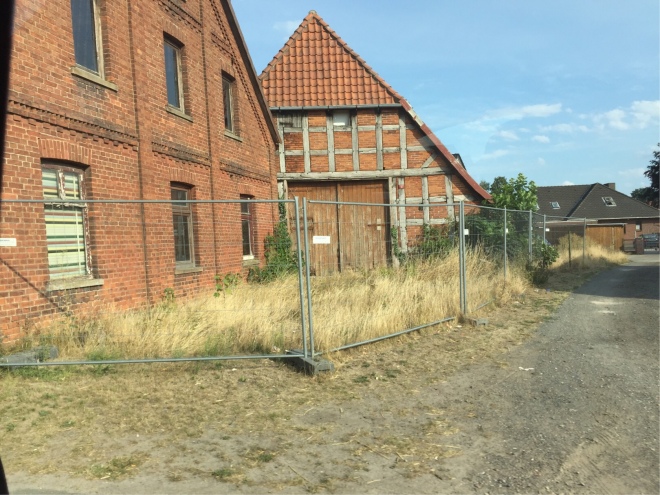 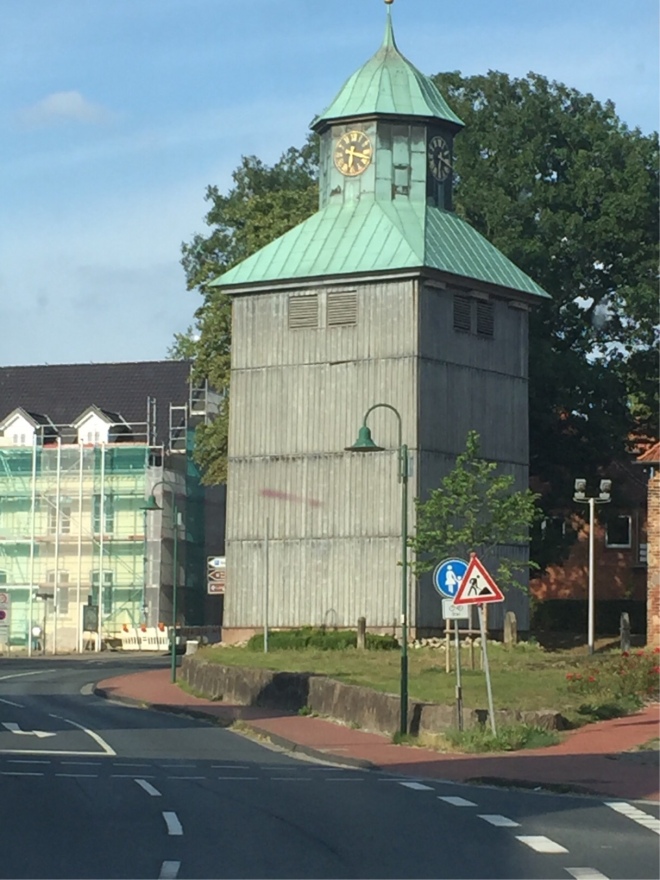 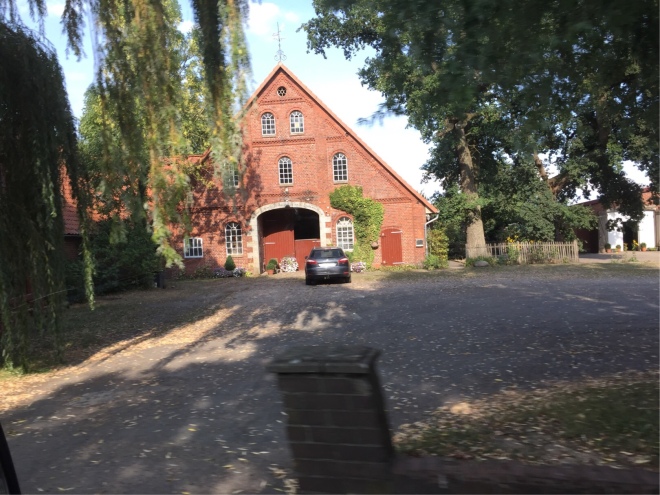 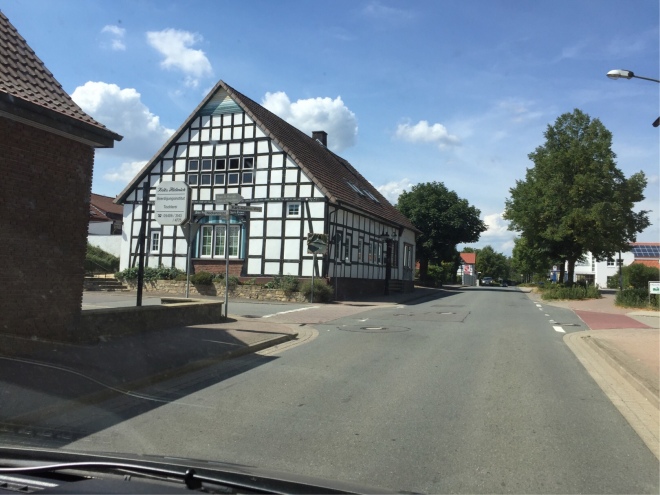