We farewelled the anchorage outside Yacht Haven and made for Ao Chalong, to check out of Thailand before taking a leisurely trip to Langkawi.

For once we had left loads of time to get to Malaysia so we could enjoy calling in to a few places en route and not have to keep to a tight schedule regardless of the weather or how we felt.

We had a great sail down the coast of Phuket – for a while that is. Then ahead we could see a huge storm and realised the winds were in actual fact bringing in a storm.

We broke the golden rule and didn’t reduce sail when we first thought of it. Our thinking was that the storm would probably only last ten or fifteen minutes tops. How wrong can you be? More than an hour later (by which time we had put a reef in the mainsail and shortened the headsail) it was still raining cats and dogs as we headed into Ao Chalong.  Nothing was broken but we will take more care next time.  Fortunately it cleared up just as we came into anchor.

We cleared Customs and Immigration with the minimum of fuss, despite the fact that we had flown in from Australia and were now departing by boat.
After the debacle that occurred  previously, when we entered by boat and tried to leave by air, and were prevented from leaving the country until we had provided a bond, we were anxious to do everything that enabled a smooth exit.
We had been advised by the main Immigration office in Phuket town that an alternative to leaving a bond of 20,000 Thai Baht each was to pay a one-off non refundable payment of one thousand Thai Bhat for the skipper and each crew member. Important this does not apply to passengers so always list anyone other than the skipper as a passenger.

The Immigration officer asked for two thousand baht but we said no, I was listed as a passenger and we had been told at Immigration in Phuket town that passengers don’t need to pay. He accepted this straight away with no argument.

We felt quite relieved once we had left the building at the end of the 800 metre pier where the Harbour Master, Immigration and Customs offices are situated.

The next day we headed off to Koh Phi Phi Don in the smoothest conditions, no wind but lovely sunshine.

We anchored at Loh Moh Dee Beach on Koh Phi Phi Don and as it was still light we went ashore to take a look.  All the tourist boats had left for the day so we were able to stroll along the beach and through the village with only a lonesome stallion and a few locals for company.  It was a very pretty location with beautiful clear water and loads of colourful tropical fish swimming on the reef.

We toiled up the hill behind the beach and crossed over the saddle of land, wandering into a resort with cottages perched precariously on the steep hillside.  At the bottom there was an excellent restaurant on the beach – a great spot for a few beers, a meal and to watch the sun go down. 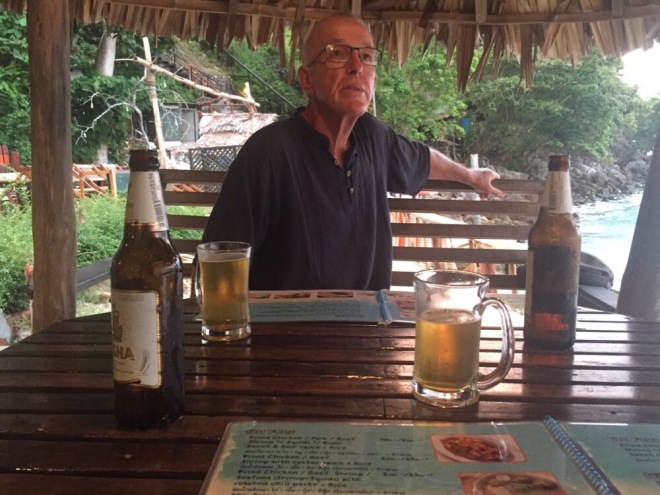