Suddenly we had come to end of our first boat guest of the year’s two week stay. Our circumnavigation of Langkawi completed we anchored once again in Telaga Harbour.

We went for one last delicious (guest’s favourite) tuna steak ashore at Tapaz in Perdana Quay, went shopping at “Trillion” shopping centre for gifts for the Capt’n’s brother to take back to England and then it was time to say a sad farewell.


Unfortunately we couldn’t leave Langkawi for Thailand (and then on to the Andaman Islands) straight away as we had to wait for a new motor (plus a spare smaller “free” one, thank you Stella Marine) for our water maker to arrive from Australia.  In the meantime, the old one that had been mended and reconditioned and then had broken down again came back from the engineers and was working fine! It’s always good to have back up particularly with something as essential as the water maker! The delay in leaving fortunately meant we had time to catch up with Richard and Marilyn from Charon at a restaurant called Mangos – a real piece of Australia in Langkawi! 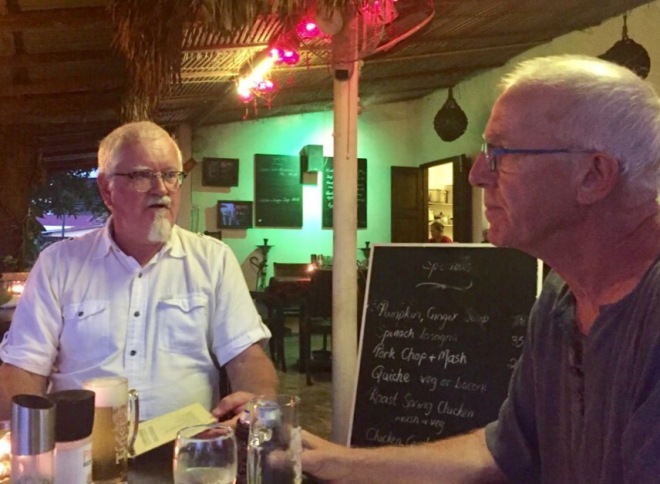 We were also delighted to meet up with Meryon (crew) and Dave (skipper) from Alexes who had just arrived in Langkawi from Pangkor. The last time we had seen Meryon was in England in April 2016 and we hadn’t seen Dave since the Sail to Malaysia Rally at the end of 2015 so it was a lovely reunion. They were busy preparing to sail back to Europe and their progress can be followed on Meryon’s blog https://navitasveretis.wordpress.com.&nbsp;

Finally on 8 February we set sail for Thailand. Our first leg was just a short hop to Koh Tarutoa whose southern coast lies only four miles from Langkawi. However, our trip was a little further than that we travelled right up to the northeastern part of this unspoilt 152 square kilometre island.
The bay we anchored in was stunning and we were the only ones there – or so we thought!

Fortunately we didn’t jump off the boat for a skinny dip as we had the previous time we anchored there, as we discovered we were definitely not alone!

As we zoomed around the beautiful calm waters we met two Thai ladies collecting shell fish from the rocks of a small craggy island that protected our anchorage. Then we landed on one of the beaches on Koh Tarutao and to our amazement discovered a fisherman in a cave reading the newspaper!! He was resting on a wooden day bed sheltering from the sun, totally hidden from view until we landed on the beach.
The next remarkable thing we noticed was a whole network of caves that extended across almost the whole of the cove. Sadly I didn’t have anything to take photos with – the first in ages that I had left my camera behind!
The resting fisherman indicated that we could go into the cave system – the formation was like walking along a passageway which opened out to an open “room” and then narrowed again into a passageway. There were at least half a dozen “rooms” where we found rough hewn beds, tables and benches, pots and plates, bowls and water carriers. There was even an outdoor European style toilet complete with privacy screen!
The floor of the cave network was packed hard from the feet of the hundreds of fishermen who had used this as a resting place and probably a refuge from storms, maybe over hundreds of years. We found a couple of massive middens comprising shells from many a fisherman’s meal. Fascinating stuff.
Finding this place which potentially could have housed scores of fishermen was a good lesson – don’t assume that just because you can’t see anyone doesn’t mean that people can’t see you! I for one, was very glad that I hadn’t leapt naked into the sea in front of our shellfish gatherers and the resting fisherman! So fellow sailors, just remember – look before you leap!