After about a four hour motor on an uncannily calm sea, we arrived in Elphinstone Harbour at the head of the Homfray Strait which is, according to our cruising guide, “a unique experience, the waterway dwarfed by towering trees on either bank”.   As we meandered our way up the passage we could see tall trees further inland, but the banks were mostly covered in mangroves with hardly a tall tree to be seen.
The only explanation we could think of was that the 2008 Tsunami must have inundated this area and left it devastated.
Because the Homfray Strait has some shallow areas and also power lines that could have restricted some of our yachts due to mast height – and also just because it was a fun thing to do – we were all invited to cruise down the Strait on the good ship Quintessa. So after anchoring in Elphinstone Strait and a quick lunch we all hopped aboard. 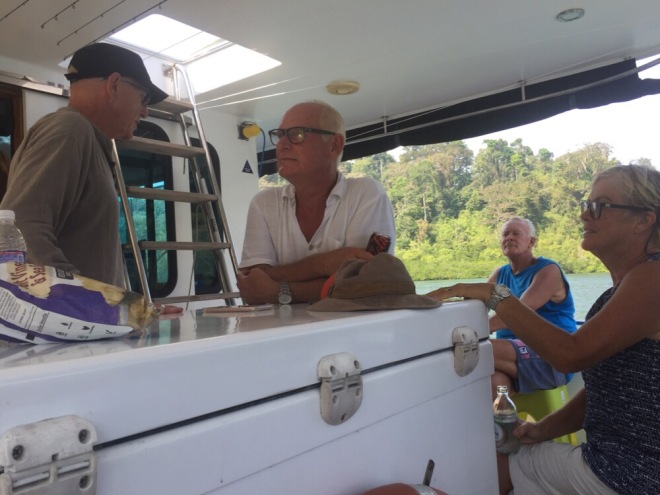 We had a lovely afternoon but didn’t catch sight of any of the promised large and numerous saltwater crocodiles. We did see a few boats and went past a couple of jetties where ferries ply the passage between islands to link the main trunk road that traverses the Andaman island group.

On our return journey we were stopped by a police boat with four officials (not in uniform) aboard. They boarded Quintessa and after checking our course and the credentials of our Captain and taking some photos, left us to return to our anchored boats. They informed us that because the Strait runs close to a protected tribal area, we weren’t allowed to enter it. Fortunately, there were no repercussions for having done so! But the Cruising Guide was right – it was a unique experience.  We arrived back at Elphinstone Harbour and decided to stay the night as it was such a calm and picturesque anchorage. We had Sundowners on Quintessa and some delicious Sashsumi prepared from another beautiful tuna caught by the skipper of Beach House.  Unbeknownst to the crew of Smart Choice,  House had kept a piece of the fishing net that the Smarties had become snarled up in – way back on the first leg of the Sail2Indonesia rally.  The right piece of driftwood to display the net had been found recently and the momento was ceremoniously presented with much hilarity in memory of this hair raising event.

Another highlight of the afternoon was perpetrated by the mischievous sister of Quintessa’s skipper. She told us to all freeze when she said the word “police” (a Mannequin Challenge). This we did very effectively and to Andy’s obvious mystification but he dealt with it very gamely!

​​
And so ended another great day in the Andaman Islands.

If you enjoyed reading this blog about our experiences in the Andaman Islands go to:

Or read my previous update at:

4 thoughts on “Straight down the strait and boarded by Police”