Our final island visit during a month in the Andamans was to the glorious Cinque group, possibly the most beautiful of all the places we had visited in this glorious part of India.

These islands have been designated a National Park area and there is an entry fee of 500 rupees per person (roughly Aus $10 or £6) and 1 500 rupees per yacht each day. Our first anchorage was on South Cinque Island where there was a mile-long beach of fine white sand, sand dunes backed with coconut and Pandanus palms and at one end cliffs and rocks.  Entry on to the beach was a little of a challenge as there was a bit of surf but we all managed without too many dramas.  We had a wander along the beach, looking at the footprints of many different birds, crabs and a very large monitor lizard. The water was crystal clear and we enjoyed a lovely long swim before returning to our boats to prepare for a curry night on Bali Hai.  There was a bit of a swell so between that and the annoying itch of sandfly bites (despite applying repellent!) some of us didn’t have a great sleep that night.  The following day we travelled four miles to a lovely and calm anchorage on North Cinque Island.

We anchored in the clearest water you can imagine and could see our anchor chain stretching out under the water for the longest way. There was a lot of coral in this bay so we anchored well out. Sadly much of the coral was dead but we saw a number of spots where it appeared to be growing back and the good news was there were lots of pretty fish to look at.

We had a lovely tramp through the wooded area where the birds were singing their hearts out. There was obviously some attempt to keep the area clean but we were shocked and distressed to see how many plastic water bottles and other objects were in piles around the place, obviously washed up from who knows where.   We noticed one positive thing – there were no plastic bags. The Andamans have done a sterling job of banning plastic bags. At the market and the shops, if you don’t have a shopping bag, you are given your purchases in a strong woven Tyvek-like fabric bag.  While it’s great that so many people now have access to clean drinking water we (that’s all of us!) have got to think of some other way of transporting and distributing it other than one use plastic bottles. 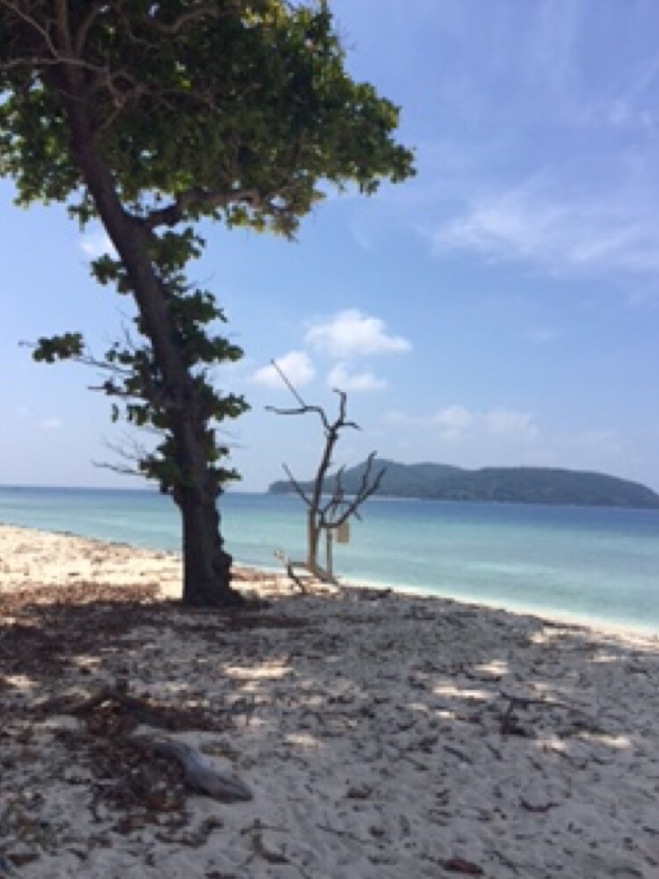 We tried to make our way by foot across the short distance to the anchorage on the other side of the island, spotting on the way, signs of deer – tracks, scats and leaves nibbled to a certain height – but after a while the undergrowth became too dense so we turned back and walked back along the beach.

On the shoreline we were intrigued by the curious shapes the bedrock had taken on, worn down over the millenia by competing currents and winds. 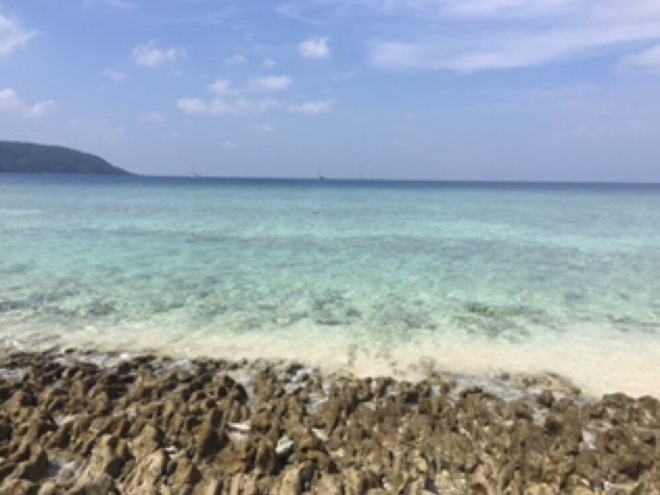 We had a long cooling dip in the impossibly clear turquoise water and then hopped in our dinghies to travel round to the other side of the island.

We took our dighies between south and north Cinque islands to visit the beach described in the pilot as “probably one of the most spectacular anchorages in the Andaman Islands…..this anchorage has fantastically clear water and the most perfect white sand spit ashore”.


Between the two islands is an extensive coral reef a lot of which sadly looked bleached but we did see splashes of colour here and there which made us hopeful that the coral would recover.
As we turned around the headland we saw an entrancing spit of white sand with a brilliant blue strip of sea beyond and bright aquamarine, sparking clear water between us and the sand. Dolphins and stingrays are purported to live there but they were lying low that day. Once on  the beach we noticed a large rubber dinghy on the opposite shore quite a long way from where we landed. The island widened out at that point with clumps of trees bent by the southwest winds but tall enough to provide good shade for a smart looking structure reminiscent of a wedding marquee but much smaller.

As we clambered out of our dinghies we noticed a couple of guys walking towards us and as we strolled up the beach they approached us, explained they were from the Forestry Department and one of them asked us for our permits for the Cinque Islands.
Now we had applied for our permits when we were in Port Blair and handed in our itinerary but they weren’t ready for us when we left for our trip south. Our agent Rathnam said it would not be a problem as by the time we had arrived at the Cinque Islands the permits would have come through and we could just quote the number.

The problem was that as we didn’t have any phone coverage (the Internet and telephone connectivity is woeful in the Andamans) we weren’t able to contact Rathnam to obtain the number of our permits.
We explained the situation and the forestry guy’s response was “I have to see your permits, you are not allowed in the Cinque Islands unless I can see your permits,”. So we explained again, that we had applied and paid for the permits but the Forestry Department was too slow and we had to leave without them. “I have to see your permits, you are not allowed to be in the Cinque Islands, unless you show me your permits,” he responded.
Things were beginning to get heated and all of us felt exasperated. I suggested that he called our agent Rathnam at Andaman Holidays. He said he didn’t have a phone. We hadn’t any coverage at the beach we had been on earlier but when I checked it again I noticed that there was a little coverage on this side of the island.
Thankfully we got through and Rathnam was able to explain again on our behalf. Excellent, we thought as we watched our friend from the Forestry write numbers (presumably of our permits) in the sand.
“So all Ok?” we asked. “Actually, you are not allowed on the Cinque Islands without a permit and you have to show your permits before I can allow you to stay……”
We all groaned inwardly and just ended up walking away saying our “goodbyes” and “thank you” between clenched teeth.
Rathnam called me back to say everything was fine and that the Forestry guy was a bit anxious because there were VIP guests staying on the island. They must have been the chaps Smart Choice had seen fishing illegally round the other side of the headland!

We jumped into the cool gin-clear water to cool off (literally and metaphorically). It was glorious and we must have stayed there for the best part of an hour, swimming and chatting. The Yantaras decided to go back to prepare for a late lunch BBQ on their boat and just after they left three figures arrived – all in their underpants- who turned out to be the Forestry VIPs (probably the ones who didn’t get round to signing our permits!). They had caught some fish (surprise, surprise we were in a national park where marine life is meant to be protected!). They were friendly but we were in no mood to spend time with our Forestry friends after the permit hoo ha and politely declined their invitation to eat the fish they had caught with them. Later on we had a very enjoyable BBQ on Yantara – sadly our last out in the islands before returning to Port Blair.
It had been an amazing experience but we were looking forward to going back to Port Blair with its culture, its historical sites and the busyness of a small Indian town with cows and goats wandering the streets, the markets and of course, the ﻿restaurants.

If you would like to read more about our visit to India’s Andaman Islands go to:

2 thoughts on “Final island visit – saving the best for last”