It was our last night in the deserted and magnificent Tambelan Islands and we cooked a delicious meal of barbecued fresh fish purchased from a lone fisherman who had visited us in our isolated anchorage at Pulau Benoa.

Honestly, we could have stayed there for weeks but had to push on as we were going to meet our daughter who was arriving from India shortly before the Sail to Wonderful West Kalimantan rally began.

After a short doze in the cockpit Yantara and Bali Hai pulled our anchors up at 11 pm so we could arrive in Sambas, West Kalimantan, on a rising tide.

This was a first for us – normally when we do overnight trips we sail in the day first so we ease into the night watch. This time we headed straight out in the darkness of the night. There had been a sliver of a moon earlier but now there was nothing except thousands of twinkling, winking stars.
The deck light was a great help in pulling up the anchor in the pitch dark and soon we were on our way – gliding past Islands all around with not one light showing.
We made excellent time as the tide was going out and we sped through the islands like a cork out of a bottle!

The night seemed short and in the end we did a joint watch and neither of us went to bed for a sleep. Dawn was a grand affair with amazing cloud formations to welcome in a new day.

Just before midday we saw the first sight of Borneo. We had crossed the South China Sea! Another first to cross off the list.

At 1 pm we found our first channel marker and commenced the long journey inland up the Sambas River to our anchorage outside the Harbour Master’s office.

The entry was quite fraught as the river mouth is very silted up and we feared that we might go aground.

However, we passed between the first set of port and starboard leads and then lined up the triangular leads correctly (when you are on the correct course they appear to be balancing one directly on top of the other – looks a bit like an egg timer).

We motored passed a stationary tug and barge at one point – we think they were waiting for high tide to make their way out of the shallow river mouth.
The river was incredibly muddy and a deep brown – no making water here! 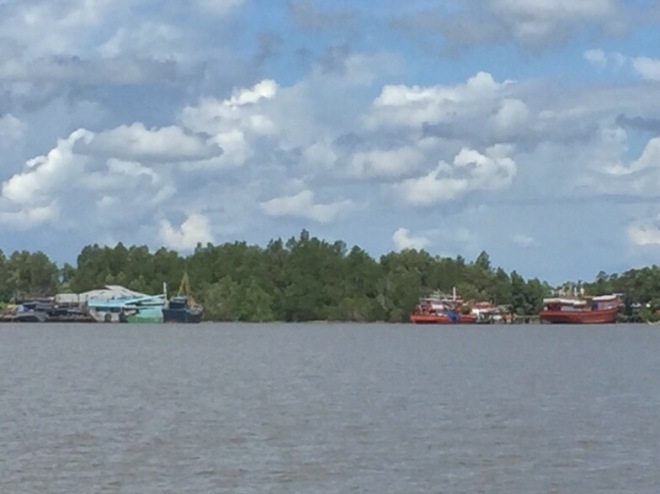 An hour later we were still going, having passed the town of Sambas (we later learned) and arrived at the anchorage where there were all sorts of fishing devices and traps in the water.

S/V Matilda, another Australian boat was already anchored but the crew warned us not to go in behind them because of the mass of fish traps which looked like random sticks poking out of the water surface.
We decided to anchor the other side of the large boat dock near some mangroves (apparently inhabited by crocodiles) and once we were comfortably settled decided to go ashore to check in with the Harbour Master. 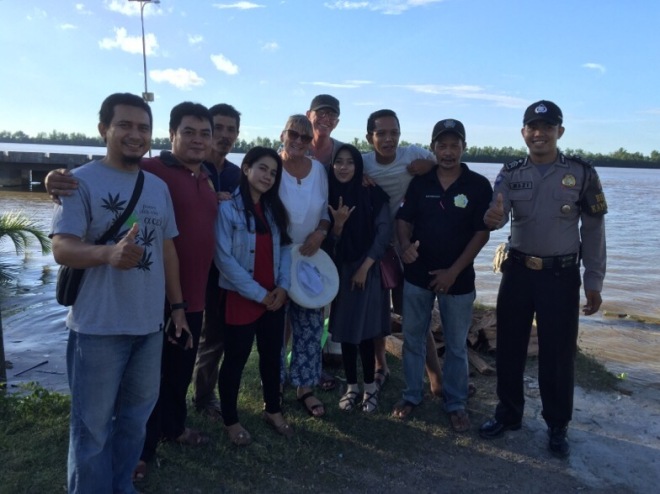 We were almost mobbed when we took our dinghy in and there was much taking of photos, snapping selfies etc.

Muriman, the very charming Harbour Master was expecting us the following day or the day after and was apologetic that he wasn’t in his dress uniform! He was so helpful – organising a car and driver for our trip to Pontianak to pick up our daughter, providing his own car to take us to the market and even taking us out to a lovely Chinese restaurant built over the water in a location we would never have found by ourselves. 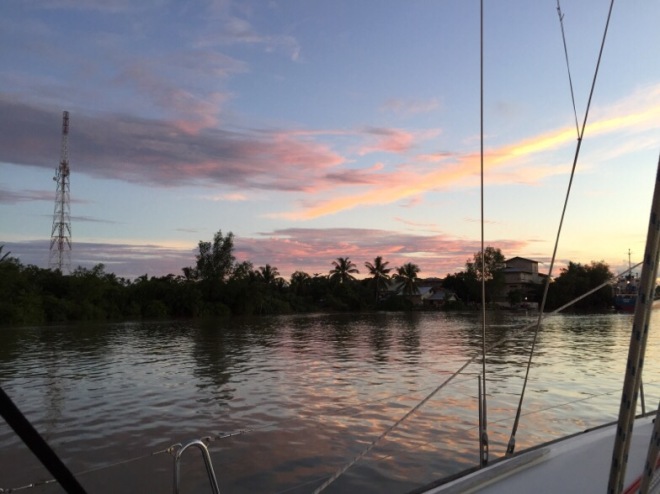 The day was made complete by a beautiful sunset. It was a wonderful start to our Borneo adventure.