Bali Hai's gearbox had busted and we were stuck at anchor in Tangung Bajau, a little bay near Singkawan on the island of Borneo in Indonesia.

We had two choices – try and repair the gearbox or install a new one. We called our diesel mechanic and Yanmar engine agent in Brisbane who advised against trying to repair as it was a sophisticated unit with high tech cone-shaped gears. Also, if we tried to repair it, its removal would result in us only having the solar panels and wind generator for power and our fridge and freezer would probably not keep going. With both of them full to the brim with food (we were expecting boat visitors imminently) that was not a good option.

The boat that had towed us into too shallow water returned

As we were pondering our next move the fishing boat that had towed Bali Hai onto a mudbank the previous day came back to see if there was anything they could do to help. They had brought with them a young man who had lived in Australia for some time and had perfect English. He gave us his phone number and said if we needed any help of any kind to give him a call. It was an amazing asset to have someone local who could speak such good English.

After our visitors had left we called Yanmar gearbox agents around the region. Did they have one in stock for our boat? We drew a blank. But wait! The Singapore agents came back to us and said that they had sourced one in Japan! However, there was a catch – it was still being finished off in the factory. It was being painted which would take NINE DAYS! Then it would have to have it sent to Singapore and from there to Indonesia. Goodness how long that would taken given that customs in Indonesia have a bit of a reputation for dragging their feet. Optimistically it would have taken a month to six weeks to arrive which we felt was just far too long.

We did have a third option up our sleeve though. We had the used gearbox which the current broken one had replaced. There was nothing wrong with it that we knew of and it was all wrapped up and stored under our son's house in Brisbane! We also had our daughter staying on the boat with us who was not only willing and able to fly to Brisbane but happy to do so. She hadn't been back for over a year and a half do she was delighted to have the chance to have a quick catch up with her brother and partner and also see some her friends.

After a torrid day trying to get a reasonably cheap flight which wasn't too lengthy or difficult and then attempting to pay for it with the Internet dropping in and out and our bank not allowing the payments to go through, it was eventually organised (after a couple of long and anxious calls to our bank!).

Our next task was to book a car to pick her up the next morning and take her to Pontianak to catch the flight to Jakarta. We phoned Iwan, our guide from the rally for the Bengkawang/Singkawan leg, who was a huge help to us and assured us a car would be waiting the next morning.

I decided to go with her to Pontianak to keep her company but also to make the payment for the Jakarta-Brisbane flight at the airline office. Somehow I had managed to book her a seat but hadn't actually paid for it as the Internet had dropped out and according to the airline's customer support I was unable to make a phone payment the day before the flight. 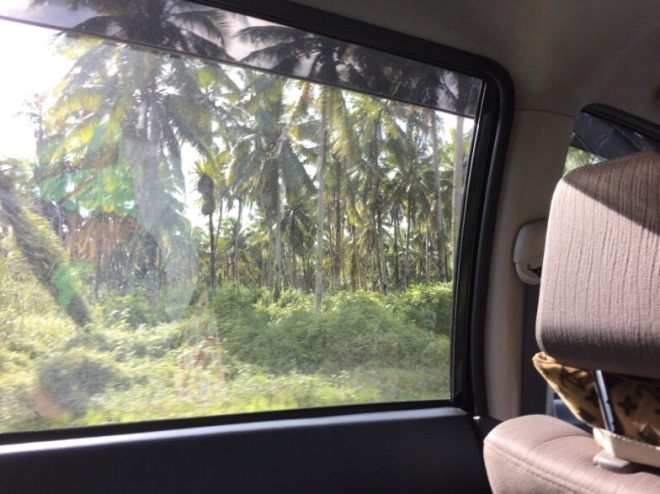 View from the car on the way to Pontianak

The next day we were at the beach very early in the morning and were surprised and delighted to see Iwan there in the flesh. He had left Pontianak in the early hours with the driver so he could give us assistance with tickets etc.

Iwan who came all the way from Pontianak to accompany us

Unfortunately the airline offices had no facility to process our payment which at the time was irritating but ended up being an excellent stroke of luck. The flight to Jakarta was a couple of hours late in leaving which meant by the time our daughter arrived and located the airline desk the connecting flight was boarding – in another terminal!

So we cancelled the flight and I quickly went online and booked her on another flight going via Singapore. It was a little bit tense to say the least but she was on her way to collect the gearbox!

One thought on “Repair or replace? Gearbox saga continues”