We were on Pulau Genting, a small and quite isolated island off the coast of Borneo – at the mercy of the weather again. We had hoped to get to Ketapang in time for the final events of the Wonderful West Kalimantan rally but a 20 knot plus wind straight on the nose and a big swell meant that we just wouldn’t be able to make it safely.

We were especially conscious of our (and especially the boat’s) safety having just replaced our broken gearbox with a pre-used one.
So there was nothing for it but to turn back to the island where we had anchored the previous night.

We had gone ashore on our return to meet some of the local inhabitants and had been fortunate enough to have been shown around by one of the teachers and a government administrator who was on rotation at Pulau Genting.

Before we went back to our boats for lunch our two friendly guides offered to take us for a walk across the island that afternoon. There were some good views they said but it was quite a steep climb in parts.

We returned from our boats around 3 pm and first walked passed some small homes with hand built canoes stacked at the side. The householders came to say hello as we walked by.

After walking over a rickety bridge we joined a narrow concrete road – apparently built by the army to enable children from other parts of the island to get to school. And what a road it was! Yes,  it was extremely steep in places but at the top of every rise there was the most amazing view. 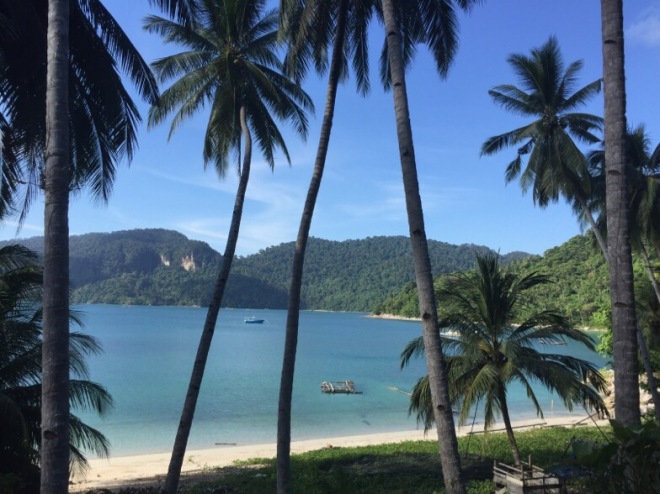 Eventually we came to a small hamlet and turning away from the sea, came upon a long and steep set of steps.

As we climbed we were impressed with how green and lush our surroundings were and as we staggered up the last steps could see in the profusion of greenery many crop producing plants including coffee, coconuts, peppercorns, bananas, mangoes and various other fruits.

To our eyes the planting looked random but there was probably more method to the planting than was first evident.

Following a narrow path back towards the coast we came upon another smart looking village with its own health centre, school and small stores selling snack foods, drinks, sweets, eggs and a few other things including garlic which we had just run out of. 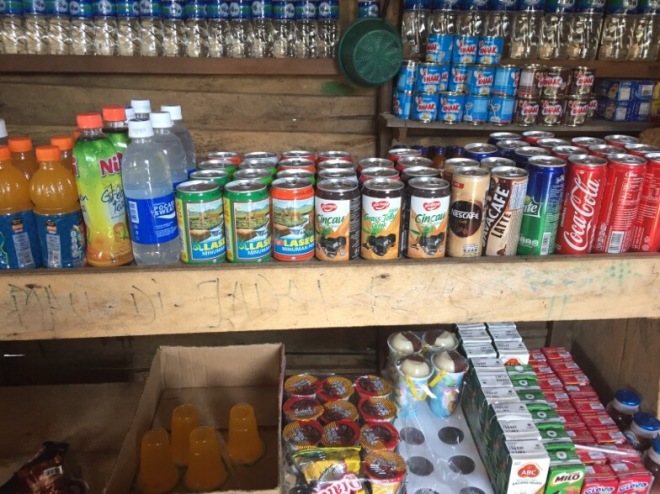 We ended up on a jetty where a group of fishermen were manoeuvring their boat into position, someone else was laying out fish to dry and the children were playing chasing games.

Lots of people came to say hello to us, including the headmaster of the local school and of course many photos were taken. 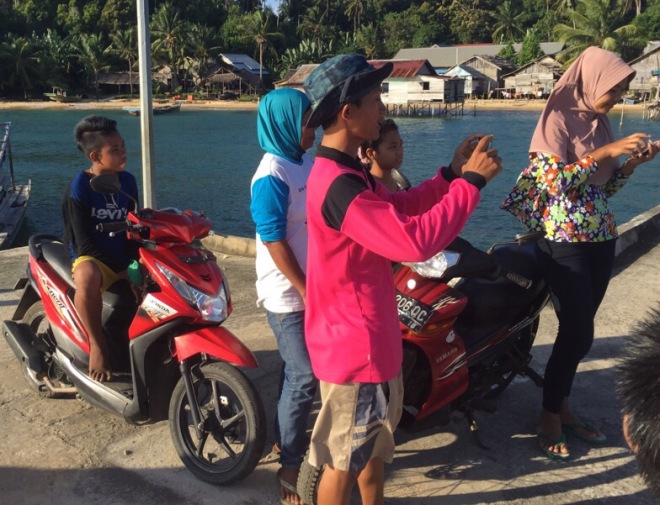 We followed the track around the coast until we rejoined our original route near the flight of steps.