Heading towards Pulau Gelasa after leaving Belitung got me thinking about the famous Belitung shipwreck, an Arabian dhow, that sank in the Gelasa Strait around 830CE. What happened? Did everyone drown? What went through the mind of the Captain as the ship went down with all that treasure aboard?

No one even knows why the ship was so far from its expected route back from China. Were they lost? Were they chased off course by pirates? Was there a mutiny? Whatever the reason, the decision was a bad one as the dhow sank without trace and with it went the biggest single collection of Tang Dynasty artefacts ever found in one location as well as many other treasures.  We had revisited the small museum in Tanjang Pandan before leaving Belitung as the first time we went in 2015 we had been intrigued by the small collection of treasures from the wreck (apart from these few items, the entire collection of recovered items is now on display at the Asian Civilisations Museum in Singapore.)

The museum also has exhibits on tin mining and some items from the period of Dutch rule and there is a small zoo in the gardens at the back of the museum. The animals are mostly kept in dreary and woeful conditions so give it a miss if you are an animal lover.


We had a good sail under headsail only, in 15 knots of wind to Gelasa island where we stayed for one night. Gelasa is a very green, lush, island with clear water and lovely coral.

After a rolly night we left just before 7am and had a rollicking good sail with twenty knots of wind and a big ocean swell. Heading for a bay on the east side of Pulau Banka we realised there would be too much swell there so we decided to keep going to the island’s northern anchorage despite the fact that darkness was falling.  As Yantara had anchored there in 2015 we had their track to follow so it was actually no problem coming into the anchorage at night. 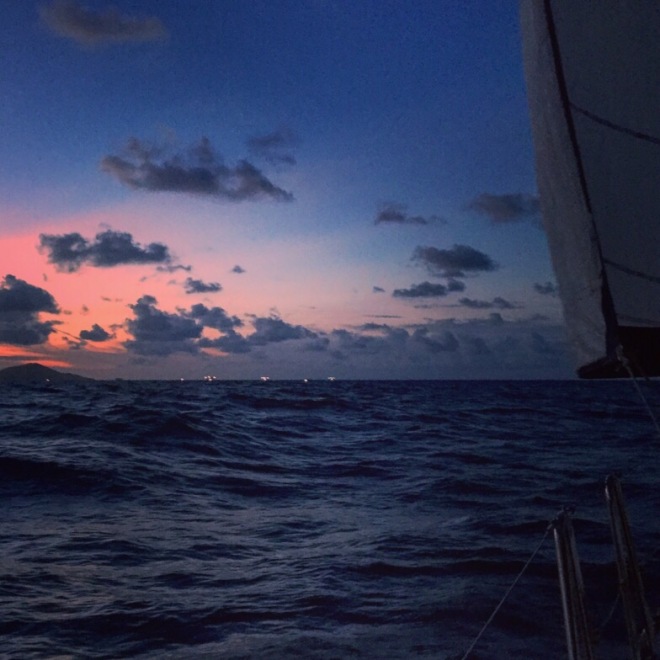 At 10.30pm Bali Hai achieved a small milestone (well for us it felt quite big) – we clocked up 10,000 nautical miles since we left Brisbane in 2015. I think we both experienced a feeling of accomplishment as we made our way in the dark to our anchorage.
We spent two nights at Banka and the day after we arrived went for a long walk along the white sand beach. There were some lovely shells to collect but the water wasn’t very inviting as it was stirred up and discoloured – probably from open cast mining activity a little way back from the beach.
Our next destination was Pulau Pekacang and we had a really excellent sail there in 13 – 15 knots of wind. It was amazing to be sailing again after the incessant motoring we had become used to.
Pulau Pekacang is one of those gorgeous deserted islands (except for one fisherman’s hut) that you feel you have to revisit one day and spend more time there. During the night a half moon shone on the white sand beach – the sand was glowing a beaming white in the moonlight.

When we woke up in the morning everything smelled fresh and fragrant after the rain the previous evening. All we could hear were birds singing, cicadas chirping and the occasional monkey call.
We were pulling our anchor up when we heard from Yantara that they were having to pull up their anchor manually. The temporary repair to the anchor winch made in Singkawan had finally given up the ghost. While Captain Yantara hauled the anchor and chain using winches on the deck Bali Hai stood by in case assistance was required.


After the lovely sails we had been enjoying it was disappointing that there was no wind to blow us to Pulau Saya, 40 nautical miles away.
After motoring all day we were ready to shoot the anchor down quickly and relax with a DOA (drink on arrival) but that was not to be. We headed for the anchorage we had agreed on with Yantara but as we approached we were a little concerned about how quickly the reef came up when we moved from the water too deep to anchor in. Anchoring in deep water would have been much more than a nuisance because of Yantara’s anchor winch being out of action.

We went to have a look at an anchorage that had been recommended by one of our fellow rally participants- they had anchored there in 2015. As we suspected, it wasn’t suitable for the North West monsoon season so we continued to circumnavigate this small island looking for a sheltered spot elsewhere. In the end we dropped our anchors where had first thought of.

Before 7am Captain Birdseye was over on Yantara giving a helping hand to haul the anchor up. Then it was our turn and somehow we managed to bring up two anchors instead of one! Along with the anchor was a lovely assortment of twine, fishing net and assorted rubbish.

We were eventually able to cut ourselves free and set sail for Penuba to visit our friend Werner, who we had met on the 2015 Sail to Wonderful Indonesia Rally and who was now married and permanently based on nearby Pulau Singkep.