Meeting up with old friends is always great and when it comes as a surprise it’s even better. When we reached Puteri Marina – our first stop back  in Malaysia – we discovered to our delight that our buddies from the 2015 Indonesian rally, James and Cindy from YouYou, were in town.


We had a lovely reunion at New Zealand Unlimited, a restaurant overlooking Puteri Marina. It’s probably not somewhere yachties would eat every day as it isn’t cheap but it is great value as the food is excellent, the beer a good price, (there’s also reasonably priced wine!), plus superb service and it was just oh so good to have tablecloths and proper menus for a change.

James and Cindy own a unit in an apartment block just behind the Marina and they very kindly entertained us in their well designed apartment and showed us all the facilities- including a fabulous outdoor entertainment space that residents can hire for corporate gatherings and private parties. The view over the marina and across the Strait to Singapore was spectacular.
The apartment block also had a gym and a fabulous pool in which we had a wonderful swim.


It made us think what a great spot Puteri could be for people like us who have family in Australia, India, England, Japan and Vietnam. Being next door to the world hub of air transport, Singapore, but with much cheaper rents, it would be the perfect spot for family visits and also for friends to join us – when we get our floating apartment that is!

And of course, conveniently placed for us to visit them. Food for thought – maybe one day we will make Puteri our home port!

On our first day there, after we had checked in to Malaysia (so very well organised by the Marina personnel who walked us through the process and even provided us with a ride in a golf cart over the short distance to the Ferry terminal where all the officials sit), we decided to take advantage of the “free” shuttle bus into Johor Bahru.

We were literally the only people on the bus until a young man waved it down. Once aboard the driver, who spoke no English, asked the man (a very handsome Middle Eastern gentleman) to have a chat with us to tell us that because we had no ferry ticket we had to pay. It was exceedingly cheap so we didn’t mind but were quite surprised as the ferry terminal officials had been keen to tell us about the Wonderful “free” shuttle. I suspect that the money went straight into the driver’s pocket but it wasn’t easy to refuse to pay!

At least the driver knew the best place to buy phone credit – an older style shopping mall with an indoor market selling a huge array of fresh fruit and vegetables, and many other things besides.

We caught an Uber back which was so cheap (literally around the cost of two fares on the “free” shuttle bus)  that we wondered if it even covered the cost of the driver’s petrol. Uber is definitely the way to get about in Malaysia as there is no arguing about the bill and the drivers are without exception friendly, helpful and good natured.

We were very fortunate to have ringside seats for the swim leg of the Iskander Puteri Challenge – a huge international event which over two days  included a Triathlon after child and youth races.

The swimming leg for the Triathlon literally went past the back of our boat and we also had a great view of the junior events in which much shorter distance were swum.

We were so impressed with the flawless organisation, the level of participation in the junior events (did some schools make it mandatory for their students?!) and the great care that was taken of the swimmers – especially the younger ones.

A ring of kayakers waited like a flock of anxious ducks as the little ones (aged six to ten – some of them really tiny) completed their hundred metre swim. There were also lifeguards in the water swimming close by giving confidence to the competitors and their parents alike!

There was a great atmosphere and we really enjoyed the buzz created by the event. 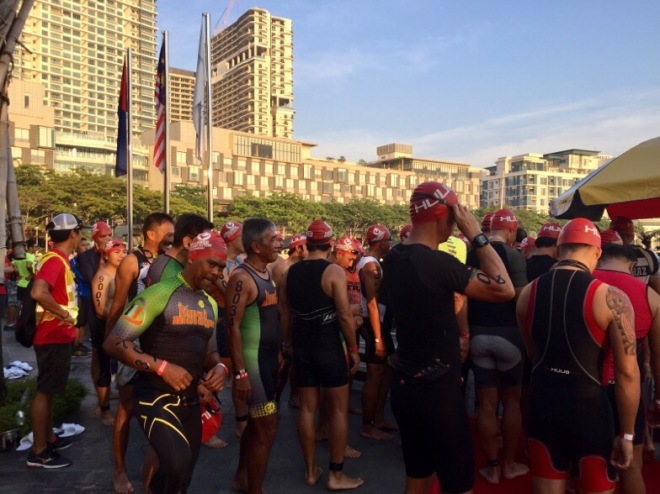 The day before we left to move on up the Malaysian coast, Cindy and James generously took us out to their favourite Yum Cha restaurant a little way from Puteri.

It was great eating Yum Cha with people who knew the best dishes to order and we had a long and delicious brunch ending with one of James’s childhood favorites – a green sponge containing a runny egg custard which bursts in your mouth like lava and if you’re not careful you literally end up with egg on your face! ﻿