We had a beautiful couple of days at Koh Phanak in Phang Nga Nay but too soon it was time to leave for Ao Chalong in Phuket to do some boat maintenance and prepare for our trip to the Andaman Islands.

One of the urgent jobs was to get some new blinds for our hatches as the original covers that came with the boat had degenerated in the sun and looked extremely tatty. Not a good look when just about to put your boat up for sale (leave a message if you’re interested!

We contacted the lovely Aod (pronounced Odd) who had previously organised the recovering of our sofa cushions and some canvas work- at a great price and with a fantastic job done (message me if you would like his number).

Capt’n Birdseye went to collect him but there was such a huge swell that it would have been impossible to bring landlubbers Aod and his assistant in those conditions. Even the experienced sailor would feel uncomfortable!

So we decided to go round the corner to Nai Harn Bay where Aod said he would meet us the following day. 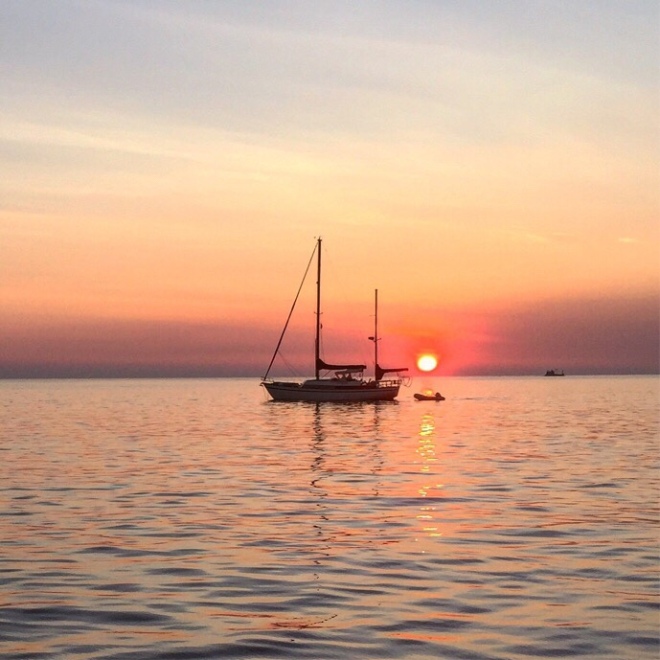 It was beautifully calm at Nai Harn although landing on and taking off from the beach was rather hair raising as there was an unpredictable surf which could easily swamp the dinghy or almost tip you up. Fortunately we discovered that the “Yacht Club” as was, had stopped charging a fee to park your dinghy at their little floating plastic jetty so that’s where we headed for when we went ashore.

As we were leaving Ao Chalong we were saddened to see a smallish catamaran sinking at anchor not too far from where we had anchored. It was such a shock to see a perfectly good boat’s demise and wondered who she belonged to and why hadn’t they checked on her? We tried to ring the yacht club as we thought it could possibly belong to one of its owners. Unfortunately the phone call went to messages and after trying three times we gave up.

It was good to see Aod again and he took away some of our shade covers to restitch and measured up for our new blinds. In just three days we were back at in Ao Chalong with a perfect job done at a very reasonable rate.

A great (and inexpensive) job done

The blinds roll up neatly and are fastened by Velcro 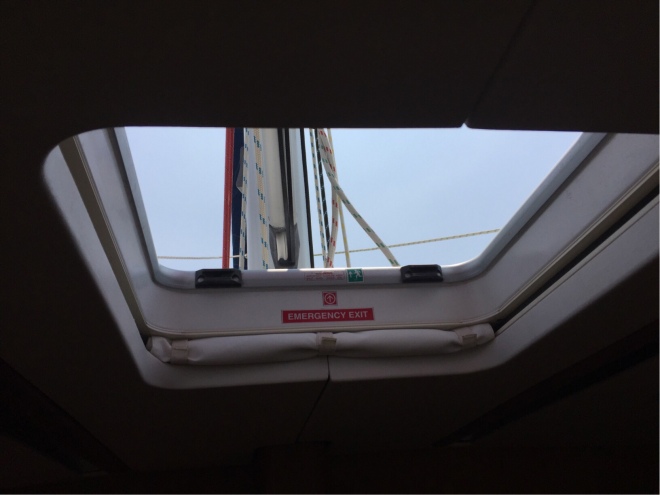 Another very amiable person to deal with was Paul of Octopus Marine, an obliging and very tolerant Aussie electrician who we employed to connect wires to enable new functions, update our chart plotter and to give our electrical system a “once over”.

The tolerance and Paul being an-all-round good bloke was in evidence on the Friday night when Capt’n Birdseye was installing a new starter battery and suddenly we were plunged into darkness with fridges, freezer and stove out of action. He thought he had fused the whole system! Despite being out for the evening Paul came to our rescue and after checking everything, discovered that the system was fine and said that if the good Capt’n had simply continued to install the new starter battery, all would have been well.

The wiring for the new chart plotter functionality required turning half the boat upside down. The other half of the boat was turned upside down with a repair to the bilge pump. There was stuff everywhere! 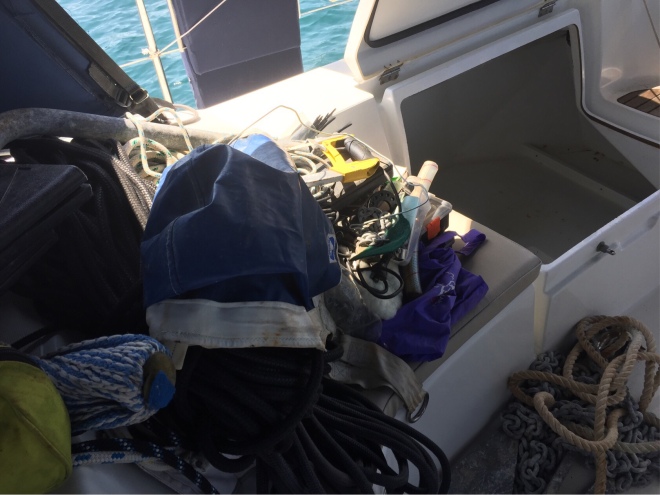 Once it was all put back together we rewarded ourselves with a meal at the Mahasamutr restaurant which is on the headland above Nai Harn Beach and has the finest view, as well as great service and really good food. 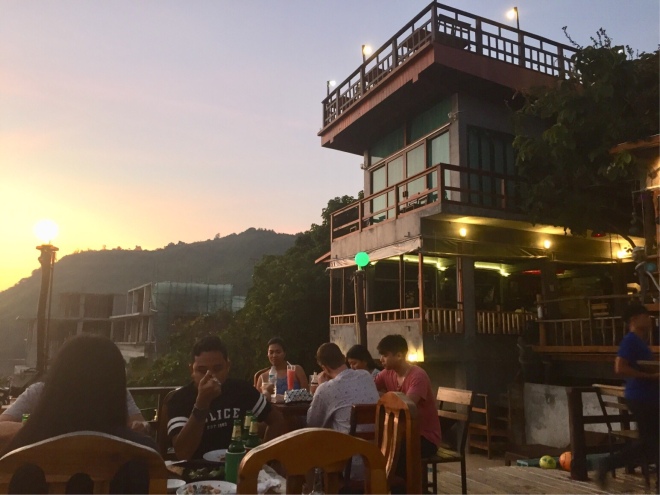 It’s a great place to watch the sun go down 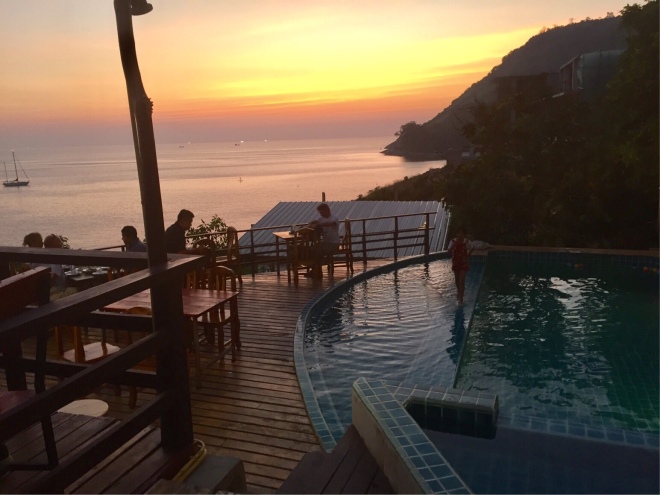 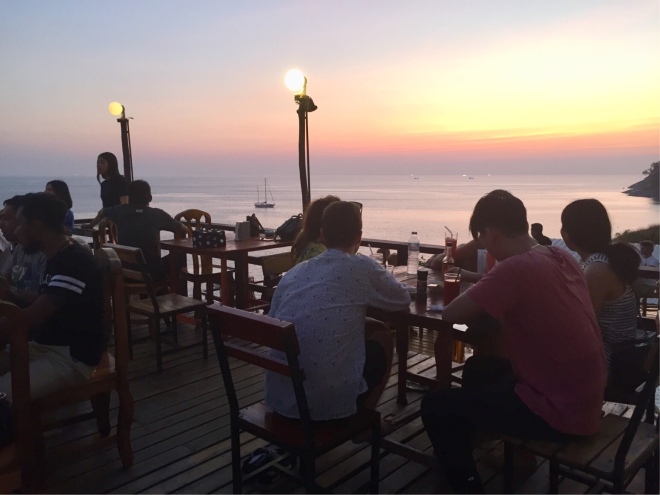 We enjoyed the good restaurants and the glorious sunsets of Nai Harn but soon it was time to go back to Ao Chalong to do our final provisioning for our trip to the Andaman Islands and to catch up with more friends from the Sail2Indonesia Rally.

The fabulous view from Mahasamutr

One of the stunning Pinisi boats anchored at Ao Chalong

On the way back we were once again cursed by plastic – there is so much in the ocean it’s almost inevitable- when a bag became entangled in our prop. We were in a busy spot along the route that all the tourist boats

Take back to the jetty but there was nothing else for it – Capt’n Birdseye had to hop over the side to cut the offending plastic away. 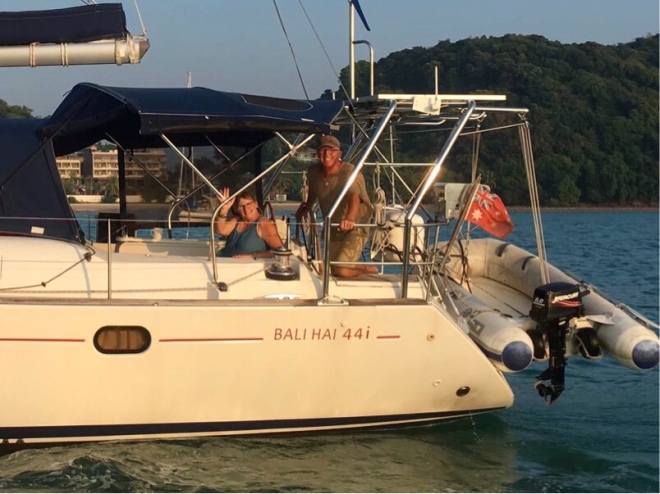 It was great to catch up with the crew from Pasifique who had dropped briefly into Phuket from Langkawi before setting sail for Sri Lanka and also to catch ch up with the Beach House crew who we hadn’t seen for at least half a year but who we were sailing in company with to the Andaman Islands.

A lovely catch up with the Beach Houses and the Paseafiques

The following day was our last before setting sail for India again so Beach House, Yantara and Bali Hai spent the day buying last minute produce, making meals for the trip and readying our boats for the three day, three night trip.

Mini frittatas ready for our trip to the Andaman Islands

That evening we had a celebratory meal on the sand at the Beach Bar, Panwa Beach Resort in Cape Panwa, just round the corner from Ao Chalong. We reminisced about last year’s visit to the wonderful Andaman Islands, anticipating our second trip with excitement and curiosity – this time as part of the “Sail Andamans Yacht Carnival.” 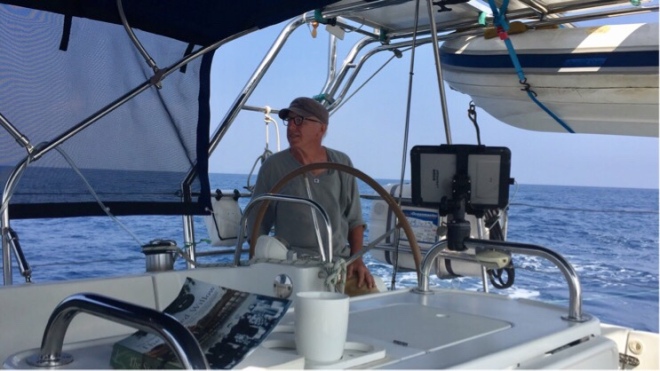 And we’re off – Beach House too!

One thought on “Maintenance, a sinking boat and leaving for the Andamans”