We had arrived in Mayabunder, on the northern part of Middle Andaman Island, late in the afternoon so we waited to go ashore for the first time until the following morning. 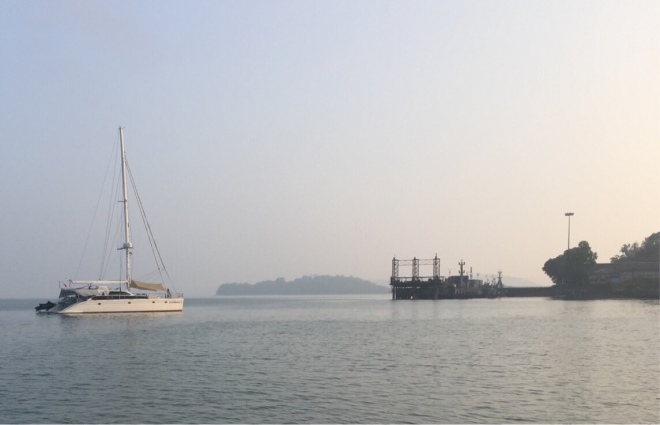 Access to the shore wasn’t easy – along the beaches were huge notices warning of crocodiles so the idea of taking in our dinghies wasn’t exactly appealing.

The only alternative was to head for the seriously rusting (and high!) jetty and try and find a way to clamber up.

The jetty at Mayabunder

Two of the local ladies workng on the jetty

We found a place where we could scramble up without too much difficulty and made our way to the jetty entrance where we were stopped by a group of officials and asked for our papers. 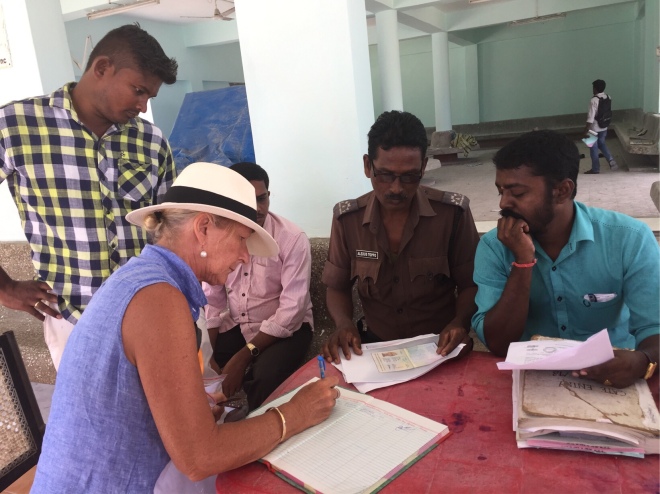 Rita from Beach House signs in at the jetty entrance

We had been warned to carry a copy of our restricted area permits at all times but the officials and their four or five “helpers” dressed in civvies demanded that we give them copies of our passports, visas and ships papers. It was Saturday morning so the Harbour Master (who we thought might be a little less adamant) was having a day off and we had no option but to come to some agreement with the motley group of people who were very adamant that they needed copies of every document they could think of.

After some discussion we agreed to find a Xerox shop, make copies of all our documents and bring them back later in the day.

The walk into town was quite pleasant and there was lots to see including cows feeding on the side of the road, the Government run guest house, goats foraging, market stalls with delicious looking fruit and vegetables for sale and various trucks, tuk tuks and buses meandering slowly passed us. 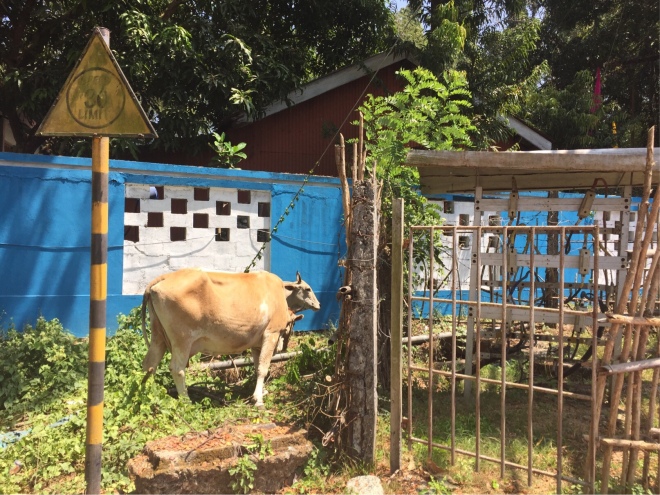 This cow’s head looks too small for its body but look closer, the head belongs to another cow! 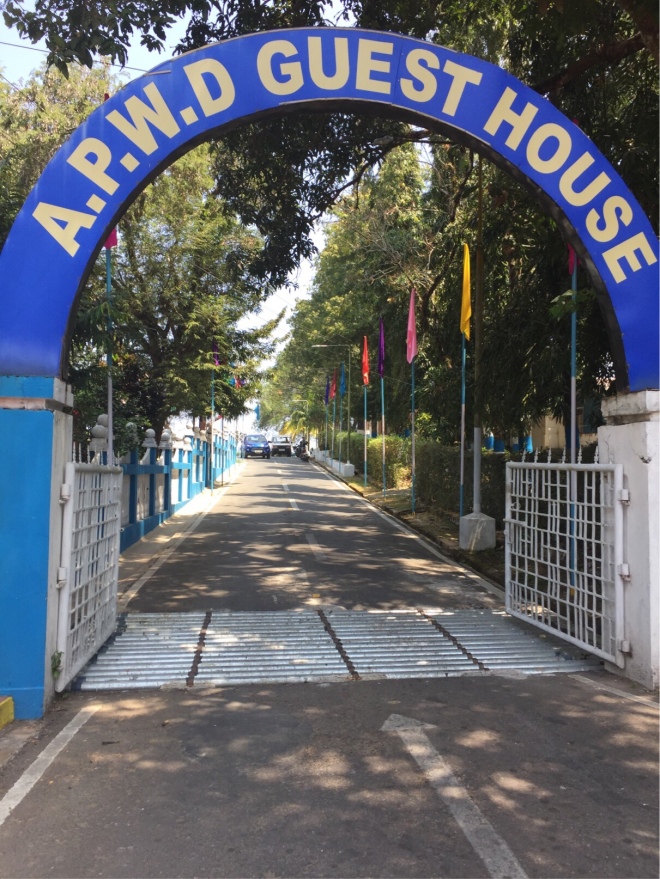 We didn’t get the chance to visit the government guest house. Maybe next time?

There were lots of very cute goats 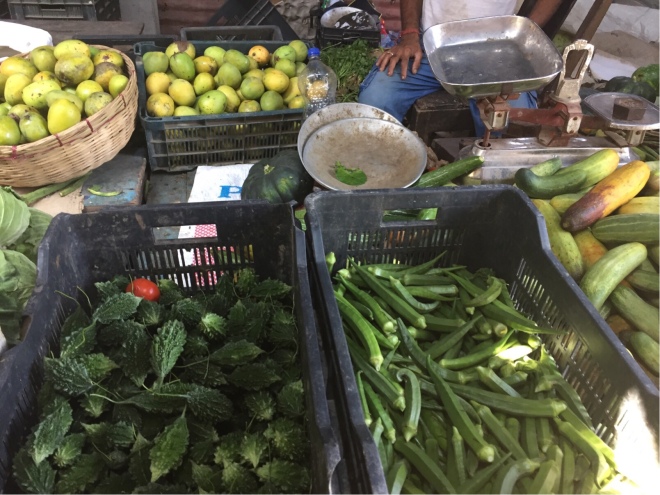 and stalls with beautiful fresh vegetables

A great view of Beach House on the road into town

Of course, being Saturday in India there was a cricket game on in town with quite a big audience watching. We stayed for a little while but conscious of the job in hand, pressed on.

The Xerox shop was a tiny “hole in the wall” but we had great service and soon had multiple copies of all our documents. We tried to get to the bottom of why our SIM cards didn’t work but ended up none the wiser.

Queuing up at the print shop 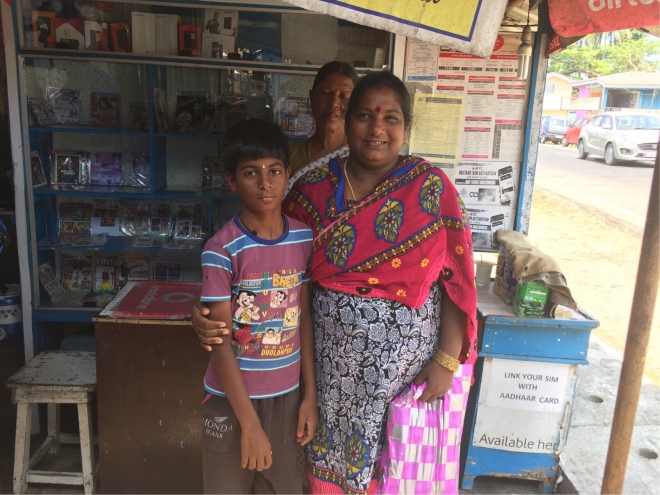 The print shop proprietor and their son

We had heard that there was a restaurant in Mayabunder that served good food and also served beer (very unusual in this part of the Andaman Islands) so with great anticipation we hailed tuk tuks to drive us to the restaurant at Hotel Sea and Sand.

Sadly there was no beer! There were no lights or air conditioning either. Eventually we did get fans and lights but still no beer. There was a long wait for food but it was OK once it arrived.

They made good use of local resources when building the restaurant

After lunch we asked the hotel if they could call us a tuk tuk or taxi but for some reason this wasn’t possible so we went out into the road in the hopes of flagging one down or even catching a bus. After waiting for what seemed an eternity we started walking and eventually after a bit of a stroll, we hailed a couple of tuk tuk drivers going home for lunch and a siesta. Fortunately they took pity on us and drove us back to the jetty.

That evening we noticed that the water in our showers on Bali Hai wasn’t as hot as normal even though we had run the engine for the same time as usual.

The good Capt’n worked out (in the end, the next day) that the coolant in the engine needed topping up. Before this discovery he had thought that there might be an air blockage and had activated the release valve in the hot water system more than a few times. 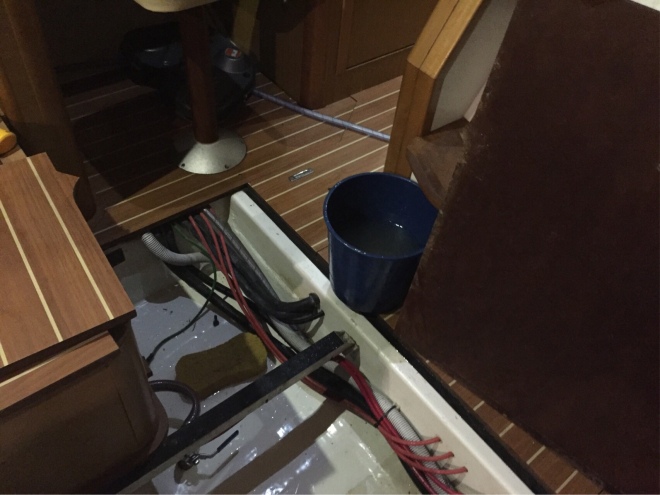 At least our bilges were lovely and clean

This was quite late at night and we were quite sleepy which is why we didn’t realise straight away that using the release valve emptied a whole heap of water into the bilges. By the second round of mopping up we were both more than a bit fed up. But this is all in a day’s work when living on a boat. The simplest issues can turn into a headache very quickly.

The next morning, thinking that all had been solved by topping up the coolant in the system, we followed Yantara and Beach House out of the harbour heading for Diglipur, the largest town on North Andaman Island.

As we motored out of the bay the harbour master warned us that MV Nicobar, a very large ferry, was approaching and that we were to keep the seaway completely clear for this vessel.

However, after motoring for a short while, we realised the engine was starting to get hot and although the header tank was half full of coolant there appeared to be very little in the lower tank. We switched off the engine straight away.

Fortunately we were near a little island (Aves Island) and we were able to get there thanks to a tow from Beach House and were able to anchor before MV Nicobar got too close.

Getting a tow from Beach House

Yantara was a bit ahead of us and had to backtrack to join us. Although they were nowhere near MV Nicobar, or remotely near where she was heading, there were a number of frantic messages from the ferry’s captain and the harbourmaster to keep the area clear.

MV Nicobar in the distance- no danger of a collision!

We could only imagine that they weren’t used to other boats being in the vicinity and maybe didn’t realise we all have AIS (automatic identification system) which enables you to see the name of every other vessel in the area, their heading and their speed.

Once anchored we had another close check and finally discovered a microscopic leak around the welsh plug. These plugs are used to cover the holes in the engine that were required during the engines creation. Coolant can cause the plug to rust and therefore develop a leak.

We realised that after all the messing around it was too late to make it to Diglipur so we decided to head back to Mayabunder. As the repair needed time to harden we decided to sail back (fortunately there was enough wind but it was a bit of a slow trip). The other boats arrived before we did and were prepared to help out if our attempts to sail onto the anchorage weren’t successful. 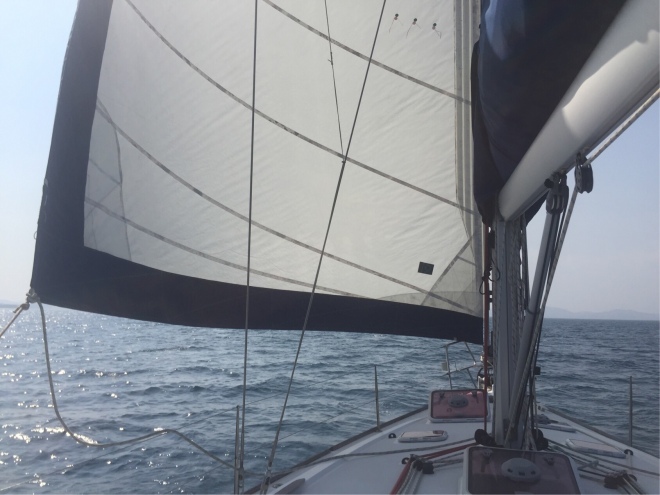 Sailing back to Mayabunder

Skipper of Beach House standing by to help if needed

Fortunately we managed to do a text book arrival and successfully anchored under sail. Later on, once we had settled, we tested the engine and much to our relief the repair had been successful and we were able to turn the engine on and make copious amounts of lovely hot water for our showers.