I think the Harbour Master at Diglipur was a little surprised that we wanted to anchor outside the town rather than at Smith Island where he had directed us.

Although Smith Island, a 20 minute boat ride away from Diglapur’s main jetty, is known for its beautiful white sand beaches and turtle hatcheries, we were keen to see the town which lies at the southern end of Aerial Bay, 298 kilometres from Port Blair. 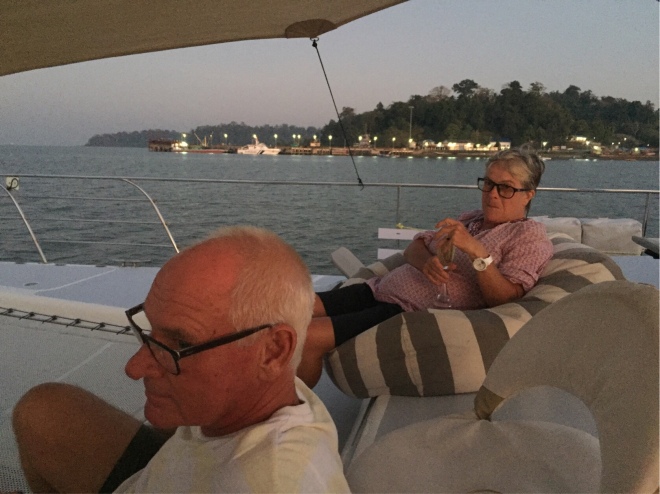 The largest town of North Andaman Island, Diglipur in reality is very small – the population of the entire region is only around 43,000 while the town itself is inhabited by around 10,700 people. 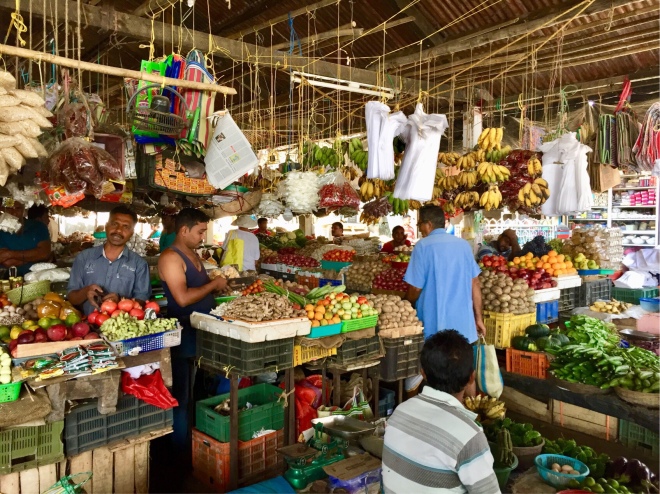 On the way up the coast we sailed past the Aussie Yacht Anthem Anthem who advised us via radio to anchor East of the jetty near the fishing co-op as the people were very friendly and you could easily catch a bus from there into town.

We had just finished anchoring there when the Harbour Master called us up on the radio and told us that he would rather we anchored south west of the jetty. So up came the anchor and we motored over to anchor in the new location. 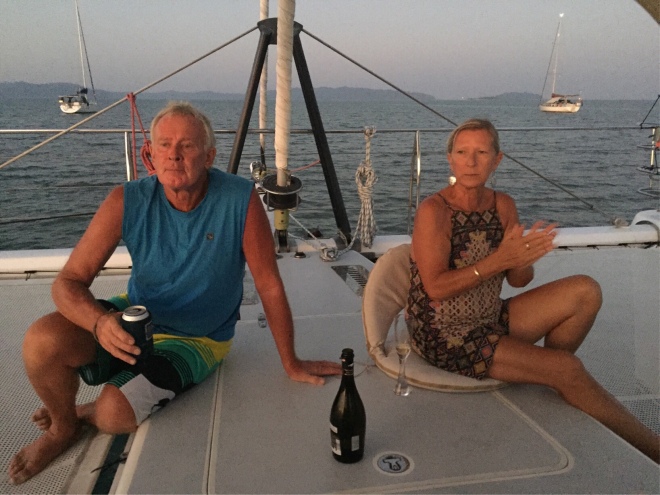 We were just about to settle down with our drinks on arrival (DOA) when the Harbour Master’s voice came over on the radio once again. Would we please anchor a little more to the East? So up came the anchor again.

Fortunately it was third time lucky and we didn’t have to move again.

The sun sets over our anchorage

There was easy access to the jetty via a set of steps and soon we were on dry land where met the very friendly and polite security person Krishna, who asked us for copies of our visas, passports, and of course, our restricted area permits.

Fortunately there was a ferry in so there were tuk tuks lined up outside the harbour gates to take us Into town. It cost 125 rupees (approx. Aus $2.45) per tuk tuk which held two to three people each to get into town.

There was a lovely covered market with great fresh produce and we also found a little supermarket that was quite well stocked (you could even buy Ferrero Rocher chocolates).

After a wander round town it was time for lunch so we hopped on another tuk tuk to visit the highly recommended restaurant at the Pristine Resort. It was quite a long but scenic ride to the resort – back to the wharf and along the winding coast road for about 20 minutes. About half way there we had to stop to fill up our tuk tuk with petrol from an elderly looking plastic bottle.

Fill her up please!

After a bumpy and dusty ride we finally arrived at the Pristine Resort gasping for a cold beer. Although there was a bar at the Resort (appropriately named “Poison Bar”) we were disappointed to learn that it no longer served alcohol of any description. Apparently there had been some extreme problems locally arising from alcohol consumption the end result of which was a complete alcohol ban.

Lunch is served but yes there’s no beer!

Despite the lack of cold beers, we really enjoyed our meal as the food was delicious. After lunch we went for a stroll through the Resort to the beach, encountering some fiercesome guard dogs who barked at us savagely and pulled at their chains. Thankfully we were able to give them wide berth and got back to our waiting tuk tuks unharmed.

The tide was out on the beach 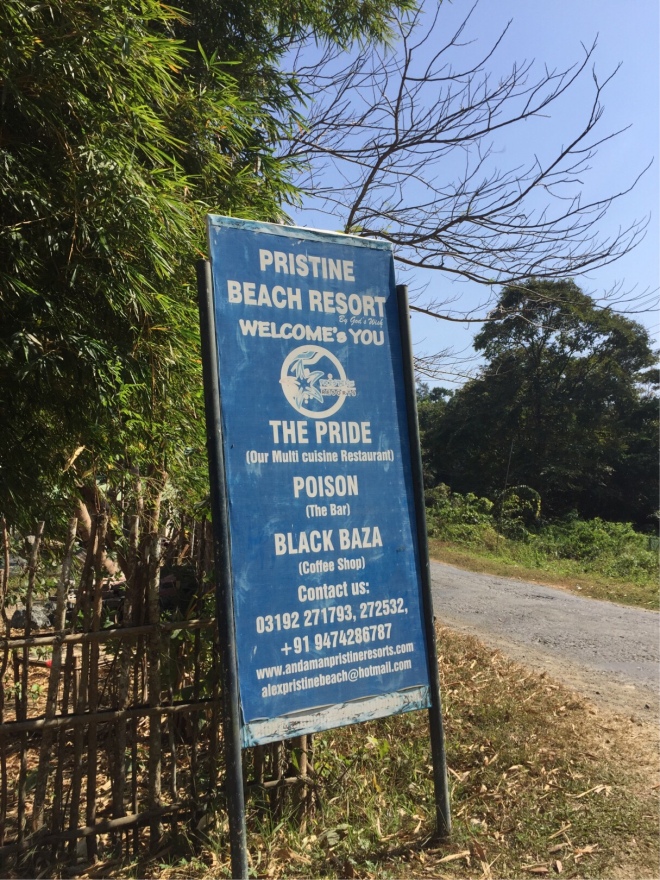 The drivers had luckily agreed to wait for us (for a small consideration) and drove us back to the local village after lunch to replenish our fruit and vegetables.

On our way back to the village on the tuk tuks

The following morning we left for North Reef Island at 8.30am. 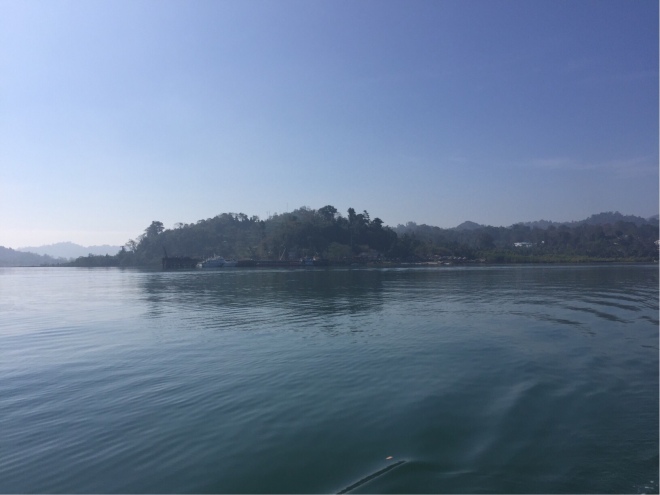 A beautiful, calm morning for our trip to North Reef Island

By midday we were about to go “over the top” of North Andaman Island – an exciting moment for us as very few yachts normally venture this far north.

As we turned west “over the top” we were at last able to have a great sail managing to hit over 7 knots in 10 – 15 knots of wind and arrived in Reef Island in the late afternoon in time for a swim. 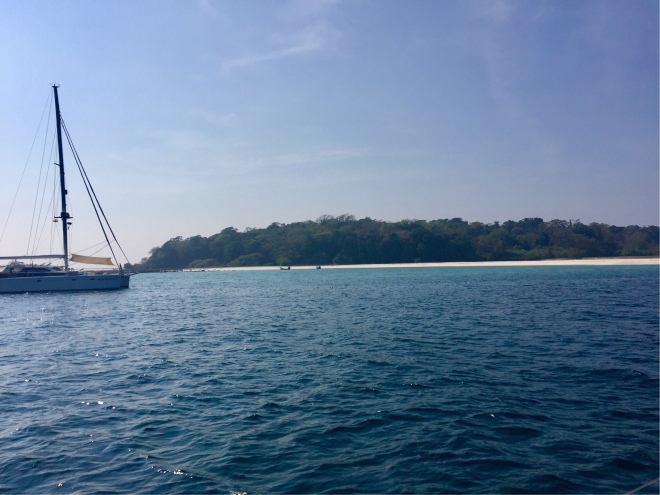 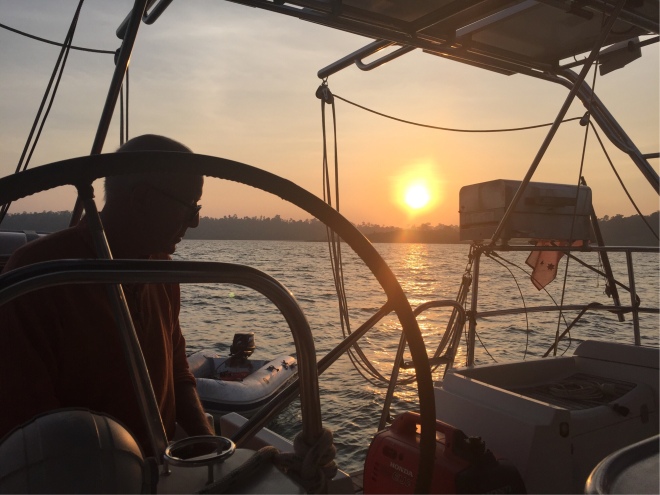