So we (Jonathan and Dot) bade a sad farewell to our yacht, in Langkawi Malaysia, sold our family home in Brisbane, Australia, and sold/gave away most of our furniture and other possessions. Now we were ready for a new adventure.

Having spent the last three years enjoying a fabulous time sailing to, and cruising, in SE Asia we were ready for some changes. We wanted to see some different cultures in Europe, spend time exploring more inland areas and not be constrained by the worry of leaving a yacht unattended.

Besides, we also wanted to look for a Lagoon 420 or 421 Catamaran either in Europe or the USA which we hope to cruise back to SE Asia.

How were we going to travel to all the places we wanted to explore? We certainly didn’t want to stay in a series of hotels or even Air B and B for weeks at a time. Apart from the expense, it would be a pain to organise and the thought of living out of a suitcase for long periods did not appeal. We decided the answer was a camper van – as we were cashed up we could afford a new one. They are so much cheaper than a yacht!

My main criteria were that it must have an island bed and good refrigeration. Having struggled with a v-berth in our otherwise very easy to live on Jeanneau 44i I definitely wanted to be able to walk round our bed when making it. No more bed yoga when changing the sheets! As I am a fridge devotee and have dreamt about having a walk in fridge, I was not willing to let standards drop and to put up with a tiny bar fridge and a freezer that could only fit a bag of frozen peas and some ice cubes.

My husband’s main requirement was that the van would be left hand drive as we were going to be driving round Europe. Apart from that, we were quite easy to please!

After scouring the Internet over some weeks Jonathan realised that strangely, there were really very few left hand camper vans with island beds and large fridges despite the many, many different makes worldwide. However, he did eventually find one – a French brand, Chausson – that fulfilled all our requirements.

The next hurdle was to find out where we could buy one. As we had British passports and family in England we could have bought one there but because the new camper vans in the UK are mostly right hand drive that would have been difficult.

Our best bet would be to buy one in Europe but this wouldn’t be that easy as there were certain rules about residency to comply with plus the problem of our foreign language skills being limited to school level French (almost 50 years ago).

After many hours of research Jonathan found a French camper van hire company which also sold camper vans. The best thing was it was run by native English speakers Phil Spurge and his wife Hannah who were originally from the UK. After a couple of phone calls with Phil we learned that in order to register a vehicle in France we would have to start a French Company. That sounded very daunting but fortunately Phil could assist us with that. 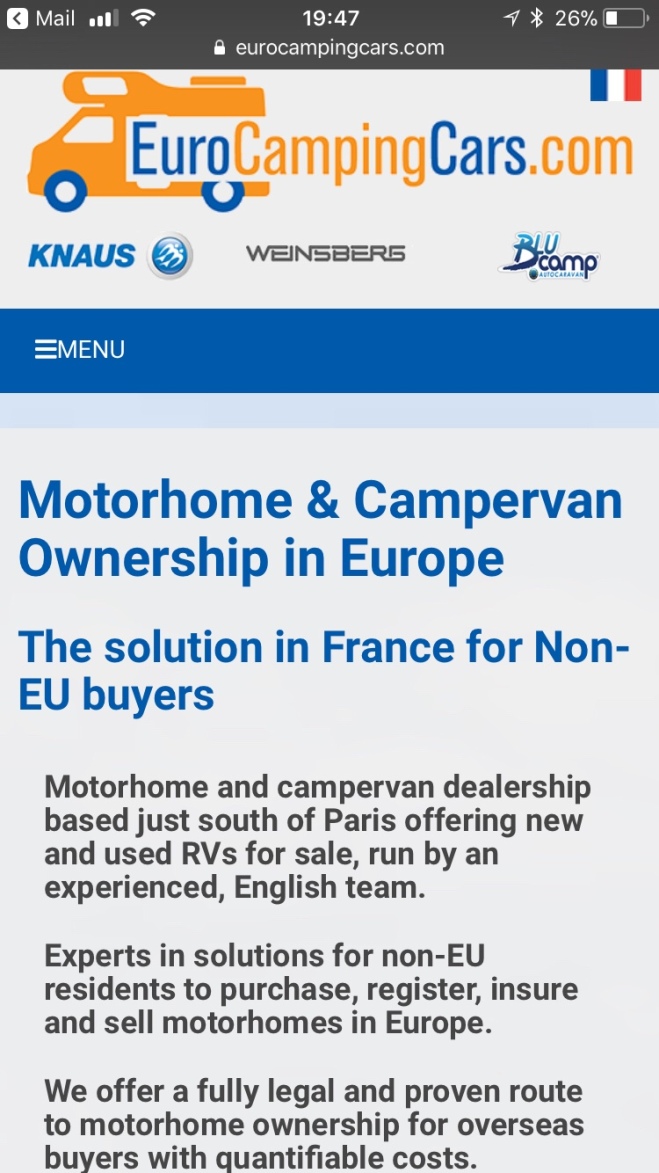 However, first we needed to find a suitable vehicle. Phil told us that there was quite a waiting list for buyers wanting to buy a new Chausson. He didn’t normally deal with that brand but he said he would make some phone calls to see if any of his contacts had one for sale. He was quite dubious about finding one but said he would give it his best shot.

Amazingly, and much to even his own surprise, Phil found one through his dealer network almost straightaway. The van had been ordered by someone and then for some reason not picked up and was up for sale in Turin!

So the wheels were set in motion (no pun intended) – we ordered the van and through Phil we were put in touch with the legal company who would set up our “Societe Civile” so that we are able to purchase and use a French registered Motorhome.

In the meantime, we had an important date to keep in England – one of my nephews and his lovely partner were getting married! It was going to be a great family time as our son and partner were also flying from Australia and our daughter and her partner were coming from the Netherlands.

We were also going to catch up with all our English relatives and be part of another great celebration – one of my sister’s 70th birthday.

In the week after the wedding and before the 70th party the six of us conducted a lightening tour of southern England visiting amongst other places, Battle, Hastings, Rye, London, Bath, Salisbury, Avebury Rings, Stonehenge, Northampton, Cambridge and Thetford.

Our son and his partner headed for a whirlwind trip to Scotland and Ireland and our daughter and her partner took the ferry back to their home in the Netherlands where we were all to be reunited the following week.

After the bustle of the past two weeks Jonathan and I enjoyed a quiet time in the calm of my sister’s house in Broadstairs, a quaint and unspoilt traditional seaside town in Kent.

From there we were able to catch up with some old friends (but sadly not enough time for too many visits) before leaving for Pijnacker a small town near Delft, in the Netherlands.

One thought on “Ready for a new adventure?”