In this world of rapid and constant change isn’t it wonderful that some things stay the same – exactly the same.
We are sitting in the peace of Port Clinton, a beautiful natural harbour north of Yeppoon in central Queensland, where 28 years ago minus one day, Jonathan and I, one year married, anchored our 28 foot traditional timber yacht Rondo.

“It’s pretty mind blowing as all we can see are beautiful hills, pristine beaches and clear blue water and only one other yacht in this huge harbour. This must be the most beautiful anchorage ever” I wrote in the ship’s log all those years ago. And that’s exactly how it is today, except after having the place to ourselves we now are sharing it with two other boats (see if you can spot them in the photo below).


Likewise, our last port of call, Lady Musgrave Island, 50 miles north of Bundaberg, appeared quite unchanged except maybe the light on the western tip of the island was a good deal brighter! Still the same iridescent turquoise water, the noise of the waves breaking on the reef, the chattering of the mutton birds and the white knuckle ride through the lagoon entrance where any moment you expected to hit a coral bommie and sink your boat. The water is so clear that you can see down to the bottom, even in ten metres of water, so every time you go over some coral you get that sinking feeling that you are going to scrape over it. But no, breathe again, you made it!

While some things stay the same, there are so many differences between sailing in 1987 and sailing now. For one thing, we weren’t retired! In our early thirties we were stealing a year away from our careers to have an adventure of a life time. So we definitely felt that time wasn’t on our side. We met some beautiful older people and realised they were having much more fun as they weren’t on a timeframe – if they wanted to, they could stay an extra few days, or weeks to enjoy the dugongs or watch the turtles nesting. That’s when we agreed that as soon as we were retired we would be off cruising again.
One of the biggest differences was that the first time round we had no chart plotter, or iPad with amazing navigation programs. The only electronic navigational aid was one of the first, very basic and bulky satellite navigation systems purchased at the London Boat Show which I had brought to Australia in my hand luggage. It was very reliable but due to the shortage of satellites usually told us where we had been maybe 10 or 20 minutes earlier which, as you can imagine, wasn’t at all helpful, especially when trying to get into an anchorage.
Approaching Lady Musgrave Island for the first time our log reads”sighted Lady Musgrave Island – slightly more North than we thought but we may have not been correcting enough for the current.” I can’t imagine trying to get in there just using our trusty hand bearing compass and charts, taking sights and working out our course! In fact, not trusting the Sat Nav (which everyone but everyone warned us against as it was ‘new fangled’ and definitely not to be relied on) nearly got us into extreme danger. We truly nearly (in the words of the 1980s advert for the resort) “got wrecked” on Great Keppel Island. 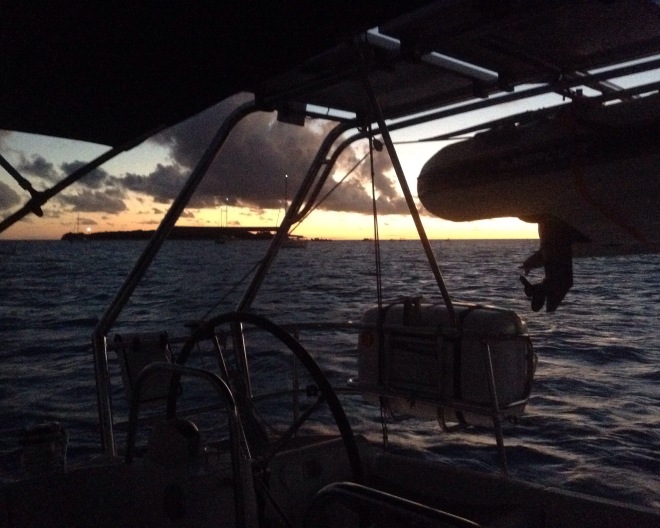 Again, our 1987 log reads (written by Jonathan) “worse than anticipated night. Arrived 2.30am not 6.30 am as planned. Surrounded by large unlit rocks and islands. Hove to for a while. Mistook Barren Island for Egg Rock when taking bearings. Sat Nav proved us wrong. When we realised where we were got underway and headed south into 25 knot southeasterly winds and heavy sea. Very frightening experience, dawn was a long time coming.”
Thank goodness for modern navigational aids! Thank goodness some things stay the same while other things change for the better.

8 thoughts on “Get wrecked on Great Keppel Island!”