We were extremely tired after a day of festivities in Namrole which followed an overnight sail the previous night, so we collapsed in bed reasonably early.
Unfortunately, a few of the local lads were so thrilled with the Karaoke equipment left out after the welcoming festivities just near the jetty and overlooking the boat anchorage, that they decided to sing every Indonesian pop song they knew and by the sound of it, many others they didn’t.
The bass was turned up as high as it could go, pounding the air with a bizarre marriage of reggae beats and traditional Indonesian syncopation.
On top of this was overlaid a melody of sorts, each one sounding the same as the one before. The noise got louder and louder as the evening wore on, with occasional moments of the noise being wound back – only to be turned up again to max volume just as we had drifted off to sleep.
Finally, having been jerked awake for the umpteenth time, at 3.15 am Jonathan decided enough was enough!
Still in his pyjamas he lowered the dinghy down, and drove to the jetty in a real froth.
My main thought was that I hoped the culprit wasn’t the Karaoke-loving Vice Regent polishing up his repertoire for the last night’s gala dinner!

As I waited for him to come back visions of bailing him out of prison or following him to a place of exile on another island, passed through my mind.
Fortunately it was just three small teenagers who thought the yachties at anchor might enjoy a little concert at full blast, in the wee small hours!


They were very apologetic and thankfully switched the system off after Jonathan’s quite forceful request which went something like “it’s 3 am turn that ****ing racket off!!!”, with accompanying mime.
The next day we struggled to be ready in time for the day’s events and judging by the haggard looks at the quayside there were many others who also lost sleep!
Despite being slightly weary we had a great day. We drove on buses to a fast moving but being the dry season, quite shallow, river where narrow rafts made from four or five sticks of bamboo tied together, awaited us.


We boarded these rather fragile craft – most of us choosing to crouch rather than sit as their buoyancy couldn’t quite cope with the weight of well fed Westerners and sitting meant getting very wet!


Once on the other side we went for a glorious walk through coconut groves and wild native vegetation for about an hour, until we reached a footbridge where bizarrely, a pipe and drum band was waiting for us. It sounded strangely like a band of Orangemen parading down the streets of Ulster, but with bamboo pipes and just one man beating the living day lights out of a battered drum. 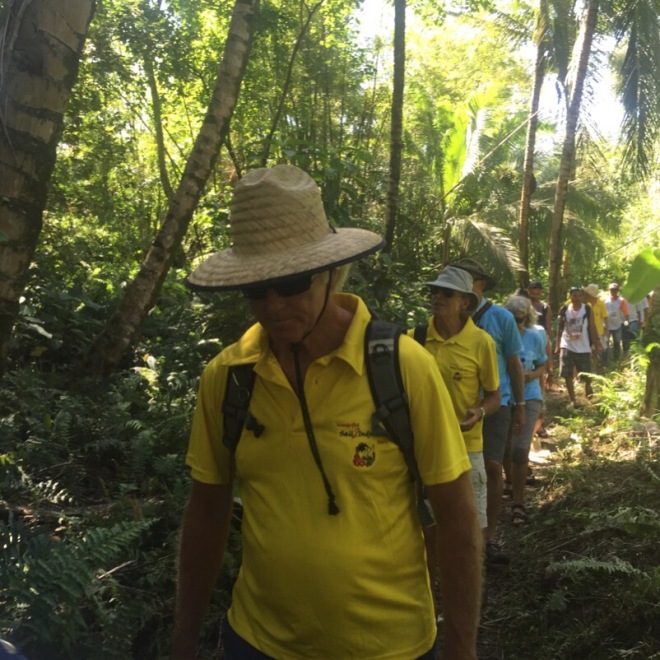 Again, we were greeted by the elders and several ceremonial dances were performed as we were led through the village.

There were a mixture of building styles but many of the homes were built in traditional materials – bamboo and coconut weave. There were children lining the streets and hordes of people all of who wanted photos with us. 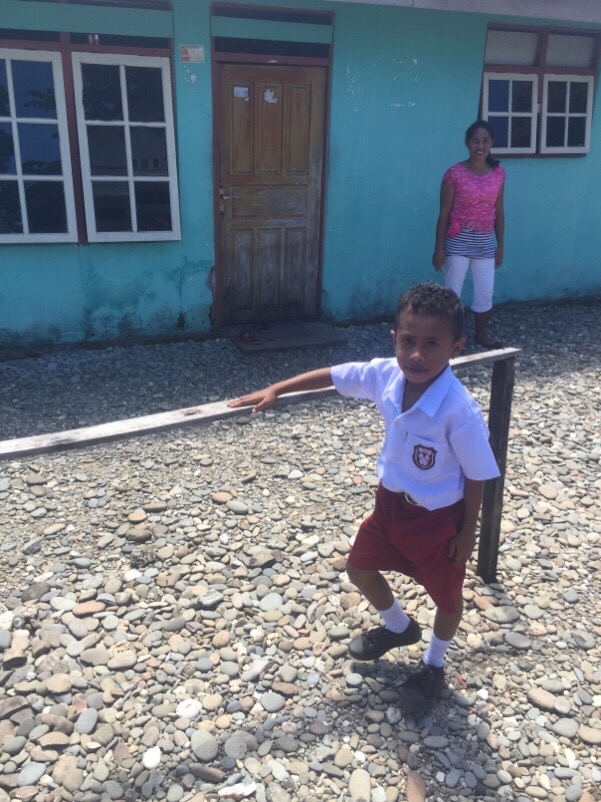 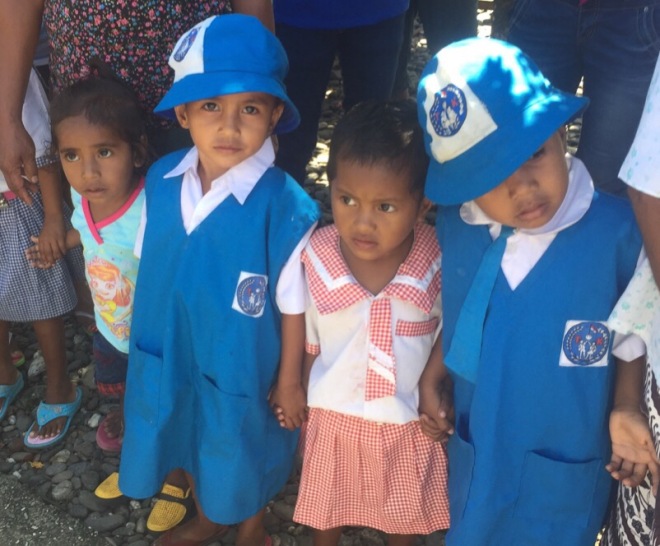 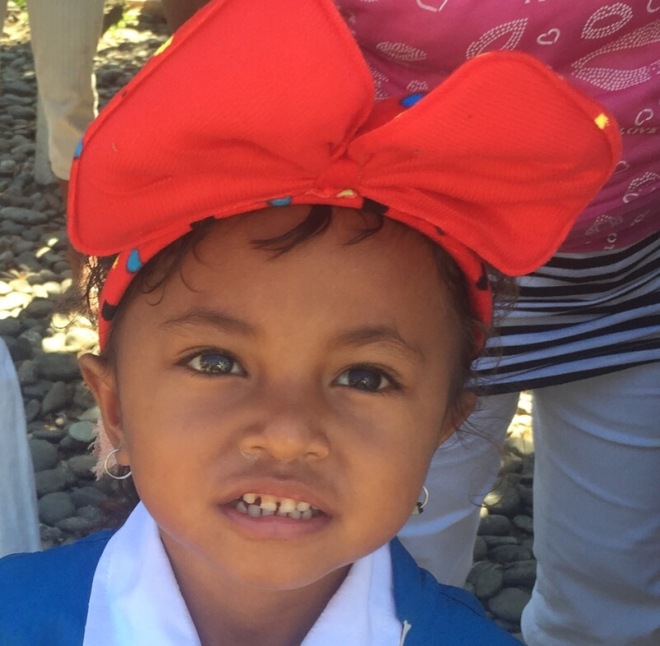 We arrived at a beautiful beach – we were the first Westerners to come here so we felt very honoured. The first part of the beach was sandy but further along it was covered with the most beautiful large, smooth, stones – very like those river stones that cost a fortune at the local garden centre in Australia! 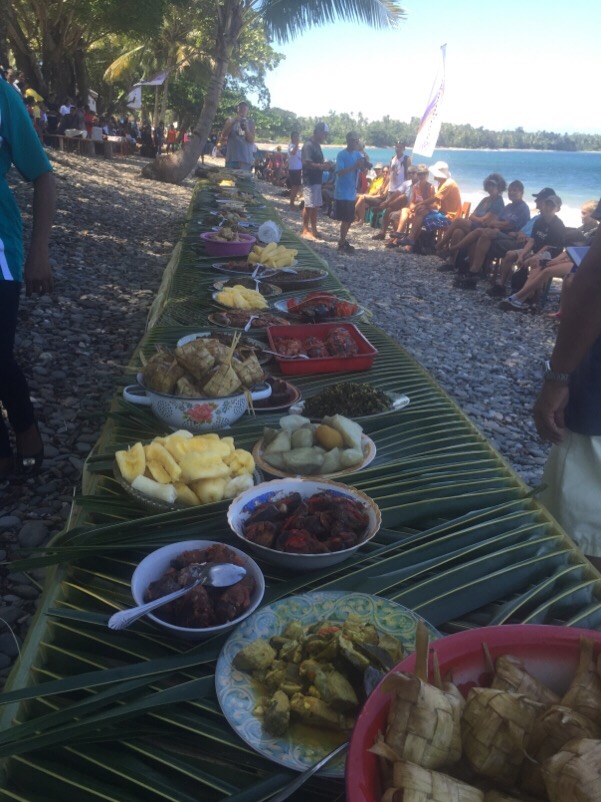 Another wonderful feast was laid out for us on long tables covered in banana fronds – beautiful fish, green vegetables, sweet potato, rice, cassava, omelette, etc etc.
After lunch we were taken to the other end of the beach where there was s crystal clear fresh water pool and stream fed by water that found its way through the limestone cliffs. There were a number of caves but these had religious significance to the local people so we weren’t able to go in.
The headman asked permission of the ancestors for us to swim in the pool and many of us jumped in for a cooling dip.

Some of the group opted to take a boat ride back in one of the “Putt putt” boats and others visited the local school that had been built with the assistance of the Australian Government. 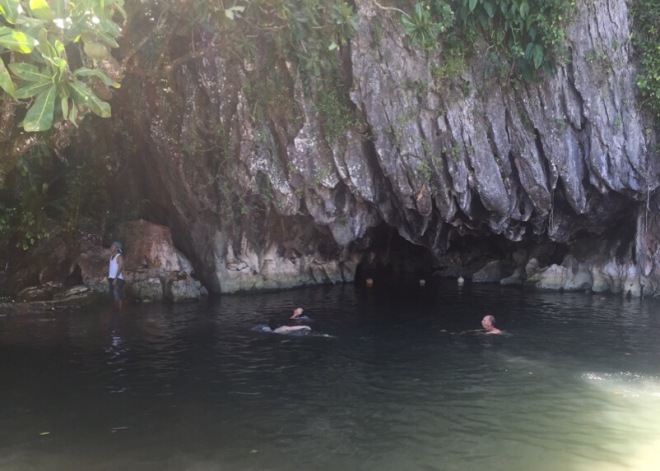 Sadly, although the buildings were fine, the school was painfully short of materials and the head teacher was extremely grateful for the coloured pencils, pens and felt tips that people had brought.

We then walked back through the forest and finding no craft to take us over, waded across the river!

The buses hadn’t arrived to pick us up so we started walking. After a while, a truck driver going back to Namrole offered to give us a lift so we all got in the massive tip up truck and enjoyed the ride back in another new mode of transport! 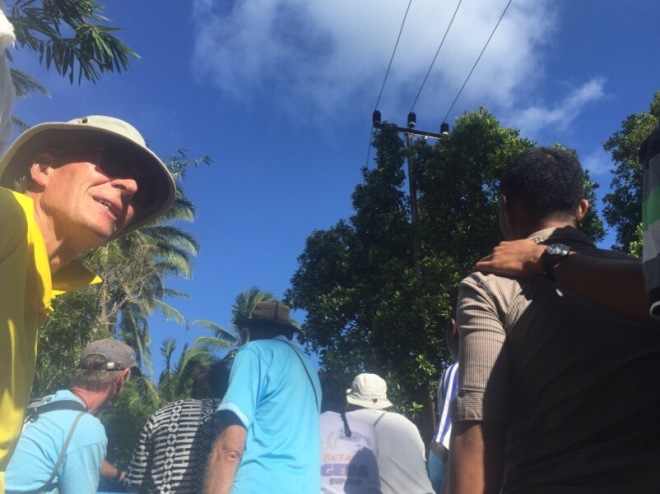