We were staying for a couple of nights at stunning Kroko Atoll and were just contemplating going for a snorkel when we heard that two single handers were on their way into the anchorage. 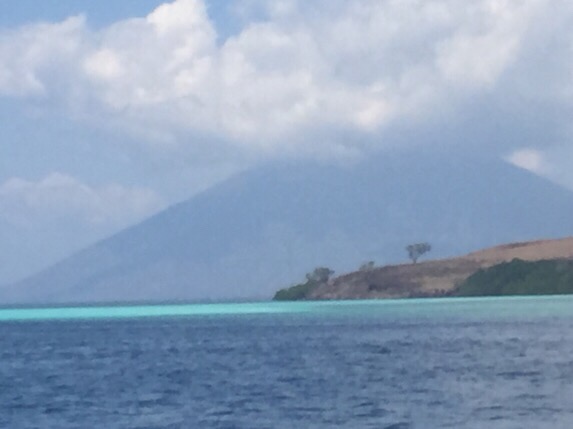 To get in you have to follow an “S” shape channel – tricky but not impossible, especially as when the tide is low and the sun is high you can pretty well see where the channel is.
Unfortunately, most of the electronic charts for this entrance are actually incorrect so if you follow them you will run into trouble.

One of the boats, Amity, had arrived in the anchorage and we were just having a chat with Australian skipper Evan when we heard that the other had become stuck on a reef.
Unfortunately he hadn’t received the radio message from Evan on Amity that the charts were out by a considerable amount.
Jonathan and “Dutchies” Marieke and Hildebrand from New Zealand registered  Carrie immediately jumped into their dinghies to see what help they could give and Evan turned his yacht around to also lend a hand.
I stayed on board and let Werner, German/Canadian skipper of the stranded boat Thalassi, that help was on its way.
Left behind, all I could do was monitor the radio. At one point more help was needed as it appeared that Thalassi was stuck fast in sand.

By the time I found the phone number of Raymond our Indonesian “Mr Fixit”, the moment had passed and it seemed that Evan in Amity, with the help of a local fishing boat, was going to be able to pull her off.

The young man and his wife in the putt putt were on their way to catch fish to sell at the market but they spent at least two hours going to the aid of the stricken boat which was incredibly generous.
Time was at the essence as it was moments away from high tide. Once the tide went down the boat would become stuck further and the incredibly strong currents (6 knots!) would push her over and she would be beaten to a pulp banging on the reef.
Marieke who swims like a fish dived down to examine the hull – it was unscathed and stuck in sand but with coral bommies all around.
After several attempts to get Thalassa free using all the salty solutions in the rescuers’ combined and considerable bag of tricks, the final last ditch attempt was made.
All the anchor chain was taken off to lighten her bow and ropes attached (with some difficulty by the dinghies) with the fishing boat and Evan’s boat pulling with all their might, Thalassi grudgingly gave up her comfy spot on the sand and was free.

Because the fishing boat had very little steerage (just a paddle to steer by) Jonathan had to steer it using the dinghy to push its bow round.

The whole rescue took two hours and hearing all the frantic messages going back and forth on the VHF Radio, seemed touch and go right to the end. I was particularly horrified to hear Evan in Amity say “hang on I’m on the reef now!” Thankfully he just touched and all was fine.

Later when Amity and Thalassi were safely anchored the International Rescue team had sundowners on the beautiful sand atoll. Muss, the fisherman who was such a wonderful help joined us and we presented him with a brand new dive mask and fins as a thank you. 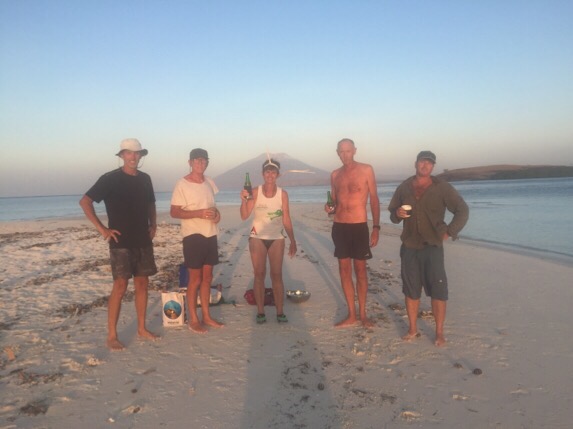 As the sun went down the sea turned into a wonderful shade of the lightest of blues tinged with pink overtones. The sand spit and the water melded together in one gently glowing whole all the way to the foot of the volcano.

Photos just can’t replicate the experience but as we revelled in the glowing colours we reflected how wonderful it was that a day that started so badly could end so beautifully. 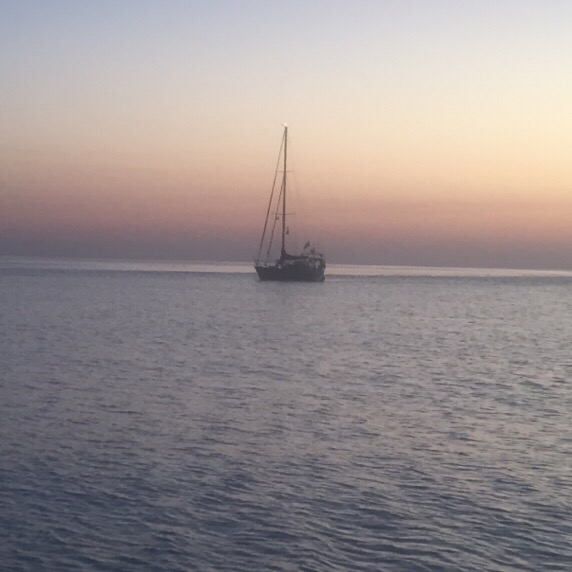 Before it was too dark to see our way home we piled back to Bali Hai for a sausage and chicken kebab BBQ and the story of the rescue was recounted from every angle.