There were a few crews still in Maumere when we came back from our epic two-day trip to Mt Kelimutu so it was lovely to have one more evening get together at the SeaWorld Dive Resort before setting off for our next “official” destination in Maurole (pronounced “more rolly”).

We had spent a rather frustrating day in Maumere town trying to access funds from our bank account in Australia. Despite the fact that we had told our Australian Bank, the NAB, both by email and by phone, that we were travelling for an extended time in Indonesia, they decided to stop our cards (yes, both of ours) after we had used Jonathan’s and then tried to use mine afterwards in the same ATM. Thanks NAB!
Fortunately we were able to change some Australian currency at the dive resort so were able to get some shopping and pay for various essentials.

We had a smooth motor/sail in the company of Carrie to Maurole, the next official rally stop. We arrived in the early afternoon to find that only a handful of boats had turned up.

After impromptu drinks on Bali Hai with “the Dutchies” from Carrie and Fruits de Mer (an afternoon swim off the back of the boats and Bali Hai morphed into a swim up bar,) we got ready for the evening’s festivities.

We had to land on the beach and we learnt that because there were a lot of stones we had to aim for one particular part of said beach. Our first big mistake was that we hadn’t checked out the landing spot while it was still light. The second mistake was having a wee drink beforehand at the Bali Hai swim up bar.

As we surfed in, Jonathan realised that we hadn’t put the wheels of our dinghy down – essential for pulling the dinghy up the beach, and impossible to put down in very shallow water.
So he turned the dinghy back out to sea just as a big wave was about to break – he was soaked and I was quite wet but in very light clothes that would dry out quickly. Back to square one – at least for Jonathan who had to go all the way back to the boat to change!
In the meantime I stumbled along the beach in the pitch dark hoping I wouldn’t fall in a hole, trip or slip.
After what seemed a very long time I eventually arrived at the venue to the cheers of the other yachties who had been waiting for reinforcements to swell their meagre ranks.
For the first time since we had arrived in a Indonesia, the festivities started on time – everything was ready to go exactly at 7pm!
Sadly I left my camera behind so I don’t have one photo to share. Instead I have included some of my favourite shots of cultural activities from the trip so far!

Unfortunately of the relatively few yachts that were there, several crews had decided to get to the venue a little late to avoid the endless sitting around that we are used to! 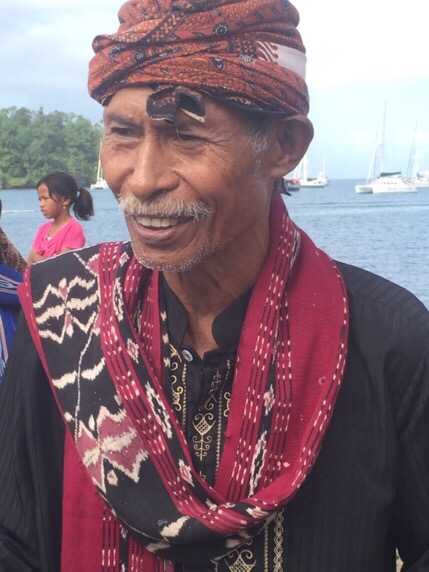 To make matters worse there were about 50 men already seated and waiting for things to kick off – all senior members of their various clan groups – all in traditional dress and each wearing a slightly differently tied/decorated headdress that apparently depicted their relative status and from which clan they belonged. 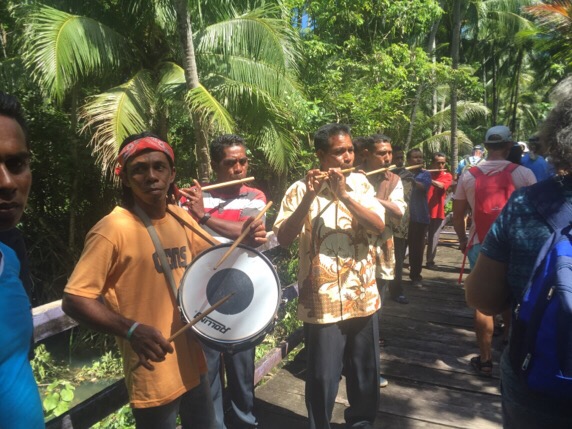 Eventually we all arrived (including Jonathan in fresh clothes) and the program began.

I felt very sad that there were so few of us there as the evening’s entertainment was brilliant – quite the best we have seen so far. The performers were extremely professional, well rehearsed and just fabulous to watch. The MC was great, kept everything moving at a cracking pace and switched from Indonesian to English  and back again with ease. 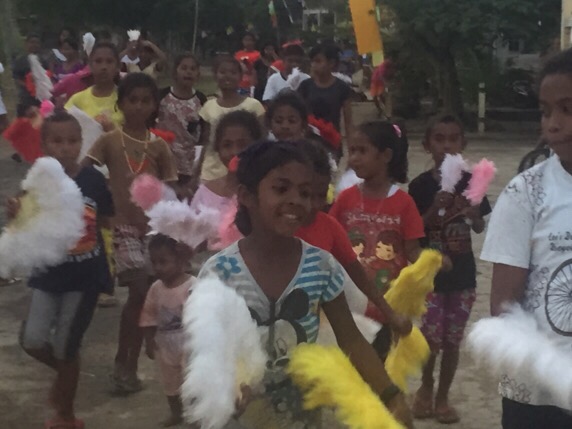 There were two particular dance/vocal performances which depicted local customs and historical events which were really impressive. 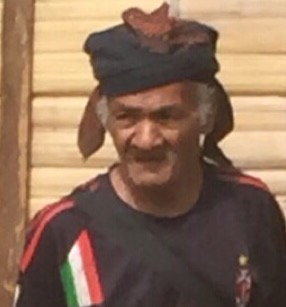 After the entertainment we were presented with a huge banquet – apparently the beef in the Beef Rendang that was served had been seen by one of the rally participants walking round earlier that day. Can’t get fresher than that!

The night ended with everyone dancing – there is a traditional circle dance here that is a bit like the Greek “Zorba” style dance except no one waves their hanky around!

By the end of the evening an awful swell had developed and one of the dinghies had been swamped by water.

Fortunately, we had already had our dinghy mishap so it was someone else’s turn and we arrived safely, if haphazardly, on Bali Hai.

That night sleep was not an option- it was so rolly that we kept on getting shaken awake or were rolling into each other or the cabin wall.

We decided that Maurole was indeed “more rolly” than a previous stop, Namrole which some wag had dubbed “damn rolly”!