The highlight of our trip to the Labuan Bajo area was the visit to Rinca to see the renowned Komodo Dragons.

We had to leave before dawn to sail to Rinca and get to the ranger’s station before it got too hot and the dragons retreated to the shade. After 10am they tend to lie around like statues and aren’t as scary (that actually sounds fine by me!) 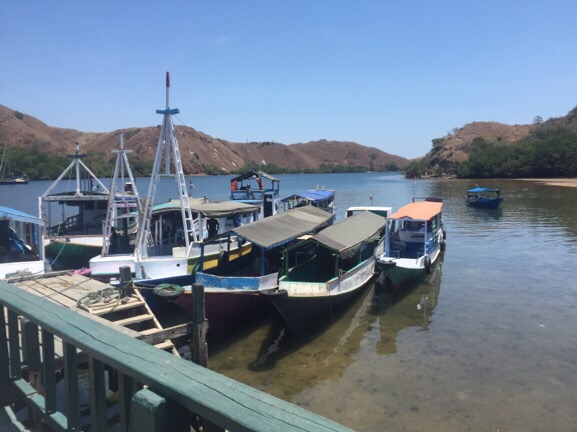 Question: How many tickets does it take to enter the National Park at Rinca? Answer: For two of us it took 10 and if we were going to snorkel it would have been 12!

There was one each for coming in our own boat, one for having an engine over 40 HP, one each to enter the Komodo National Park (there are numerous islands in the Park) one each to enter the Rinca section, one each to hike the trail, and one between us to pay for the guide!
Surely it would be easier just to charge a blanket fee of $50 or $60 for two tickets?

Jonathan has a theory that at least one of the tickets was a “ring in” printed by the Rangers so that they can cream off a small amount from each person! Hope that’s not true but I’m afraid corruption here is rife and government employees are generally quite low paid so who knows….

So we went for a lovely hike and saw the giant dragons – they aren’t the nicest of creatures I have to say- they have a venomous bite which acts like an anti coagulant and they also inject toxic bacteria and pathogens when they bite. Fortunately they generally only eat around once a month and then they eat a massive meal – about 80 per cent of their body weight.

Apparently swallowing can be a long process (20 minutes for a goat) and they have been known to try and force the carcass in by ramming it against a tree – this sometimes results in the tree being knocked over such is the force used! Well I suppose if they haven’t eaten for a month you can hardly blame them!

It certainly was an experience seeing these massive creatures (some more than two metres long and can grow up to three metres) but having heard that they can eat humans and having seen them once, I have no desire to see one again – not even the little baby ones that are around the size of the monitor lizards we often see in and around Brisbane. 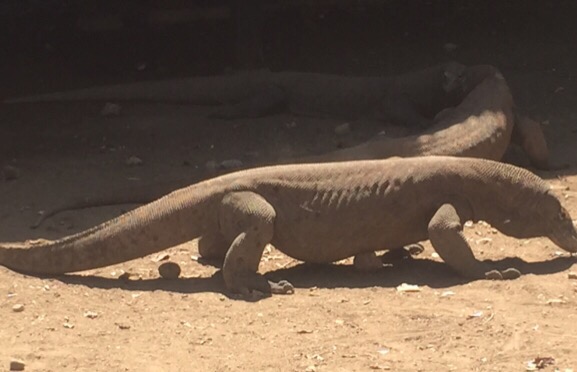