Continuing our journey south to join the West Kalimantan rally starting on 2 July, we left Pulau Rimau just after the sun rose heading for Pulau Talang where we would spend the night.

It was a long but uneventful day although we had quite an uncomfortable swell for the whole trip so we were happy to reach our destination.

The following morning we had a much shorter hop to get to Pulau Pangkor where we planned to spend a few days as we had missed out exploring the island when we called in to Pangkor Marina in November 2015.


We anchored between the island’s two ferry piers almost directly opposite the Pangkor Marina.
On the shore we could see Kampung with stilt houses, mosques and ferries plus one or two sizeable municipal looking buildings.
We were keen to explore so once the boat was settled we took the dinghy ashore and looked for somewhere to tie it up or pull it up on to the shore.
After a couple of fruitless sorties to the shore around the ferry terminal (muddy, filthy, no access to the town) we ended up tying up at one of the ferry piers – out of the way of any ferries.
We were a little worried that we might be asked to move but the lovely ladies who collect tickets and count the people on the ferries helped us and offered a steadying hand as I climbed up the slippery steps.

We had a good wander through the little township, looking at the shophouses, chancing on a fish shop where workers were cleaning the ink out of squid, past a mosque and even seeing very tame Lesser Hornbills on the wall of a school.


We decided to take a taxi to the other side of the island to have dinner at “Daddy’s Cafe” which turned out to be a delightful feet-in-the-sand eating place with delicious food and great service. 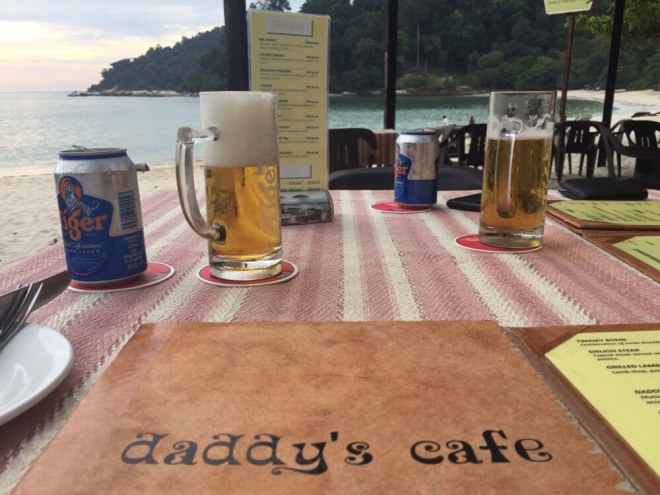 While we were waiting for our dinner to be served we were treated to an absolutely glorious sunset.

The following day we took a ferry over to Marina Island as we wanted to check out the cost of leaving Bali Hai there towards the end of the year when we are planning to do some land travel.


That afternoon we decided to take Bali Hai round to anchor in the bay where we had enjoyed dinner. It looked so beautifully calm and we were keen to try the restaurant next door to Daddy’s Cafe and also to explore a Chinese temple we thought we could see at the end of the beach.
What had first put us on to the temple was that at dinner on the first night, we had noticed that fishing boats would head into the anchorage, mill around for a few minutes and then turn round and shoot out of the bay again and disappear.  After watching this happen a number of times and knowing how superstitious fishermen in South East Asia appear to be, we hit upon the possibility that the fishermen were entering the bay to pay their respects at a holy shrine.    The shrine proved to be much bigger than we expected and we were quite intrigued by all the “cartoon” characters and figures. Were they part of the temple or an attraction to entertain the children while their parents made an offering? We didn’t find out.

After a pleasant sail round the island (meeting Rally friends Pyscho Puss en route) we dropped the anchor in time to get ashore before sun down so we could enjoy another stunning sunset but this time with Bali Hai in the frame.

As we dinghied back to Bali Hai a fisherman called out across the water “you go close- can do, can do”, indicating towards the rocky headland and all the while miming a rolling boat saying “no this, no this”.
“Nah don’t think we want to pull the anchor up and fiddle about anchoring again,” we said to each other “besides look how calm it is, no worries!”
Note to self: Never ignore a local fisherman, they know much more than you do when it comes to the sea and local conditions!
Sure enough in the early hours we were woken to crashing cups and glasses and such a wild roll that it felt as though we were going to turn turtle any moment!
At first light, several sleepless hours later, we took off to return to our original anchorage, hoping for a better sleep that night.

One thought on “Never ignore the advice of a local fisherman”