This is the last my out-of -“real time” posts detailing Bali Hai’s four week trip to India’s remote outpost – the beautiful Andaman Islands. Thank you for sticking with it!

Before we left Port Blair, the long arm of Indian bureaucracy had us noting down the names of each anchorage we stayed in so that our port fees could be calculated. This was despite submitting an itinerary for our trip north and then one for when our daughter stayed with us and a third for when we travelled south, as well as attempting to call in each day (not very successfully) to let Port Control know where we had anchored.

The final total we had to pay wasn’t an outrageous amount and it would have saved everyone a lot of time and angst if there was just a one-off anchoring fee, the same price for everyone.

We had our last date with the splendid Ambassador motor car, with its capacious boot providing plenty of room for Yantara’s and our hefty bags of laundry plus all the last minute items we purchased – including tasty take out food for the trip home, some souvenirs and a few cans of beer.

After sad goodbyes to our agent Rathnam, his wife and his staff, our driver Vijay, the guys on the jetty who did such a fine job of taking care of our dinghies and helping us and our chattels in and out of them to the mantra “Slowly, slowly, yes, yes, yes,” we went back to our boats, the skippers returning soon after to meet Immigration officers on the jetty to get our passports stamped and to obtain our port clearance certificates.


All too soon we were departing Port Blair after an extremely enjoyable four weeks in this lovely, remote, corner of India.
As we departed at 2.30 pm a navy frigate also leaving the harbour. We were trailing after it like three ducklings behind their mother when out of the blue the frigate changed course and went directly across Yantara’s bow, causing the skipper to have to slow her down to avoid a collision.
Despite that slightly unnerving experience we soon settled down into the rhythm of the passage.
There wasn’t much wind and what there was, was right on the nose so we gave the engine a good workout and made a decent amount of water as we went.
At around 4.30 pm we were visited by around thirty dolphins. They were busy fishing so they just came for a look and didn’t stay to play in the bow wave. About half an hour later another group of about 12 arrived and this time played in our bow wave for at least 10 minutes leaping and prancing until one by one, or in small groups of two or three, they peeled off and left us to the setting sun and a glorious sunset. 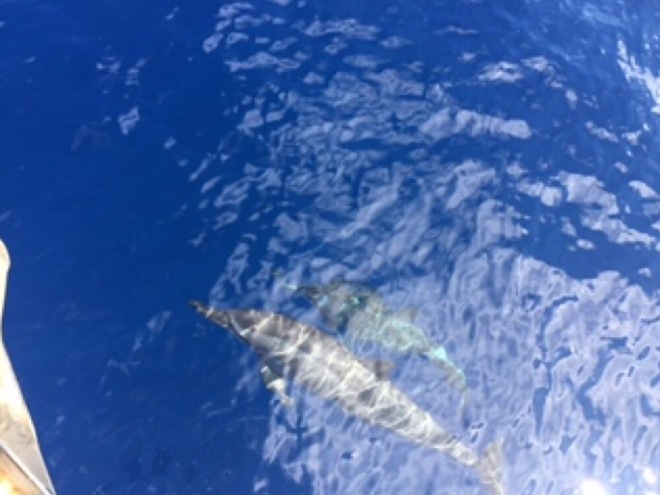 Soon after, a delicate new moon rose – you could see the whole of the moon quite clearly – like a huge, black, perfectly round egg sitting on a wafer thin crescent-shaped sliver of purest white gold. 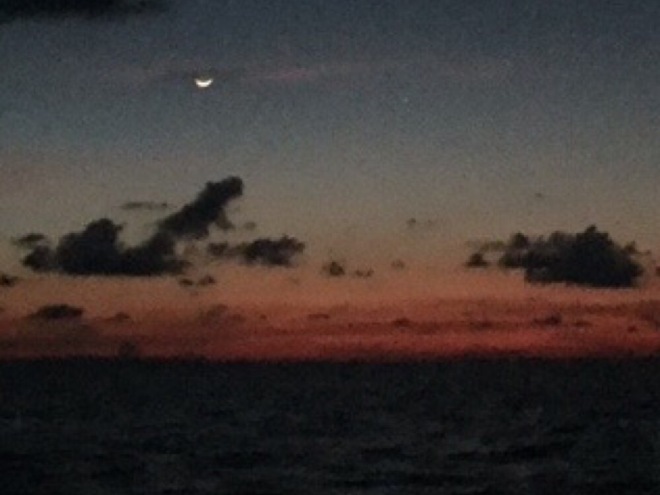 A couple of times it seemed the wind had turned enough for us to sail but as soon as we raised the sail the wind moved back to the East. After this happened twice we gave up.
At 12.30 am, towards the end of my watch, I noticed that at 11.10 degrees East and 033.36 North we had reached the 8000 nautical mile mark since leaving the boatyard in Brisbane two years ago. A landmark for us.


The next day we were able to put the genoa up for an hour but frustratingly after an hour it had to come down again.  After an uneventful day at 5pm we saw a baby dolphin leap high in the air, executing a double pike with a rip entry back in the water. The next minute two adults came to play in our bow wave. We sat on front of boat enjoying a lime juice and tonic watching them play for what seemed like ages.
Just as we got back in the cockpit quite suddenly the sea became disturbed with a big side swell and white caps all around us. After only five or ten minutes it was just as suddenly calm again and we were enjoying one of the chief pleasures of passage making – a beautiful sunset at sea.  We were able to motor sail the next day and a whale sighting in the distance caused excitement we had more dolphin visitors – first a lone one who didn’t stay and then a couple who had a lovely long visit, turning on their side to see what we were all about.
We also saw our first big ship since the warship as we left Port Blair -a freighter bound for Chittagong.
Around 1 am, we were surrounded by squid boats, and soon after that there was a severe electrical storm circling round us. Fortunately we didn’t get caught up in it but just saw the lightening forks all around us
During the night Smart Choice was unlucky enough to get something wrapped around its prop shaft.  Fortunately it didn’t disable the propellor but the skipper had to lower the revs and nurse her along for the remainder of the journey.
We were behind Smart Choice so we’re able to standby while the skipper took her into Nai Harn Bay when we reached Thailand where he dived over the side to cut the big mess of old rope away. Not bad going having single handed her across from Port Blair! If you would like to read more about our fabulous trip to the beautiful and fascinating Andaman Islands start at the beginning from:

Or read the previous blog update at:

One thought on “The long arm of bureaucracy”