Burial mounds, mystical messages written in runes, a massive stone Viking ship buried in the ground, and a 14th Century Church were just some of the treasures that awaited us in the picturesque Danish town of Jelling.

The trip from medieval Ribe to mystical Jelling was just over an hour even taking the back roads and byways so we were able to have one last look at Ribe before setting off in the early afternoon for this small (under 4,000 population) but ancient and important historical town.

To our delight we discovered another ancient burial site along the way. The location was the tiny village of Randbøl where to the north of its Church, we caught sight of four bronze-age grave mounds. We found out later that there was a further mound (King Ran’s mound)) in the Church’s graveyard.

According to local legend, a battle was fought between two kings (King Ran and King Amled) in the nearby Gødding Forest. King Ran and many of his men were killed but it’s not clear if the other side experienced great losses. Ran was buried in the great mound at Randbøl Cemetery and the king’s men were buried in the mounds of Firehøj.

We climbed up one of these and enjoyed a great view of the other mounds and the surrounding countryside from the top.

Time was marching on and we decided that it was getting too late to look at the Jelling site that day so we drove for a few more minutes to the fringes of the Gødding Forest and found a delightful site to stay the night in a secluded car park surrounded by woods.

It was still early so we went for a lovely walk through the woods where we came across some unusual wood carvings and a tree trunk engraved with mysterious Runic symbols. 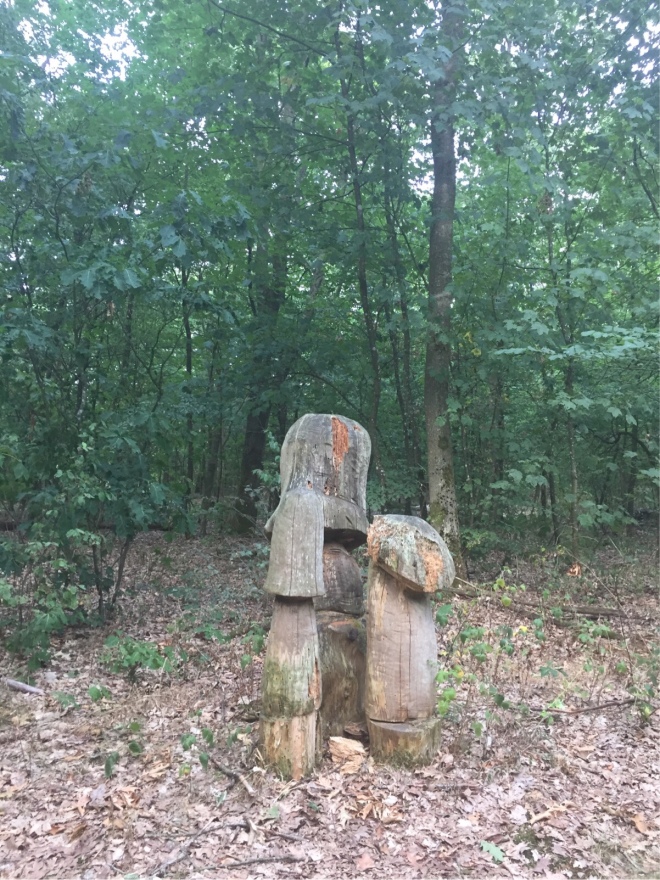 Later we tried out our portable barbecue for the first time and were very happy with the results. They were all the more delicious for being washed down by a very pleasant Bordeaux wine which cost the equivalent of AUS$4.60. 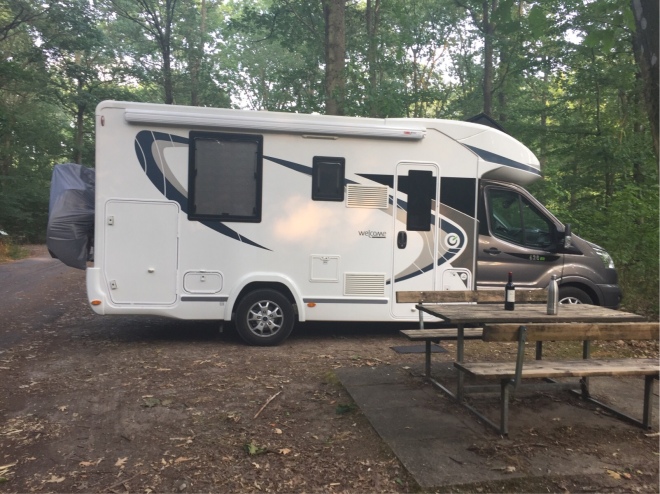 The next day we arrived in Jelling, which in the Viking Age served as the royal seat of the first monarchs of the Kingdom of Denmark.

Our first impression was one of slight surprise as driving into the car park we could see in all directions a mass of white poles of different sizes that we took for particularly bad “plonk art”. It wasn’t too long before we learned that these white concrete pillars actually mark out the approximate location of the original wooden stockade. More markers outline the shape of the buried 354-metre ship.

Build towards the end of the 9th Century, the Jelling stone ship is the longest ever to be discovered and it lies underneath of the two royal barrows.

The laying of stone ships was an early burial custom used all over Scandinavia, Northern Germany, and the Baltic States between 1000 BC to 1000 AD. The grave or cremation burial was surrounded by slabs or stones in the shape of a ship.

It isn’t known exactly how old the stone ship at Jelling is but the lichen on the ship stones which were covered by the south mound suggests that by then they had stood in the open for some 20 to 30 years.

The burial mounds at Jelling are very significant not only because they are the largest in Denmark but also because two Rune Stones were placed there. The larger and most important of these was placed by King Harold Bluetooth in memory of his father, first in the line of Danish Kings, Gorm the Old who died in 958.

The rune stone is considered Denmark’s ‘baptism certificate’ as it states “King Harald ordered this monument made in memory of Gorm, his father, and in memory of Thyrvé, his mother; that Harald who won for himself all of Denmark and Norway and made the Danes Christian.”

The smaller stone was erected by King Gorm who wrote “King Gorm made this monument to Thyra, his wife, Denmark’s adornment.” This was the first time that the name ‘Denmark ‘ had been written down and preserved.

The figure of Christ inscribed on the stone is to this day featured in all Danish passports.

Another fascinating fact relating to King Harold Bluetooth that we found out at the fantastic little museum at Jelling was how the wireless technology called Bluetooth get it’s name? For those of you who don’t know, it was named after King Harald Bluetooth Gormssan! He was famous for uniting Scandinavia just as the inventors of Bluetooth intended to unite the PC and cellular industries with a short-range wireless link.

The Bluetooth logo consists of the combination of “H” and “B,” the initials of Harald Bluetooth, written in the ancient letters used by Vikings called “runes.”

I love that you learn some amazing things when travelling!