Having spent way longer in Norway than we had planned, we decided to head for Sweden as quickly as possible. This entailed entering Finland at the border crossing just 37 kilometres from Kirkenes in Northeastern Norway and making our way quickly across the most northerly and remote part of Finland and then on to Sweden.

We would have loved to explore Finland but were now yearning for a bit of sun and some blue skies rather than dark, blustery days so we decided to push on.

This area of Finland is known as Lapland and it is extremely inhospitable and cold even in summer (the first snow often arrives in late August on high ground) and with a sparse population (3.4 per cent of the country’s total despite being the largest region.) 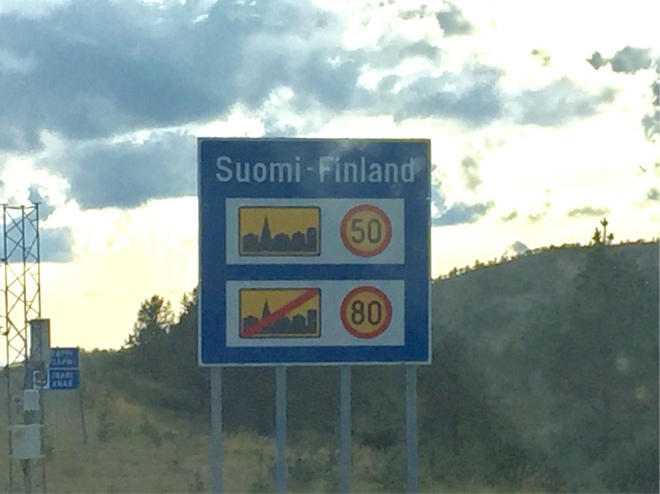 Our initial destination was Inari, Finland’s Sami capital. This was the first town on our Google maps route and it wasn’t until we arrived that we realised it was more like a small village than a town with a population of around only 580 people.

The two hour trip there was uneventful although the scenery was pretty with lots of picturesque lakes, thousands of fir trees and the very occasional isolated house. We scarcely saw any other vehicles except for a couple of tractors. With the exception of the service station just over the border from Norway (the one we drove to in desperation on the way to Kirkenes) there were no signs of shops or other commercial enterprise.

We had driven through Inari before we realised how small it was and an hour later stopped for the night in the Lemmenjoki National Park.

On the road again, heading for our next destination Sirkka, the following day, we were once more driving in increasingly remote and lonely conditions. Again, there were very few signs of life except for LOTS of deer including one beautiful and rare pure white creature. 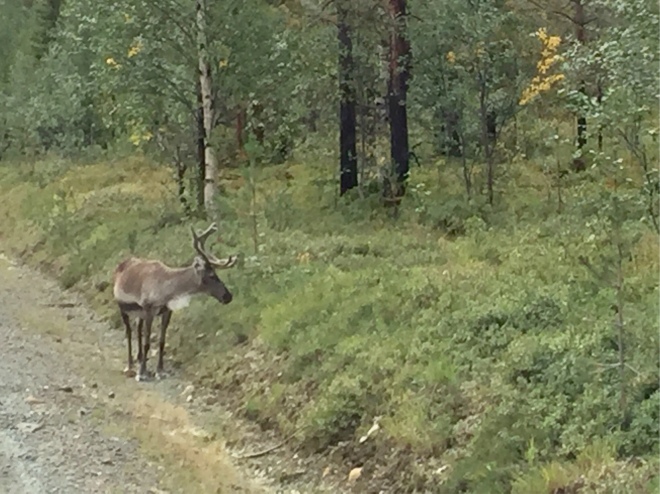 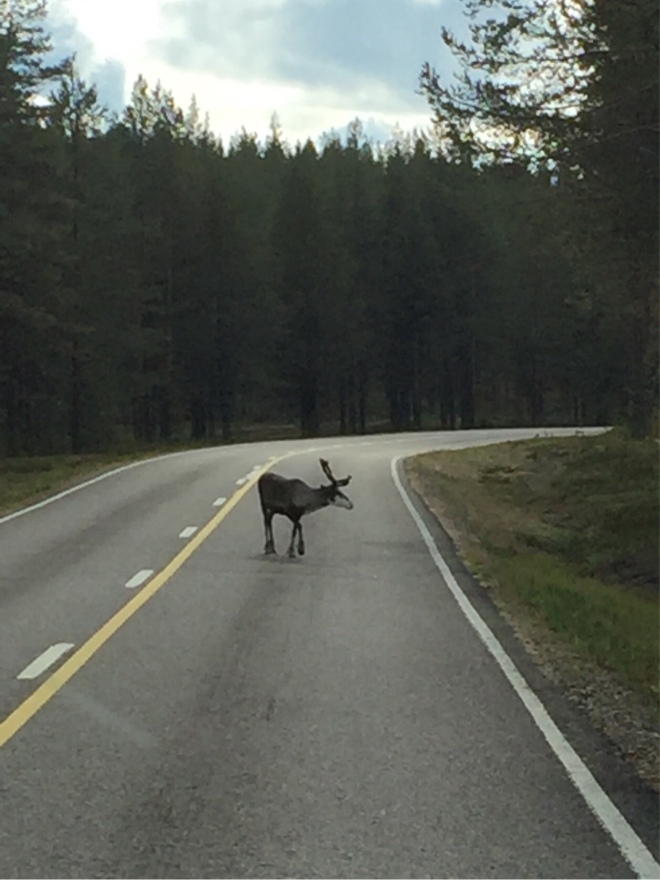 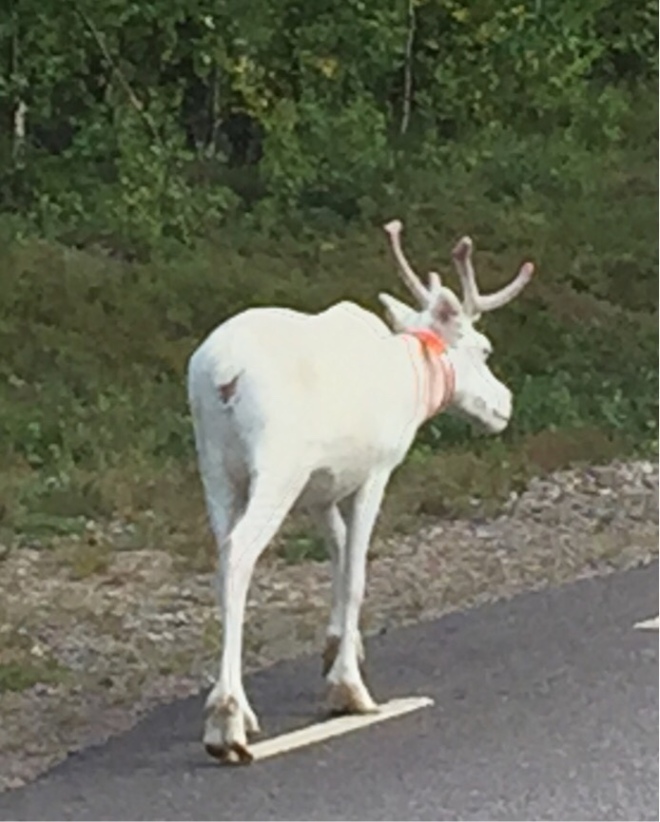 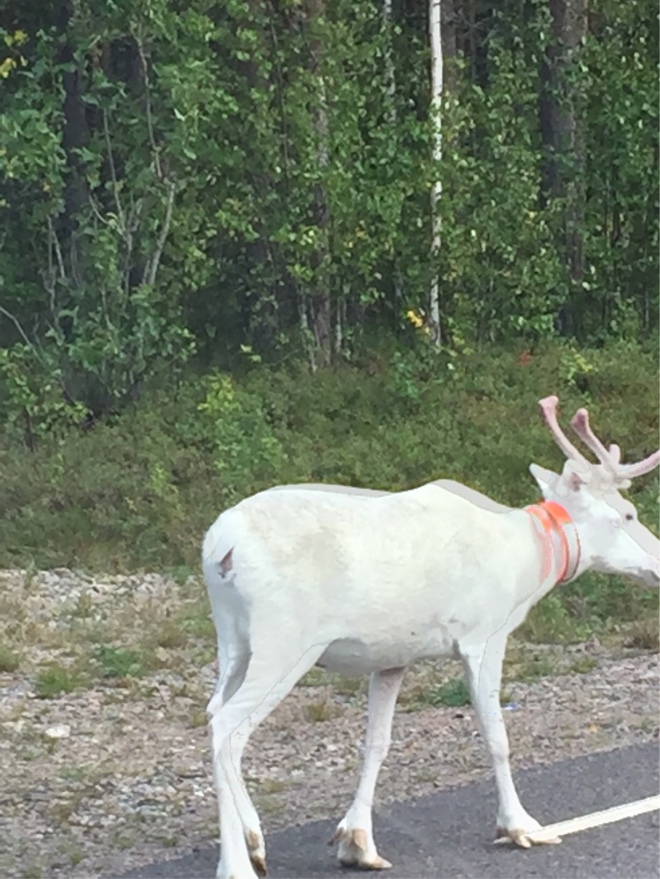 We’d been on the road for just about an hour when the tarmac started to deteriorate and then disappeared completely.

The next thing we knew we were bumping along on a very rough and muddy unmade road. Was the main road to Sweden?! We couldn’t see any alternative so we just kept going. At one point there were more potholes than road! It certainly gave our camper van a good work out.

After almost two hours of uncomfortable driving the road changed from mud to metal again just outside the holiday town of Sirkka where the popular Levi Ski Resort is located.

From Sirkka we continued on along a seemingly endless road which ran through national park that stretched as far as the eye could see. Again there was very little traffic and no sign of life and we agreed that it would be a terrible place to breakdown. 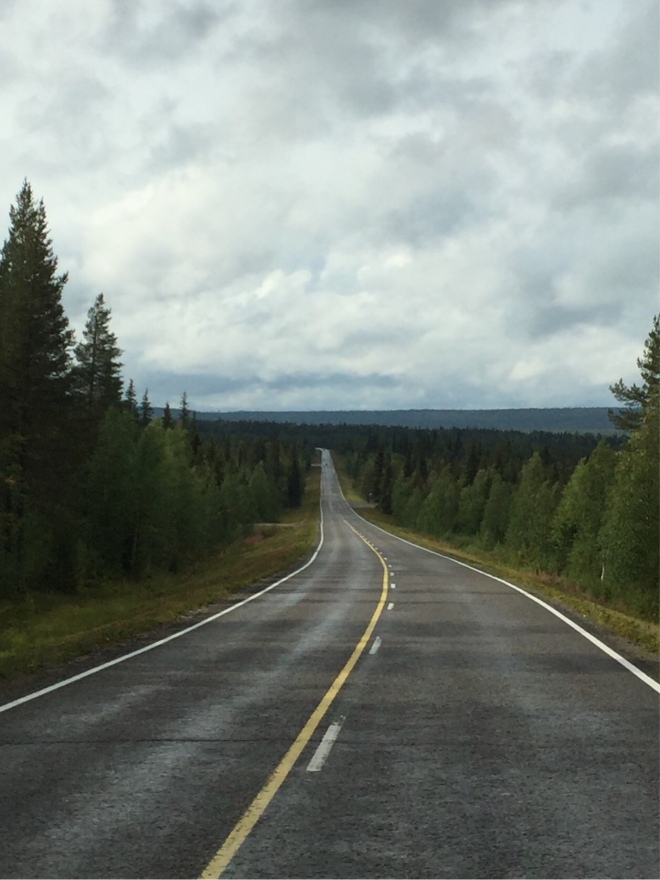 We crossed over the border into Sweden mid-afternoon and a couple of hours later reached the Arctic Circle monument in Juoksendi. 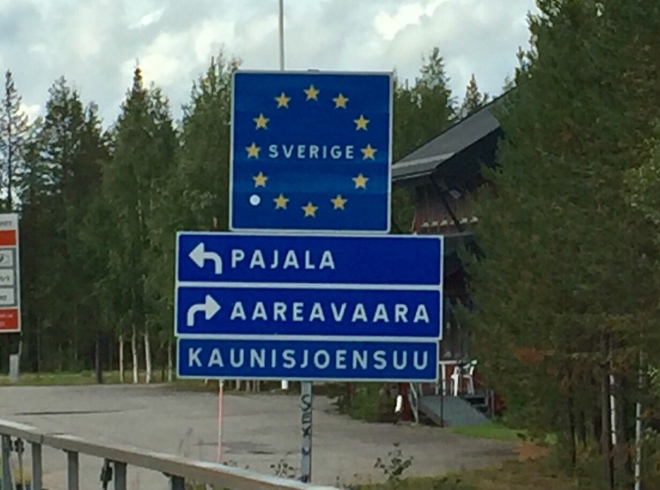 We had last crossed the Arctic Circle on a ferry in Norway. That crossing was marked with a simple single beacon-like structure whereas the Swedish crossing was a much grander affair. 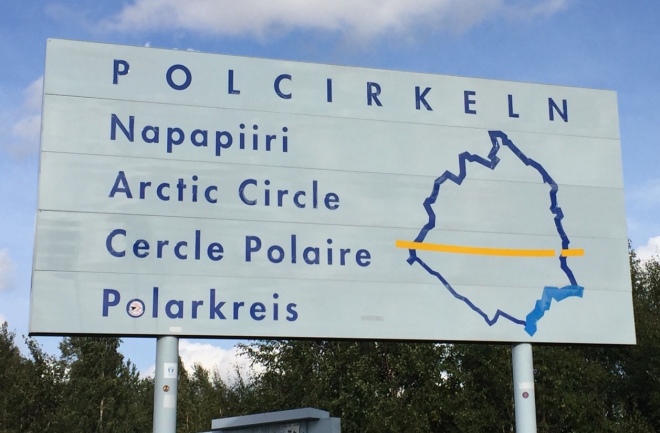 The focal point of the stop was a large metal globe at the centre of a circle of flags, each representing the eight countries that the Arctic Circle line runs through (Sweden, Finland, Russia, USA, Canada, Greenland, Iceland and Norway).

Large signboards explained that the Arctic Circle is the southernmost latitude where the midnight sun can be seen at the summer solstice. Further it explains the arbitrary and shifting nature of the line which drifts 15m or so north each year in a long, cyclical wave over a period of 40,000 years with variance of over 180km. Juoksengi is really only a temporary custodian of the slowly passing Arctic Circle line.

Temporary or not, visiting the Arctic monument was the highlight of the day and crossing back over the line, a real milestone.