Our trip to Corinth was a really memorable experience – quite apart from finding a great boatyard to store our boat over winter and visiting the fabulous archeological site of ancient Corinth, as described in my last blog entry.

When we were on the way to Almira Boatyard we hadn’t realised that we had crossed over the canal – the bridge is small and unprepossessing and the canal is so narrow that you are over it in a trice! On the way back we saw signs for the canal and stopped to take a look.

We were amazed at the immense sheer rock walls at each side of the canal – 79 metres high!

Built between the years 1881 and 1893, the canal connects the Gulf of Corinth with the Saronic Gulf in the Aegean Sea.

When it opened, the canal which is just 6,343 metres long, reduced the distance between the ports of the Aegean and the Adriatic Sea by 141 nautical miles.

Apparently I travelled through the canal on a ship as a babe in arms when my family came back to England by sea from the Middle East. My two older sisters both have vivid memories of this.

Nowadays at only 21.4 metres (70 ft) wide at its base, the canal is impassable for most modern ships so most of the boats that pass through it are pleasure craft. We agreed that we would definitely do the trip when we take possession of our new boat!

We also really enjoyed soaking in the atmosphere of the small village surrounding the archeological site of Ancient Corinth. One evening we went for dinner and not sure which of the numerous restaurants we should choose, spotted one with an open fire.

The wood crackling in the large grate smelt fragrant as we walked in -ahh, the scent of olive wood and grapevine cuttings was delicious.

There was just one old man in there enjoying his jug of Greek retsina and a chat with the lady owner who was sitting down with him.

There was no menu – the owner just told us what was available in Greek with the occasional word such as “beans” in English. We just nodded and said “kala” (good) to everything. We ended up with a beautiful meal of fried calamari, hummus, Greek salad, butter beans in sauce, home made bread and of course, a jug of local wine.

Every time we strolled through the village my eyes would be drawn to a large, bald, monolithic rock looming over ancient Corinth with what seemed to be a rambling fort on top.

It looked intriguing so on our last day we decided to venture up there before heading off from Corinth towards Igoumenitsa.

Wow! What an amazing place.

Acrorinth was continuously occupied from archaic times to the early 19th century and has a rich and varied history as a fortress and garrison inhabited by numerous different conquerors over the ages – including the ancient Greeks, the Romans, the Macedonians, the Byzantine empire, the Frankish, the Venetians and the Ottoman empire.

It only took about 15 minutes to drive up the steep winding road up to the bottom of the fort. From the car park, looking up, we could see three lines of defence protecting the citadel from the west.

We walked through the entrance up a steep cobbled road to the first gate, built in the 14th Century. Already the views were stunning but we had a long way to climb yet – 575 metres to be exact – and we anticipated the views would be incredible from right at the top.

The views were incredible 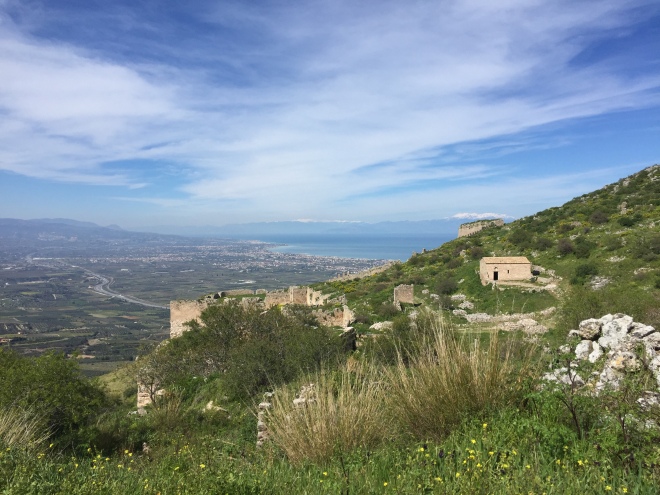 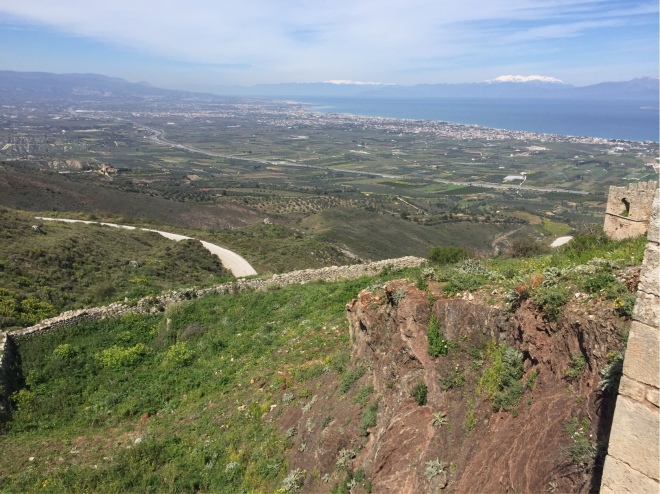 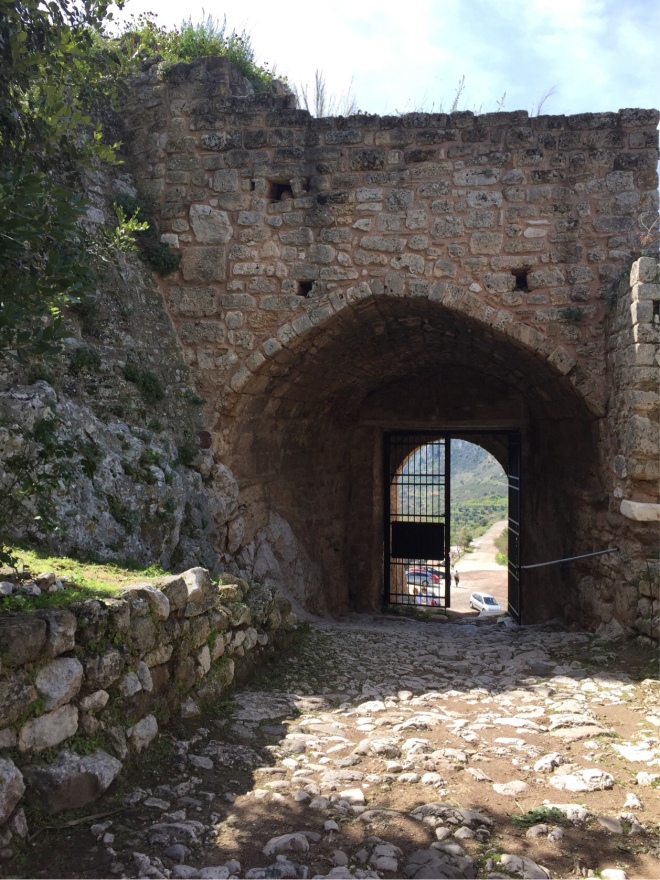 The site covers a much larger area than first impressions indicated. It really covers an enormous area and extends over the entire mountain ridge. There is much more than fortifications to be seen – before our eyes lay a complete city of ruins.

Within the forts were the remains of a whole city 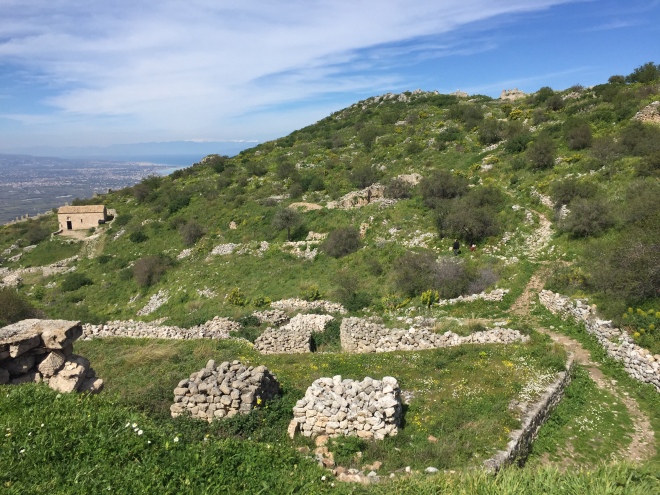 Slowly we made our way up to the second gate which was built by the Venetians. It was amazing to peer through the arrow slits in the walls leading off to the sides of the gate and imagine sitting there waiting to fend off attackers with your bow and arrows.

Up and up we went to the third gate which had a rectangular tower on either side. One was from the 4th century BC and the other was from the Byzantine era. 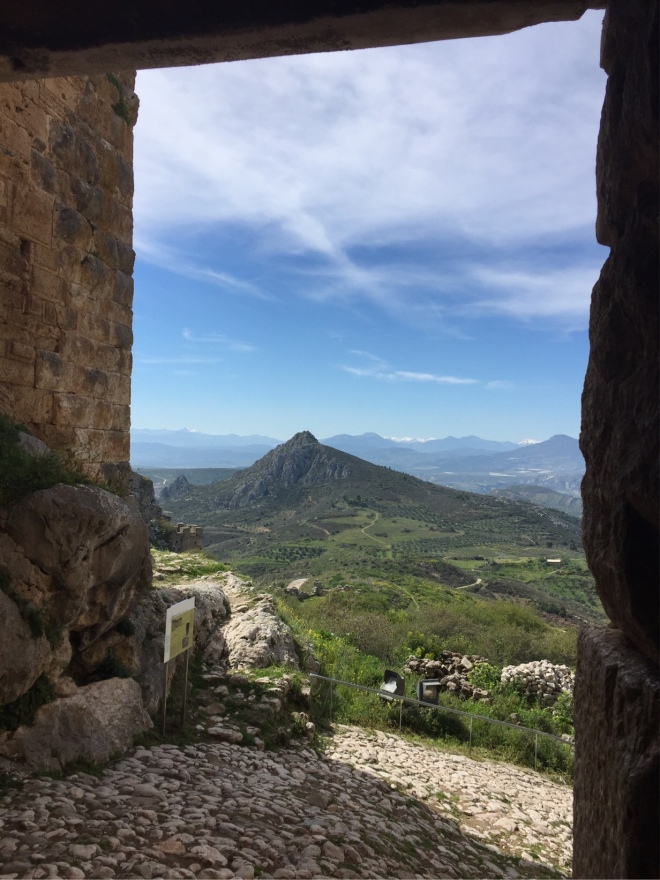 We wandered through the ruins stopping to explore secret paths and examine a small tower, the remains of shops, a temple, homes and an underground spring (the source of the city’s water supply). Eventually we climbed up the rugged path to the summit where there was a high Frankish built tower on the west side from which there were even more breathtaking vistas than we had encountered earlier. 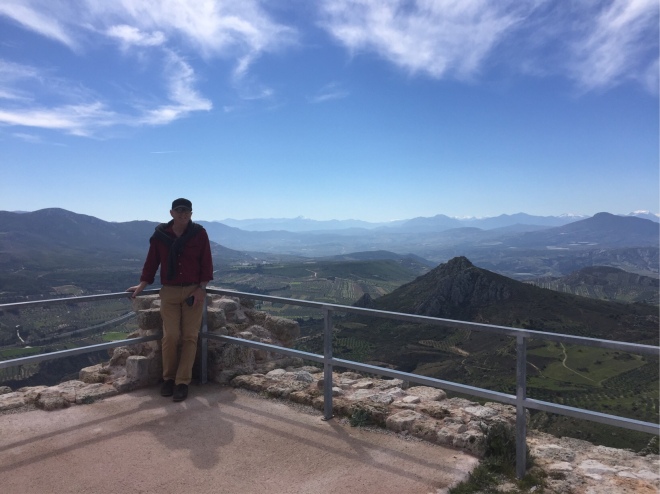 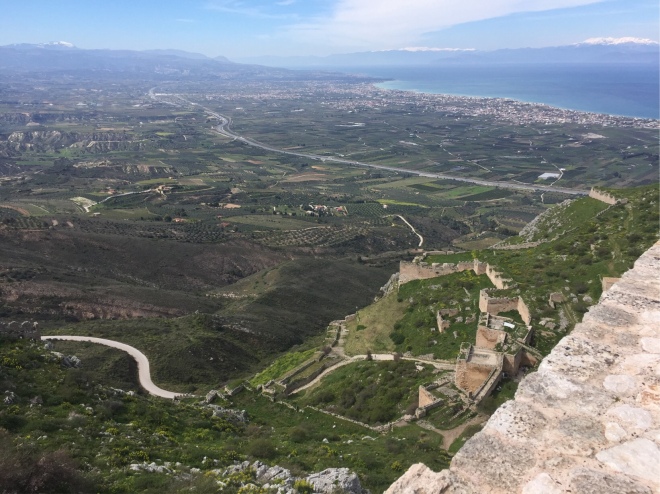 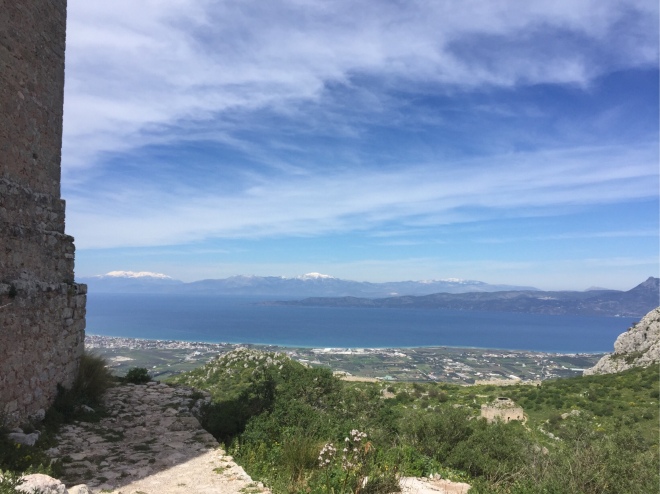 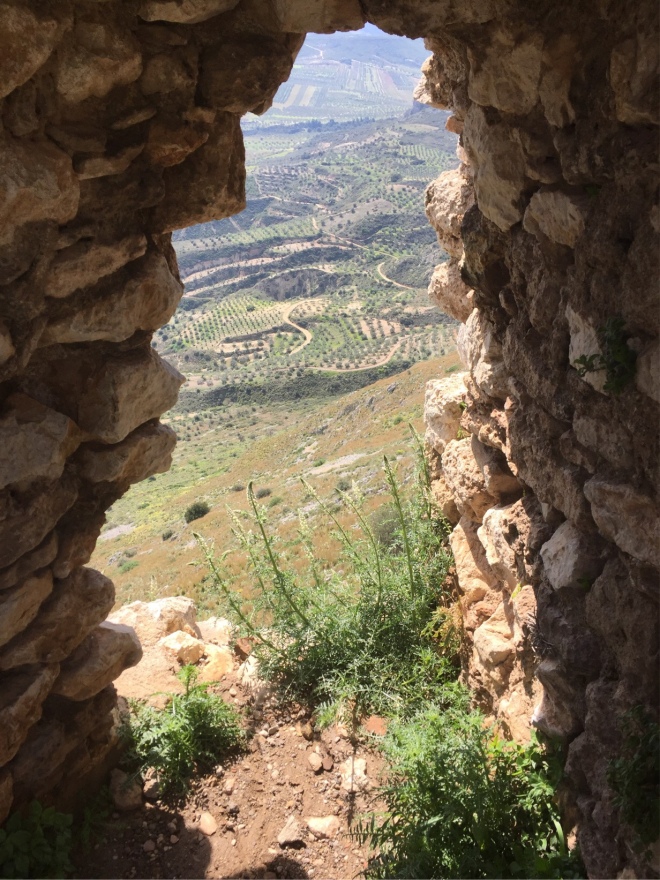 2 thoughts on “Breathtaking vistas, a 19th century engineering feat and a fireside dinner”