Just under two weeks after leaving Indonesia we finally caught up with the tail end of the Sail Malaysia rally fleet, just in time for the last rally event at Pangkor Island Marina.

We left Indonesia from Tanjang Penang on Tuesday 17 November after an amazing four months travelling on our trusty yacht Bali Hai from one end of the Indonesian archipelago to the other.

It felt like we had barely scratched the surface of the place and both of us definitely want to return to explore more areas and to get to know better some of the places where we had stopped .

It seemed to us that every place we went to was more extraordinary than the last – in some ways each stop was like going to a different country. I suppose it is like looking at different facets of a chandelier – each individual part reflects the light in a slightly different way, but together they make a wonderful shimmering, delightful whole.

I feel so privileged to have had a peek at the lives and culture of so many different peoples. It has been the most eye opening experience.

We were the last Sail2Wonderful Indonesia Rally yacht to leave Tanjang Penang and it felt strange to be the ones “closing the gate”.

We had an uneventful trip to Batam Island where we anchored for the night. We were woken at 5.30 am to the sounds of someone coming alongside.

Thoughts of pirates, robbers or other scoundrels passed through our minds but no, it was just a couple of guys from the Indonesia navy coming “to check we were OK”. Interestingly the boat was unmarked and the men were dressed in fatigues and carried guns but no ID so who knows if they were for real or not!


We set off at the crack of dawn to cross the Singapore Strait. We had often seen the hundreds of cargo vessels that ply their trade up and down the strait from the air when coming in to land at Changi Airport.

Never in my wildest dreams did I expect to be threading my way through them on Bali Hai to get to the coast of Malaysia.

In the event it was an easy crossing and the only heart stopping moment was when we saw an oil rig, thought it was a stationery, as you would and then realised it was moving! It had engines and was bustling along at a very acceptable speed! So we stopped trying to go in front of it and diverted off our course to go round it. It was, after all, MUCH bigger than us.

After a few hours of uneventful motoring through the busy Mslscca Straits we passed under the long road bridge that links Singapore with mainland Malaysia. I went over that bridge in a car in 1984 and again, could not have dreamt that one day I would be sailing under it on my way from Indonesia to Malaysia!

We arrived at Puteri Harbour Marina mid afternoon and for a moment felt uneasy as we couldn’t raise the Marina staff by radio or Satellite phone.

We motored gently in and moored very easily at the end of a finger wharf.

After the basic but lovely anchorages in Indonesia, Puteri harbour Marina was somewhat overwhelming. Bright, shiny and new with upmarket shops and restaurants, it was a world away from dugout canoes, cheeky kids and stilt homes.

The customs and Immigration process was a doddle. We were taken by golf buggy to a smart new ferry passenger terminal, and told to sit down in the waiting area. A few minutes later our driver appeared with our passports stamped and our ship’s papers signed by the Harbour Master. Too easy! It cost just a few dollars for this assistance and absolutely nothing in entry fees.

We spent a lovely couple of days catching up with laundry, getting Malaysian SIM cards, restocking our fresh food and even bought some wine. Also enjoyed a couple of European style meals – including great fish and chips at the Marina cafe.

We met a couple of boats from the Indonesian rally including Island Bound, Smart Choice and briefly, Mike from Tashi Delek who was just about to leave with wife Carol to stay first in Singapore with family and then on to the UK.


Travelling onwards in the Malacca Strait to catch up with the Sail Malaysia fleet, we left early in the morning, stopping for the night at a little island called Pulau Pisang where we were joined by Persephone with Brian and Sandy on board who had also been on the Sail2Indonesia rally and who had spent a week in Singapore.

We sailed together to our next anchorage, Pulau Besar, which is reputed to be haunted and also to possess magical qualities. It looked very pretty and had some interesting history so we promised ourselves to explore the island when we next visit this area.

The trip to there was great as we actually had some wind and were able to sail without the motor on for three or four hours! Wonderful!

We had to dodge scores of fishing boats with drift nets but at least they were reasonably well marked with flags and white floats. We also encountered many large container and other cargo ships so we were kept on our toes most of the day.

We had a huge storm late in the afternoon which was very welcome as it cooled things down giving us a great night’s sleep. The skies were still brooding and stormy as the sun went down. 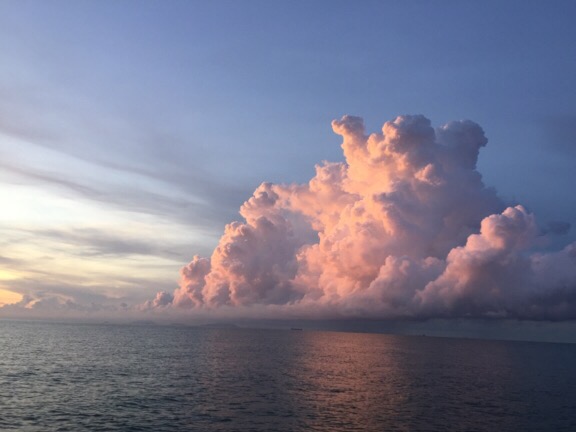 Port Dickson was our next stop – a magnificent Marina with amongst other things, a beautiful pool. More yachts from the Indonesia rally were there and we had a lovely evening at a Chinese seafood restaurant with the crews of four other boats.

We intended leaving the following day but the lure of a cooling pool and the chance to rest up for a day was too tempting so we decided to stay one extra night before heading for Pangkor Island Marina.

Travelling to Pangkor Island Marina we felt as though we were almost part of the rally again as we travelled in convoy with four other boats.

Our first night was spent at Port Klang, Malaysia’s largest port. It was enormous! The container terminal was only one part of the port and it went on for as far as the eye could see, with every container bay full and working hard and fast. Many of the ships were Chinese.


The water round the port was spectacularly dirty – polystyrene food containers, the ubiquitous water bottles, containers of every kind and random objects that had just been tipped over the side of all the working boats. I reckon that’s where the “clean up” awareness programs need to start – with the crews of fishing boats, container ships and other commercial vessels!

After another day motorsailing, then anchoring in the evening, we had a great sail the following day to Pangkor noticing on the way several little islands that we would like to get to know when we are back that way.

The entry into Pangkor Island Marina is a bit tricky as there are some extremely shallow places but we made it in to this welcoming, extremely well run  place.
At last we had caught up with the Sail Malaysia fleet – albeit the tail end stragglers!

We had just missed the rally dinner the night before which apparently had been a spectacular affair but a BBQ was scheduled for that evening – a happy happenstance as it was my birthday that day!


Coincidentally it was also Kelly’s birthday (from Quintessa) and her husband Andy had hired the band who had played so well at the  dinner the night before.
Despite a huge downpour we had a great time and enjoyed a beautiful chocolate cake made by professional baker Kim from Flour Girl.