It was a perfect sunny day when we left La Malachère, France heading to Lausanne in Switzerland but there was frost in the shade and piles of snow on the roadside despite the relatively warm day.

We had only been driving for an hour and already we were starting to see a lot more snow.

We stopped to stock up on food and other supplies (I.e. French wine) in a small and pretty town near the Swiss border called Pontarlier. This town was famous for the production of absinthe until its ban in 1915. One of its famous residents was the distiller Henry Pernod.

As we climbed higher we started to see ski resorts and snow capped mountains in the distance.

As we got nearer to the border with Switzerland we drove into a traffic jam with quite a long tailback. It took us over half an hour moving at snail’s pace to reach the border.

Then we found out the reason for such a long jam – it was because tickets for the Swiss toll roads were being sold manually. Every car was being stopped and the driver asked if they wanted a ticket! What a waste of time. As we were taking the country road route we didn’t need a ticket – surely those not using toll roads could have been directed to drive straight through?!

Finally we were off again driving along near empty roads with a magnificent view of the Swiss Alps.

We stopped for a break at the roadside near a village called Pompale and after something to eat went for a short stroll along a narrow lane where we found a curious cemetery where all the headstones were exactly the same. The cemetery turned out to belong to a nearby covent which was tucked away in a valley nearby. 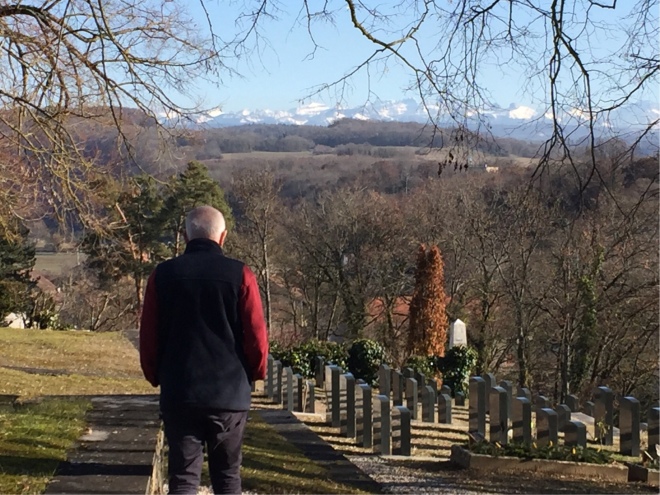 From there we drove on to Lausanne and found a very inexpensive spot to stay for the night right next to the immensely beautiful Lake Geneva. 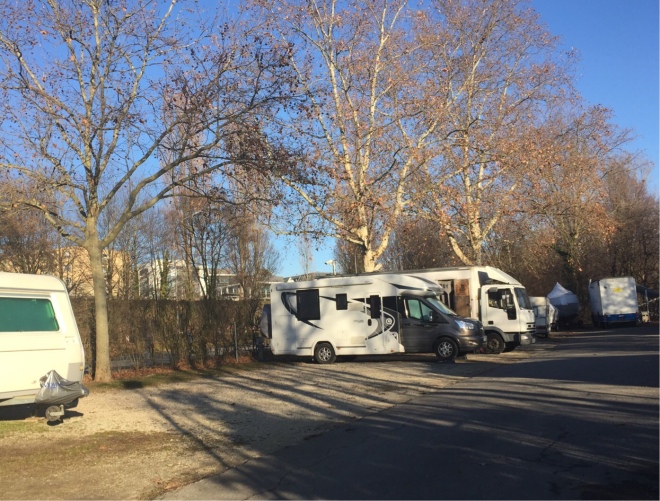 As soon as we could manage we went for a magnificent walk along the busy path by the lake (it was a weekend). It was just stunning – like a perfect picture on an old fashioned chocolate box or biscuit tin lid.

The next morning we took the bikes and cycled round the lake as far as we could, leaving our bikes under a tree to walk when cycling was no longer allowed.

This was a truly beautiful place and it was hard to drag ourselves away but we had to keep moving as we had a date in a few days time to meet up with my sister and her husband in Menton, France for the famous lemon festival.

As we left Lausanne we were intrigued to see the hillsides covered with small vineyards. We had never heard of Swiss wine but we learnt later that vines have been grown in the country since Roman times and in 2016 the country produced 108 million litres of wine – the great majority for domestic consumption.