After an exhausting drive the previous day when we were turned away from the Bosnian border with Croatia, and had to reroute through Montenegro, we were faced with the real possibility that the same thing could happen to us when we reached the Albanian border.

We had left the original vehicle registration document in The Netherlands thinking it would provide proof of ownership if our van was stolen. However, in some non-EU countries it is the only document that is accepted by border control and we now knew we should have it with us.

So it was with trepidation that we approached the Albanian border. But first we had quite a harrowing drive up a one-lane and very rugged (pot-holed and very sparsely tarred) mountain road. Admittedly we selected the no tolls, no motorways, option on our satellite navigation system but this was the worst road we had been taken on to date – did we turn off too early perhaps?

The other drivers in the road were part of the problem – they were roaring along as though it was a six-lane highway and scarcely pausing while we stopped to make room for them to pass or overtake. Crazy!

At one point we spotted a wing mirror in the middle of the road and then caught up with a driver who had sped past us earlier and was now parked on the side of the road. They must have clipped another car coming towards them and the mirror snapped clean off.

This area was very rural and we saw lots of farm animals, old ladies in traditional dress and at least one mosque. We also saw quite a number of parked police vehicles and figured that this rugged approach to the border crossing might be used regularly to traffic refugees.

About 15 kms from the border we were stopped in the middle of the road by a local man driving the other way. He had seen our French number plates and having left France some time ago was desperate to chat to someone in his native tongue. Sadly our school student French would not pass muster and after a couple of minutes we all moved on.

Shortly before the border with Albania, the road suddenly widened, was tarred and even had a dotted white line.

We approached the border nervously not knowing whether we were going to be turned back or not. The thought of going back down the mountain on that horrendous road was not appealing at all. Besides which, if we were turned round how on earth would we get to Greece in time to keep our date with the yacht broker to see the catamaran we were interested in?

Although they were reluctant to do so, after some discussion, the Albanian border guards did let us cross into their country. We had to answer quite a lot of questions including “You come on holiday to Albania?” “Err no, just driving straight through to Athens” and there was much consultation between themselves.

It was such a relief to finally be driving through Albania – next stop Greece!

We were only in Albania for a total of six hours so it’s probably unfair to judge the whole country on our fleeting impressions. However, one thing I can say is that the driving is terrible! It’s like being in the Wild West – no rules, every man and woman for themselves, and everything done at high speed. It’s as if a whole load of 16 year olds had been given a car with a supercharged engine and allowed to drive without instruction or a test!

The other abiding impression of Albania was that there was a lot of poverty. We saw a distressing amount of people standing on the roadside waving small bags of biscuits or a small amount of fruit for sale. There were a lot of farmers still using a pony and trap or a donkey for their work and any tractors we saw were very ancient. 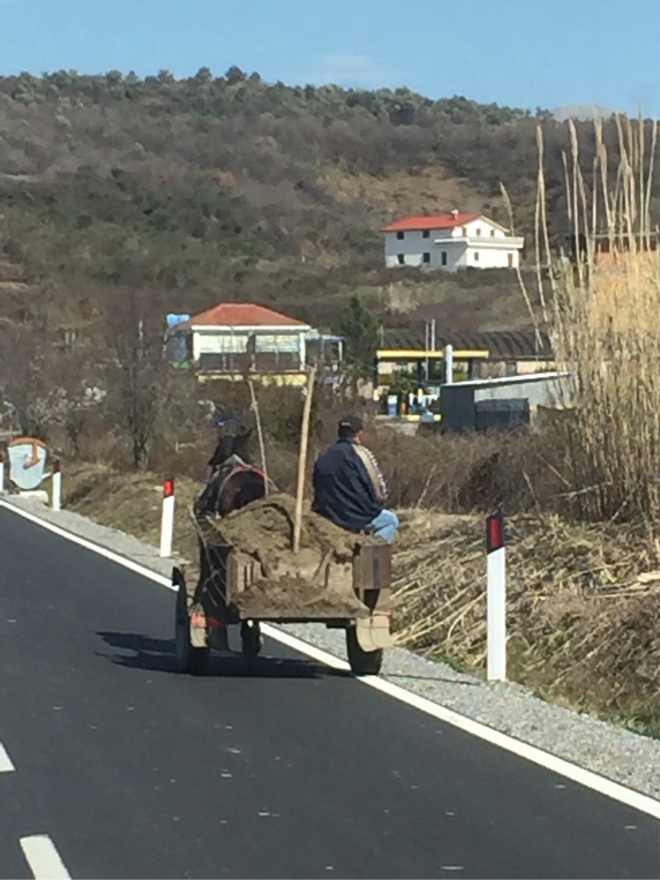 As we drove through villages and small towns there were lots of men around their 30’s and 40’s just hanging around looking bored and hopeless. 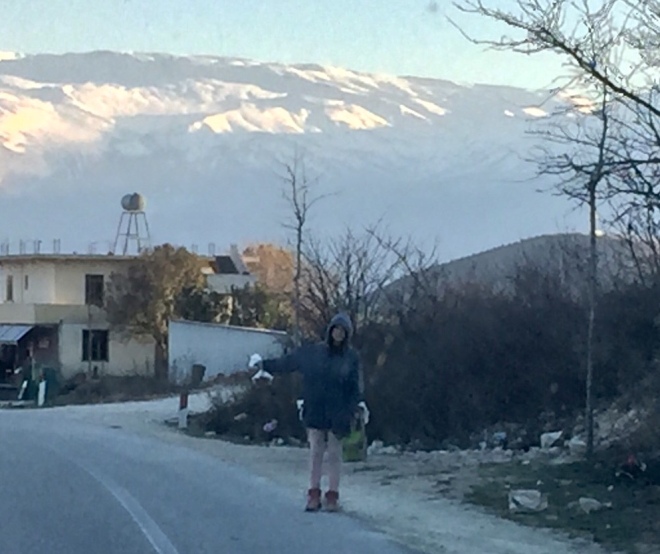 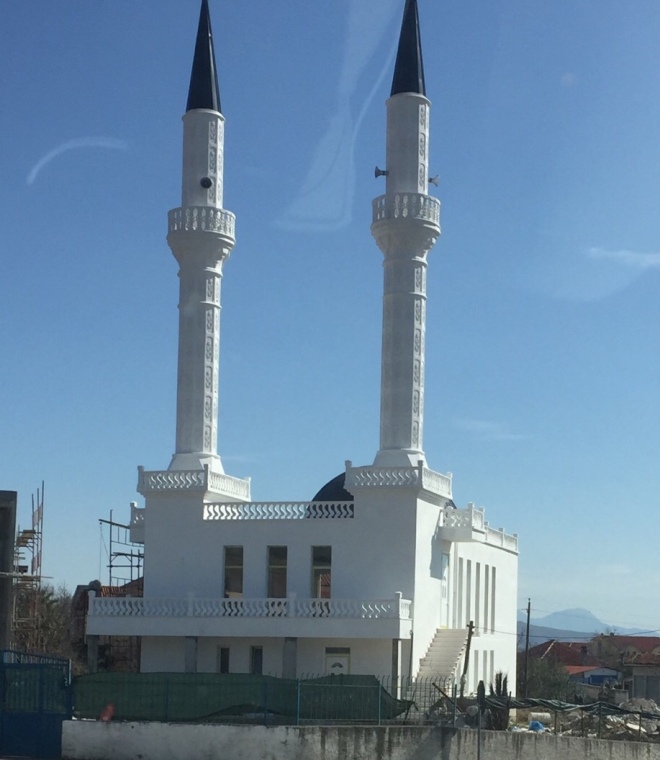 We also saw quite a lot of younger men with small suitcases and bulging plastic bags, almost certainly refugees, who were trying to hitch rides or waiting at bus stops. There were also a lot of police check points where cars were getting checked – we weren’t stopped at all but many other vehicles were.

It was starting to get dark by the time we reached the Albanian/Greek border. Thankfully there were no issues entering Greece- being an EU country it doesn’t require the additional paperwork required for non-EU countries. 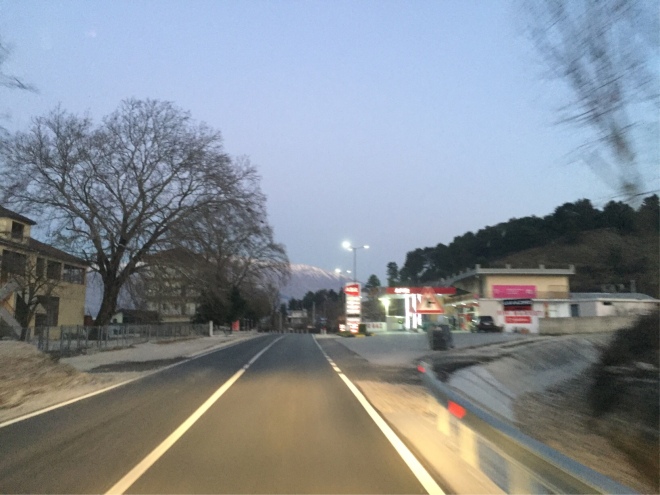 We made our way down the mountain road in complete darkness. There were no street lights and our headlights were woefully inadequate for this dark and lonely road.

Gradually we began to see some signs of life and the visibility was better with a few lights to guide us. After about 20 minutes we arrived at the little town of Kalpaki.

Fortunately, the town provides free parking for campervans in a small paddock next to the school.

We were grateful to be able to park in this quiet little spot but before a few minutes had lapsed a group of young lads had come to say “hello” – they seemed very excited to see us and we wondered how quiet and boring their lives must be to get excited by the arrival of a couple of “old” people in a campervan!

After explaining through gestures that we were very tired, they bade us a cheery “Kali Nichta” and wandered off.

The following day we woke to discover what the landscape was like in Kalpaki. We were in a valley with Albania just over the mountains. Walking down the Main Street we could see carved on the hillside the word “OXI” meaning “NO” – commemorating the response of the outnumbered Greeks who pushed back the Italians when they invaded from Albania in 1940. A statue of a soldier stands on a nearby hilltop in recognition of the bravery of the Greeks killed in the invasion.

After a quick walk to the other end of the village we restocked with bread, fruit and veg and other essentials and hit the road, headed for Athens and our date with a yacht broker.

2 thoughts on “Reaching the Albanian border with trepidation”