I can’t deny that I felt a little thrill come over me when the white cliffs of Dover came into view as we sedately chugged across the narrow channel on the car ferry between Calais in France and that iconic part of England.

It was the first time that we’d arrived in Britain as tourists. Sure, we had flown in from Australia scores of time to visit family and friends but this time was different as we had planned to tour round parts of the country we had never seen before.

Of course we were going to spend time with our loved ones and attend a family wedding, meet new babies and have reunions with friends but there were also going to be some tourist adventures that we were also really looking forward to.

Our first foray into unknown parts was to darkest Devon for the wedding of my nephew to his lovely partner. It was held at a beautiful grade II listed farmhouse in a secluded valley, set in over 90 acres of farmland.

The whole wedding was fantastic from the birdsong-accompanied ceremony in a small quarry to drinks in marvellous sunshine in the gorgeous garden and and a fabulous meal and party in the converted barn.

After a great weekend at the wedding venue in Middle Marwood we traversed the super-narrow high hedged lanes (seriously narrow – our camper only just squeezed through and at one point we lost part of the rear mudguard on a tree root) and made our way to the nearby surfing beach of Woolacombe.

This glorious North Devon beach was awarded the accolade of Britain’s Best Beach in 2015 by TripAdvisor, while also ranking in their polls as fourth in Europe and the thirteenth best in the world!

We had a wonderful walk along the beach which is three miles (4.8 km) long, enjoying the beautiful, almost empty, stretch of sand and the small waves rolling in from the Atlantic Ocean.

That night we used our newly acquired book “Brit Stops” – a piece of travellers’ gold. This volume contains details of hundreds of pubs and other businesses that are willing to have caravans and motor homes park in their car parks overnight – mostly for free.

Of course there is no such thing as a free lunch – the pay off for the pubs, farm shops or whatever, was that you bought some drinks or had a meal.

Given that we all have to eat anyway, the whole concept worked excellently for us, especially because in Britain there are no Aires like the ones in France, no free camping on the side of the road as in Scandinavia and very few 24 hour parking as found throughout Europe.

Our first Brit Stops night was in an eccentric and delightful Dorset village (population 500) called Loder.

As we were driving through the start of the village we noticed a couple of strangely dressed scarecrows outside the typical Dorset country cottages.

It wasn’t until we got into the local pub the Loder’s Arms, that we found out that the scarecrows were part of their annual village scarecrow competition!

Held every year since 2011, this quirky (and typically English) competition has been held in the village with everyone from the pub to the vicar, the school and a large number of the households taking part.

Each year there there is a theme – on this occasion it was Jack of All Trades. There were many extremely inventive entries including “Bob the burglar” A Zookeeper/Big Game Hunter, two Leonardo Da Vincis, “Do it all Dan” “Jack Bungle” (previously a Carpenter, painter and now plumber), the local Methodist Church Minister, and many more.

The village itself was very pretty and it was easy to see why it had won several “best Dorset village competitions over the years.

It was a great couple of days what with walking the scarecrow trail, visiting the local church, parts of which dated from the 12th century and with some enchanting stone carvings, and a lovely dinner at the Loders Arms. 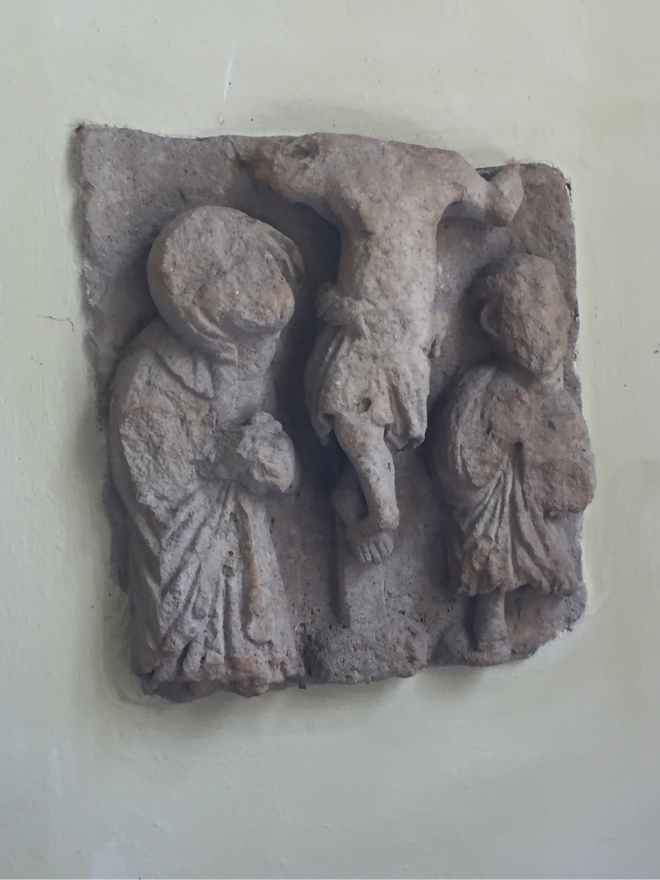 All too soon it was time to move on once again and we set off to brave the narrow Dorset lanes in our what felt like our far -too-large van.