Back in Alimos Marina in Athens after a lovely few days cruising a handful of Greek islands on our newly acquired Lagoon 420 catamaran, it was time to get some important projects happening before we left Athens for the almost 3,000 kilometre road trip back to spend Christmas with our daughter and partner in Pijnacker, The Netherlands.

One of possibly the most mundane but to me, the most exciting of undertakings was to identify, purchase and install a washing machine. Never before had we enjoyed such luxury on a yacht but with a water maker that can make 140 litres per hour and a generator that has an output of 17.5 kva we easily had the necessary elements to support one. 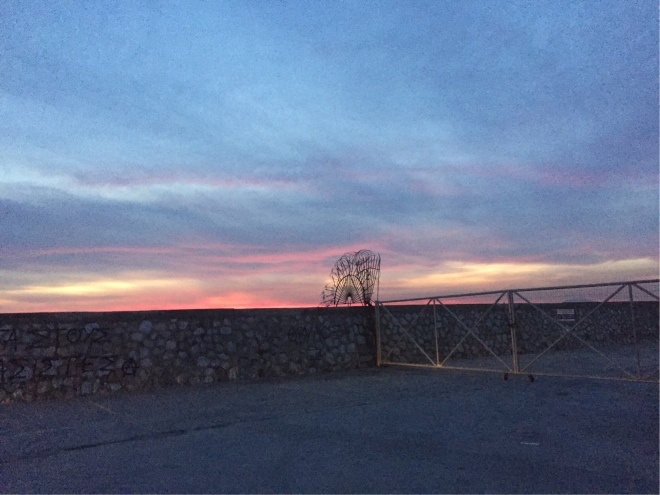 While shopping at IKEA near Athens airport we had spotted a huge electrical store and in there discovered a washing machine designed for apartment living (Athens is full of apartment blocks). The slim and sleek machine is a top loader but has a drum on its side similar to a front loader. Unlike many other machines of its kind, there is a cold wash option – important if you want to save fuel. 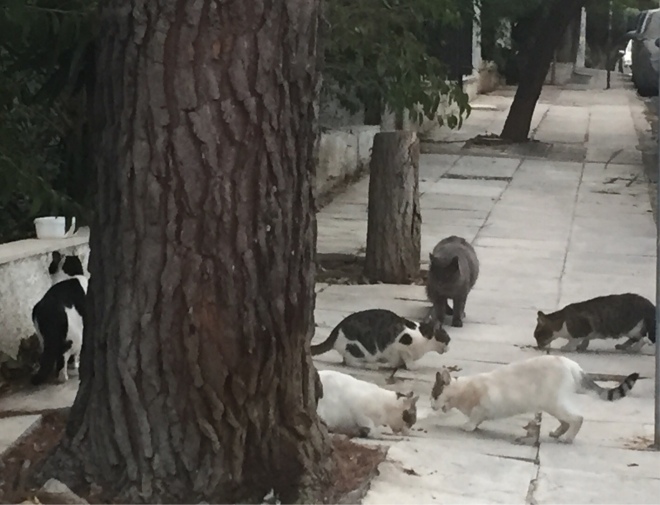 We ordered it and rather than have it delivered, decided we could take it back to Sunday in our campervan. When we went to collect it we realised it was far too heavy for us to lift on and would have to have it delivered. Trouble was, we didn’t have a Greek telephone number and they couldn’t deliver it without a local phone number. Fortunately, Manos who with his father, Nicos, previously owned Sunday, very kindly offered the use his number. 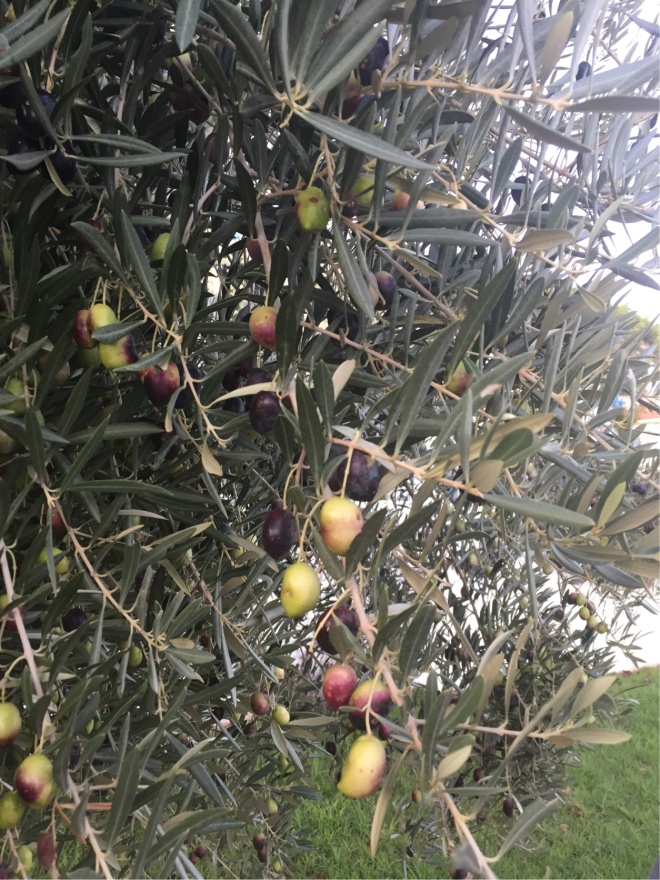 So on the appointed day the delivery people called Manos, he then phoned us and Jonathan went to meet them at the wharf. The machine was then pushed on a trolley along Pier Six to where Sunday is tied up.

We were rather worried about getting the machine on to the boat as the paraselle – a nifty gang plank that moves up and down and in and out using a hydraulic system- might not cope with two hefty delivery guys and the machine all on it at the same time. 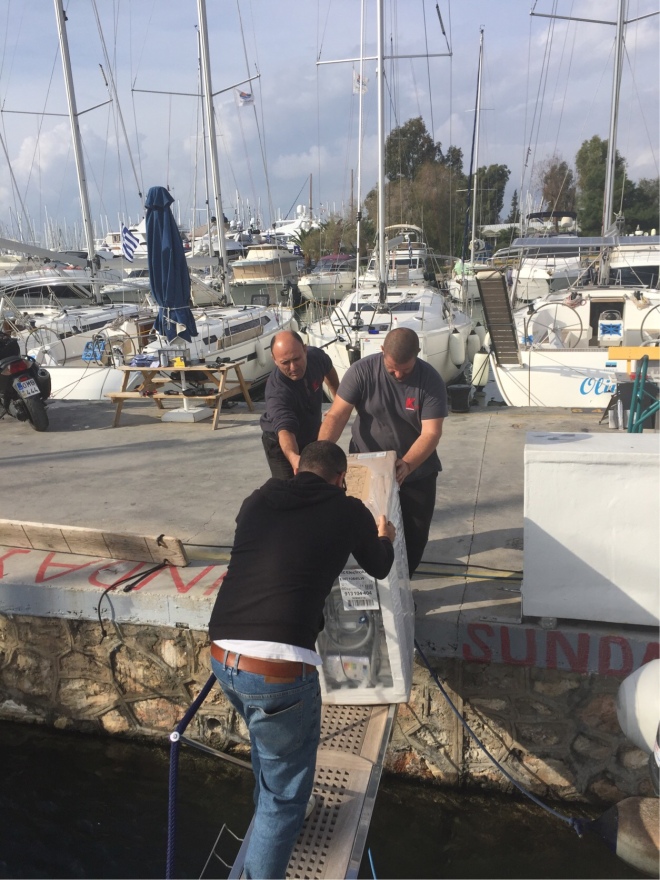 In the end Manos went over first and one of the delivery guys manhandled the machine onto the gang plank. From there Manos supported it and somehow managed to get it onto the boat. How it didn’t fall in I don’t know but at last it was on board.

The good news was that it was on board but the bad news was that it was on the rear starboard bed rather than in its allocated spot where the shower once was. Apparently it had to be unpacked and the feet adjusted but time was short and there were other deliveries to be made! So the washing machine would have to remain uninstalled until we could find someone to help us lift it down.

In the meantime, there were plenty of other jobs to be done and in between, lovely walks to be had along the sea front – one way to beaches where people were still swimming in late November and the other to another, classier marina crammed full of super yachts and a few enormous sail boats with masts taller than apartment blocks. 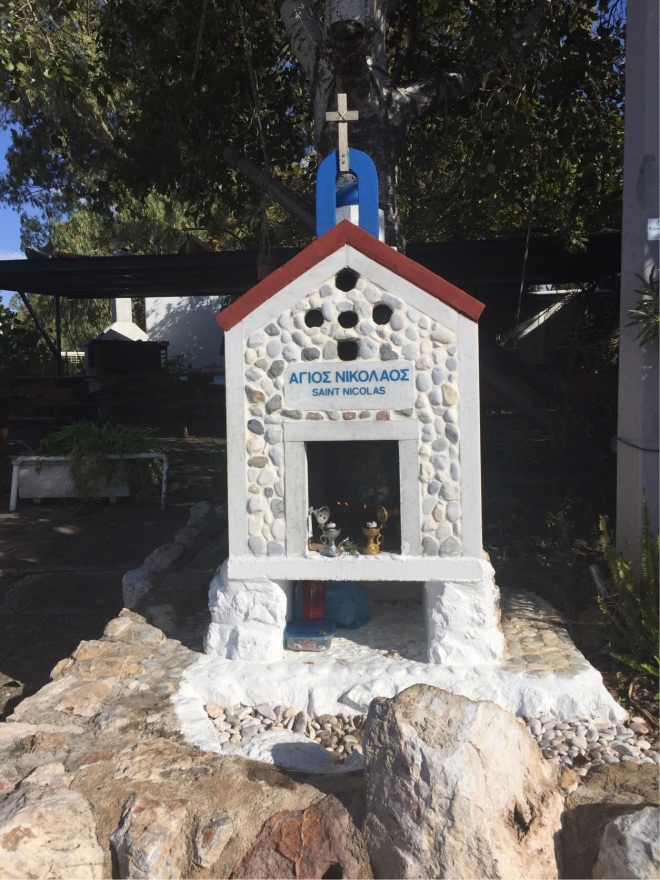 We had been keeping our campervan (and sleeping on it for its security) in the marina carpark for over a month but one day we found a note saying that this was not allowed. One of the security guards was fine once he knew we were buying a boat but another guard wouldn’t have a bar if it and told us we had to leave so we decided to take it back to our favourite campsite in Corinth for our last two weeks in Greece. 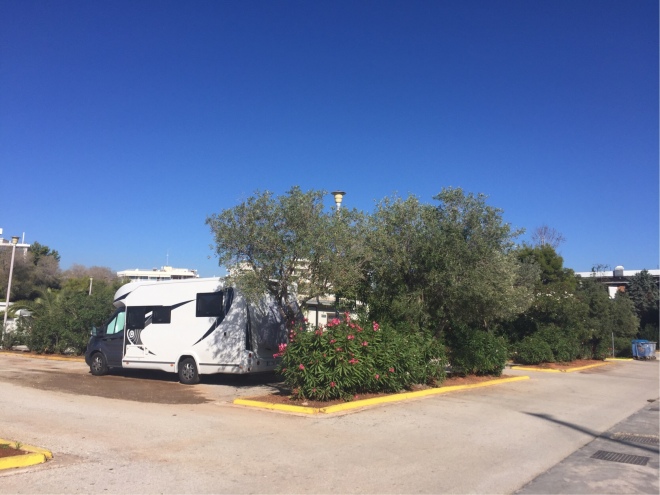 It was great to spend the whole time on Sunday without having to go back and forth to the van. To be honest, it was just as well we were there as we had numerous tradesmen arriving at various times – often early in the morning.

One of them was a scuba diver – we had to call him in to look at our port side prop because just as we entered the harbour after our short cruise on Sunday, we heard the telltale falter and a change in tone of the engine indicating that something had wrapped itself round the propellor. We had experienced this many, many, times in SE Asia so there was no mistaking it this time.

Sure enough, a large piece of green , fishing net came up with the diver who then dived again to take the prop off to extract more pieces that had got caught up round the shaft.

We also had a couple of guys come to stress test the batteries. As luck would have it they had to access under the bed in the starboard cabin and in order to do that they had to take the washing machine off so voila! Our washing machine was finally in place. The battery guys were extremely good humoured about it.

Soon Captain Birdseye had it plumbed in and for the next few days the boat resembled an old fashioned Chinese laundry as we gradually caught up with the backlog of washing.

We also had two quotes for canvas work including new clears around the helm and sunshades right round the cockpit as well as some repairs to the sailbag and a few other bits and pieces. 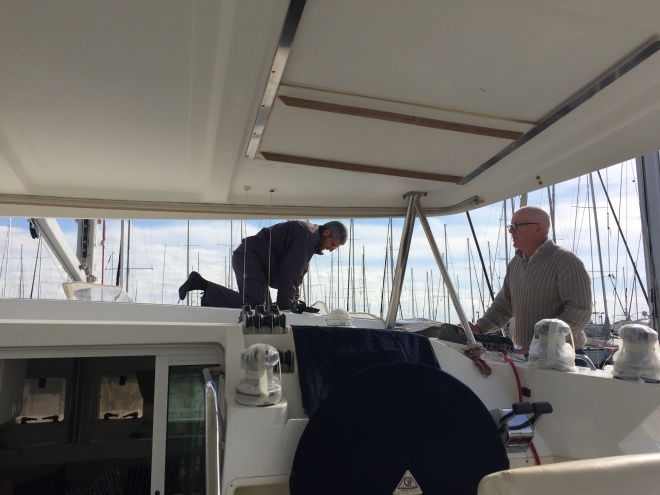 In addition to this, we had our AIS (bought in Australia) and some other new electronics fitted and a quote for a massive overhaul of our two engines which will happen when Sunday is out of the water in January.

Having this kind of work done is very expensive but we had factored the costs into our calculations. Too many people buy a boat and then sail into the sunset without doing necessary checks and replacements, overhauling and servicing. So often you see them on YouTube or Facebook bemoaning the fact that their engine/s have packed up or their batteries aren’t holding charge or whatever. There’s no guarantees that things won’t go wrong (let’s face it, there is always something to fix in a boat) but we hope that we have done enough to make Sunday as reliable, sea worthy and safe as possible.

We had a day off from all this organising on my birthday when I was thoroughly spoilt and Captain Birdseye bought me roses, a beautiful gift, made me breakfast and even baked me a cake! 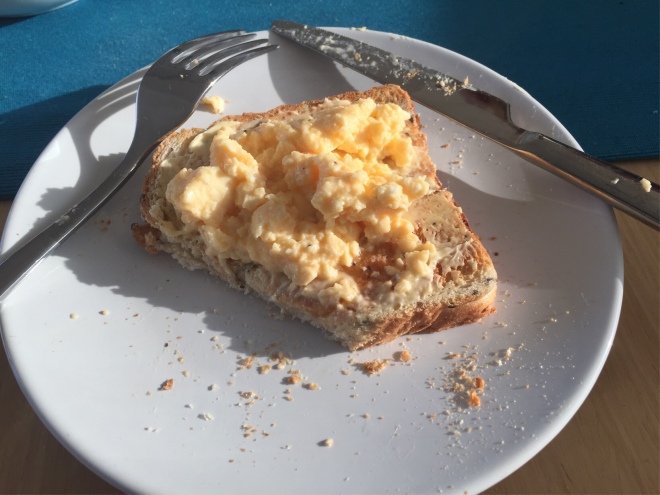 We had a lovely long lunch in a cafe on the beach not far from the marina where we watched spectacular storm clouds gathering over the island of Aegina and enjoyed a delicious meal. Couldn’t have wished for a better place to celebrate! 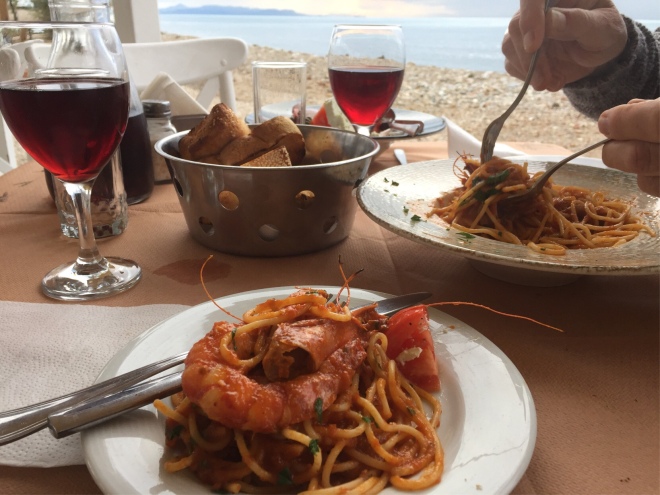 4 thoughts on “Important delivery, checks, servicing and time off”